SpaceX, the private space exploration company led by Tesla chief executive Elon Musk, successfully completed an emergency escape simulation in Florida that could allow it to launch Nasa astronauts into space as soon as March.

The demonstration on Sunday, broadcast live, involved its Falcon 9 rocket blasting off and travelling at 1,200 miles per hour for 84 seconds before engineering a deliberate engine malfunction. The malfunction triggered the spacecraft’s Crew Dragon capsule to unhinge from the rocket using eight onboard thrusters, carrying it a safe distance away while Falcon 9’s engine shut off and its booster purposely exploded, creating a ball of fire in the sky.

The unmanned capsule, with two mannequins aboard, then re-entered Earth’s atmosphere and parachuted to the Atlantic Ocean, demonstrating how astronauts would be saved in the event of an engine shutdown. Emergency teams from SpaceX and the US Air Force then simulated how they would rescue astronauts in the choppy water.

Jim Bridenstine, a Nasa administrator, tweeted his congratulations and added: “This critical test puts us on the cusp of once again launching American astronauts on American rockets from American soil.”

The last time Nasa astronauts launched from the US was in 2011, when it ended its space shuttle programme. It has since used Russian spacecraft while negotiating with SpaceX and Boeing.

Before the launch, Mr Musk called the “supersonic abort test” a “risky mission [that was] pushing the envelope in so many ways.” In a press conference afterwards he deemed it “a picture perfect mission”.

The demonstration sets up SpaceX for its next milestone mission: the first crewed flight of its Dragon spacecraft with astronauts Bob Behnken and Doug Hurley — possibly as early as March or April, SpaceX said. 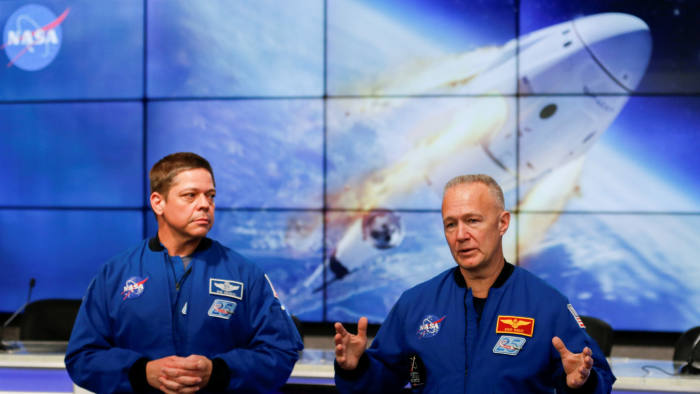 Before Sunday’s launch, the two astronauts described the deliberate failure as “the final exam” and the “culmination of a ton of work from everybody at Nasa and SpaceX”.

SpaceX was the first commercial company to launch an aircraft into orbit and visit the International Space Station, in 2012. It has since delivered satellites to orbit and couriered cargo to and from the space station under contract with Nasa but it has yet to send humans into space.

The ultimate stated goal of SpaceX, since it was founded by Mr Musk in 2002, is to make humankind an interplanetary species by making life on Mars on possible.

The successful test is another feather in the cap for Mr Musk, whose electric car company Tesla has been on a stock market tear. It is now worth $92bn.

The previously lossmaking car company made a surprise $143m net profit in the third quarter, propelling the stock to a 25.7 per cent gain for 2019. Analysts predict another profit of $92.1m when Tesla next reports fourth-quarter earnings on January 29, according to Refinitiv.