Fewer than one in four women of child-bearing age in Shanghai is willing to have a second baby, exposing another threat to a Chinese economy that is already growing at its slowest pace in 29 years.

On Friday, the National Bureau of Statistics announced that China’s economy in 2019 grew at its lowest rate since 1990 and that the country’s birth rate fell to a record low. While gross domestic product grew 6.1 per cent last year, China’s birth rate dropped to 1.05 per cent.

In Shanghai, one of China’s most important cities, the damaging effect of the one-child policy on the world’s second-largest economy is particularly acute.

Weng Wenlei, vice-president of the Shanghai Women’s Federation, a government body, said birth rates in Shanghai had plunged despite efforts to relax China’s population control. She said births in the city had fallen “swiftly” following a brief recovery in 2016, when China began allowing couples to have two children.

“This suggests [the two-child policy] has failed to serve its intended purpose,” said Ms Weng. “Consistently low birth rate will have a negative impact on Shanghai’s social and economic development.”

The challenge faced by Shanghai has spread throughout the country — and reflects a trend across the globe. According to the latest World Population Prospects from the UN, 27 countries have fewer people now than in 2010. The UN expects 55 nations, including China, to experience declines between now and 2050.

The demographic shift creates a timebomb for the Chinese economy as the world’s most populous nation faces a shortage of labour to power its assembly lines and care for the old.

“A large and young labour force is the main engine of economic growth,” said Yi Fuxian, a scientist at the University of Wisconsin, Madison. “That’s what China is starting to lose.” 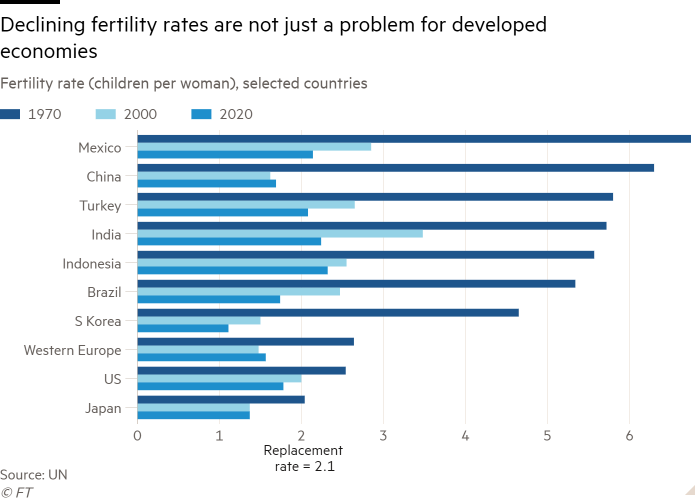 Chinese women gave birth to 14.7m babies last year, the lowest level in six decades, according to NBS. Yuan Xin, a demographer at Nankai University, warned that China’s population growth may turn negative as early as 2030 when the number of deaths exceeds newborns.

“This is an irreversible trend,” said Mr Yuan.

The drop in birth rates has taken a toll on labour supply, with employers ranging from factories to restaurants struggling with a chronic skills shortage, piling pressure on the slowing economy.

A survey of 353 companies in Sichuan, one of China’s most populous provinces, by the local statistical bureau in November found that 57.8 per cent of respondents had trouble filling positions in part owing to a decline in the working-age population.

“The problem may get worse in the years to come as fewer young people enter the labour market,” said a researcher at Sichuan Academy of Social Sciences.

China’s domestic consumption, a crucial driver of economic growth, has also fallen victim to the demographic challenge. Huang Wenzheng, a researcher at the Center for China and Globalization, a Beijing-based think-tank, said in an article last month that the economic slowdown was partly a result of the fall in child births since the 1990s.

I don’t want to risk my career to have a second child. I have worked so hard to get to where I am now

“[The] Chinese economy lost pace after consumption, led by a [shrinking] younger population, began to cool off,” said Mr Huang. Retail sales increased just 8 per cent last year, the lowest level since 1999, according to NBS.

To ease its population crisis, Beijing relaxed birth control and launched a campaign that included cash handouts to encourage couples to have a second baby.

The efforts, however, had a shortlived effect as China’s newborns rose 8 per cent year on year in 2016 before declining for three consecutive years.

The problem is exacerbated by the fall in the number of young women, a result of family planning that began in 1980 when baby boys were preferred to girls by many couples. China’s female population of child-bearing age, which officials say is from 20 to 39, fell 7 per cent over the five years ending in 2018.

“We are facing a shortage of would-be mothers,” said Mr Yuan of Nankai University.

Cost concerns have also played a role in discouraging more children. A study by the Shanghai Women’s Federation last year found that more than half of local families spent at least a third of their income on children.

Josephine Pan, a Shanghai-based data analyst, abandoned plans to have a second child after spending half of her family’s monthly salary of Rmb20,000 ($2,900) on her seven-year-old son. “It costs a fortune to raise a child,” said Ms Pan, 41, who after giving birth gave up her decade-long hobby of buying designer bags. “I couldn’t afford a second one.”

As in the west, a growing number of Chinese women are reluctant to have babies because they fear children would hurt their career. Chinese employers have a tradition of discriminating against pregnant workers as many female staff face demotion, if not unemployment, after returning from maternity leave.

“I don’t want to risk my career to have a second child,” said Lucy Zhang, a Beijing-based newspaper editor with a five-year-old daughter. “I have worked so hard to get to where I am now.”

Official surveys in Shanghai and Shanxi province last year showed that between 10 per cent and 25 per cent of local women were willing to have a second child.

Only 6.7 per cent of Shanghai women who were of child-bearing age and had a local residence permit, or hukou, gave birth to a second child in 2018. Shanghai hukou holders, which account for 60 per cent of the city’s population, are better educated and wealthier than immigrants from other parts of the country.

“Raising a child takes so much time and energy,” said Mary Xu, a Shanghai-based magazine editor who has a three-year-old daughter. “I have had enough.”