Recep Tayyip Erdogan has warned that Turkey will not hesitate to resume its military operation in north-east Syria if a five-day truce brokered with the US undermines its efforts to build a “safe zone” free of Kurdish militants.

Speaking a day after the US and Ankara agreed on the truce, the Turkish president said he hoped the US would “keep its promise”.

“But if the promise is not delivered, the minute that the 120 hours lapses, our operation will be resumed much more determinedly from the point where it was left off,” Mr Erdogan said on Friday.

Hours after the deal was supposed to be in effect, the Kurdish-dominated Syrian Democratic Forces accused Turkey of violating the agreement by shelling areas it controls near the border, killing five of its fighters.

Donald Trump, the US president, said he had spoken to Mr Erdogan on Friday, and was told there was “minor sniper and mortar fire that was quickly eliminated”.

Under the deal reached on Thursday, after Mr Erdogan held nearly five hours of talks with Mike Pence, US vice-president, Turkey agreed to “pause” its offensive for five days while Kurdish militants withdrew from the north-east Syria border region.

US secretary of defence Mark Esper said on Friday that he would travel to the Middle East over the weekend, his first visit to the region since taking office, but no further detail was given on his destination. He is expected to travel onwards to the Nato ministerial in Brussels at the end of next week.

Mr Esper said he had called Turkey’s defence minister and reiterated that Turkey must adhere to “the full terms of this agreement”, including ensuring “the safety and wellbeing of all people in the area controlled by Turkish forces”.

If the promise [of Kurdish withdrawal] is not delivered, the minute that the 120 hours lapses, our operation will be resumed much more determinedly from the point where it was left off 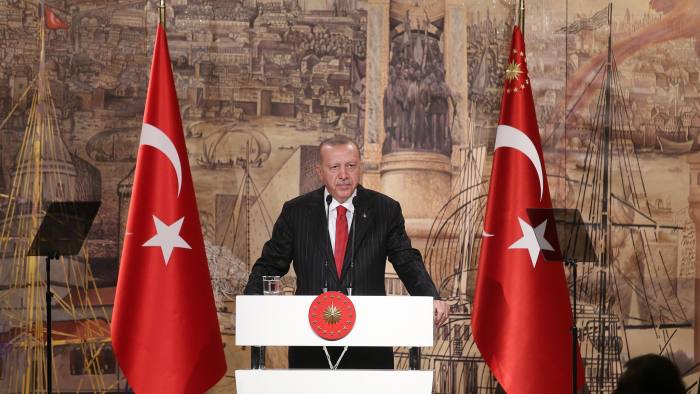 The Kurdish forces have been armed and trained by the US to fight Isis, but Ankara considers them terrorists and an extension of the Kurdistan Workers’ party (PKK) which has fought a more than three-decade insurgency against Turkey.

Mr Erdogan launched the offensive on October 9 after Mr Trump cleared the way by withdrawing US troops from the border region after a phone call between the two leaders.

The US president’s decision triggered a rare bipartisan backlash in Congress. Critics accused the White House of abandoning important allies in the Kurdish forces and said the move would embolden the Syrian regime and its main backers, Russia and Iran.

Mr Trump, who is withdrawing the 1,000 US soldiers from Syria, responded by threatening to “destroy” Turkey’s economy with sanctions and sent Mr Erdogan a letter telling him “don’t be a tough guy”. However, on Thursday, he described the ceasefire deal as a “great day for civilisation”.

But analysts say it handed Mr Erdogan an outcome that he has long pressed the US to agree to — the creation of the safe zone and the marginalisation of the US-backed SDF.

Under the deal, the US also said it would lift sanctions on Turkey.

“Turkey got what it wanted from the US,” said Emile Hokayem at the International Institute for Strategic Studies. “What happened yesterday was a farce, not real negotiation because the US is an exiting power. It was a de facto acceptance of the fait accompli and of the new balance of power in the northern Middle East.”

“It will leave the American people and homeland less safe, embolden our enemies and weaken important alliances,” Mr McConnell wrote in an editorial for the Washington Post.

A bipartisan group of US senators said they intended to push ahead with strong sanctions on Ankara, including measures such as blacklisting top Turkish officials, sanctioning the country’s defence industry and banning US citizens from buying Turkish sovereign debt.

Chris Van Hollen, a Democratic senator, said on Friday that he had recently spoken with Republican senator Lindsey Graham, co-sponsor of the bill proposing the sanctions, and the pair had agreed to proceed with their effort to pass the bill into law.

“Turkey is gloating about this so-called agreement. They’re saying they got everything they wanted and they thought it would be a much tougher negotiation,” said Mr Van Hollen.

Mr Graham said he had called General Mazloum Abdi, the SDF commander in Syria. “A buffer zone is acceptable to the Kurds but a military occupation that displaces hundreds of thousands is not a safe zone. It is ethnic cleansing,” he said.

“I hope we can find a win-win situation, but I share General Mazloum’s concerns. I also told him that Congress will stay very involved and is extremely sympathetic to the plight of the Kurds.”

Analysts say the main beneficiaries of the US withdrawal are Syrian president Bashar al-Assad and Russia, which intervened in Syria and shifted the balance of the country’s eight-year civil war in Damascus’s favour. As they were pushed into a corner, the Kurdish militants struck a deal with Damascus that meant Syrian government forces, supported by Russia, returned to the oil-rich north-east for the first time in years.

Mr Erdogan is due to meet Vladimir Putin, his Russian counterpart, in Sochi on Tuesday — the deadline for the Kurdish militants to withdraw from the border region — and the Turkish leader said the pair would discuss “what we will do in the safe zone”.

He added that it would not be a problem if Syrian forces took over areas previously controlled by the Kurdish militants, as long as the border was cleared of the Kurdish fighters.

The “safe zone” will stretch 440km along Turkey’s border from the Euphrates river to the Iraqi border, Mr Erdogan told reporters. Mr Pence said late on Thursday it would run 30km deep, but did not specify the total expanse. Some areas that Turkey wants to hold in the safe zone are now under Syrian, Russia and Kurdish control.

Donald Tusk, European Council president, criticised the US deal with Turkey. Washington’s accord with Ankara “is not a ceasefire. It’s a demand of capitulation of the Kurds,” he told reporters in Brussels.

Emmanuel Macron, France’s president, said in Brussels that Turkey’s offensive was “madness” and said it raised questions for Nato, of which Ankara is a member.

Mike Pompeo, the US secretary of state, will meet Nato secretary-general Jens Stoltenberg in Brussels late on Friday, following a meeting with Israeli prime minister Benjamin Netanyahu in Jerusalem to discuss north-east Syria.

Mr Erdogan on Friday said he wished to turn a “new page” in Ankara’s ties with Washington. But he slammed the letter Mr Trump sent him, saying it “did not conform with political and diplomatic etiquette”.

“Of course, I haven’t forgotten this,” Mr Erdogan said. “When the time comes, we will do what is necessary.”