Sitting at the European Council’s round table for the first and possibly last time on Thursday night, Boris Johnson’s message to fellow EU leaders was a straightforward one: it is time to move on.

The son of a former Eurocrat recalled his time at a school for the children of EU civil servants as he stressed his deep history with Brussels and emphasised that Britain would remain a close partner. But the UK, he insisted, simply didn’t fit in at the EU.

“People were impressed by the oratory,” says one EU diplomat. But the burning question in the minds of the other leaders, among them Angela Merkel of Germany and France’s Emmanuel Macron, was whether, having sealed an agreement for the UK to quit the EU after 46 years, Mr Johnson would be able to convince MPs to back it.

The prime minister is facing on Saturday a parliamentary battle that will define Britain’s fate for a generation. Allies admit the Brexit deal he secured at the European Council could be ripped up in the House of Commons less than 48 hours after it was agreed. “It’s going to be fucking close,” says an aide to the leader.

Mr Johnson has been working frantically to assemble a cross-party coalition to back the new Brexit deal: he needs 320 MPs to win. Theresa May, his predecessor, tried three times to pull off a similar feat and failed, on the last occasion by 58 votes. He needs to simultaneously win the backing of hardline Brexiters in his own party who want a clean break with the EU, and some Labour MPs who want to leave but still maintain European-style protections for workers. 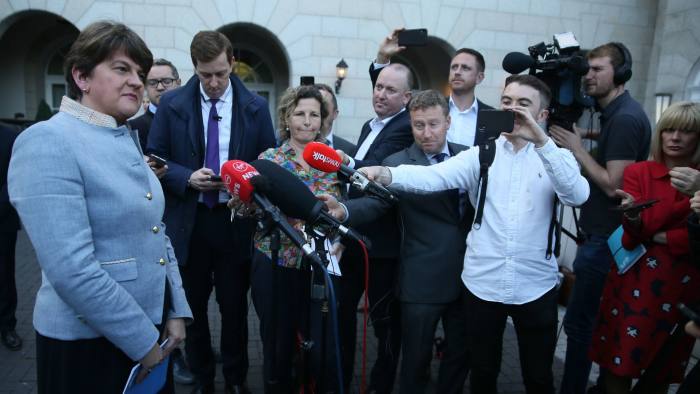 DUP leader Arlene Foster speaks to the media in Dublin. The Northern Irish party opposes Boris Johnson’s Brexit deal as it sees the pact as diluting the UK union © PA

A defeat would represent a stinging rebuke for the prime minister after the UK and EU pulled off what in many ways was an improbable last-minute deal finalised at Thursday’s EU summit.

If the deal passes, however, Mr Johnson will present himself as the prime minister who was able to “get Brexit done”, encouraging large numbers of disaffected Conservative voters to return to the fold from Nigel Farage’s Brexit party. Mr Johnson hopes to press home his advantage with an election within weeks: “An election is coming before the end of the year whatever happens,” says another ally.

Even the prospect of such a knife-edge vote seemed unlikely in the weeks leading up to the agreement, where the mood was largely one of gloom. Only nine days before the deal was reached, EU-UK relations were in crisis after Mr Johnson’s team leaked details of a phone call with Ms Merkel and accused her of making a deal “essentially impossible, not just now but ever”.

Instead, the UK and EU struck a pact that allowed both sides to claim their red lines had been met, while coming up with a solution for avoiding a hard border on the island of Ireland, the issue that has bedevilled Brexit.

The deal places a hard customs border between Northern Ireland and mainland Britain — stoking the ire of Arlene Foster, leader of the Democratic Unionist party, which props up Mr Johnson’s government — while ensuring that Northern Ireland’s Stormont assembly has a veto over the arrangements. Instead Mr Johnson acceded to a concept which Mrs May last year warned could “never be acceptable to any British prime
minister”.

The compromise is far removed from the Johnson government’s opening offer in its Brexit talks with Brussels, which kicked off in late August and for a long time made little headway.

During the early rounds of talks, EU officials complained that UK chief negotiator David Frost appeared to lack the wide-ranging negotiating mandate his predecessor, Olly Robbins, had enjoyed under Mrs May. One senior diplomat even labelled him at the time as a “postman” for Mr Johnson, relegated to delivering UK red lines. 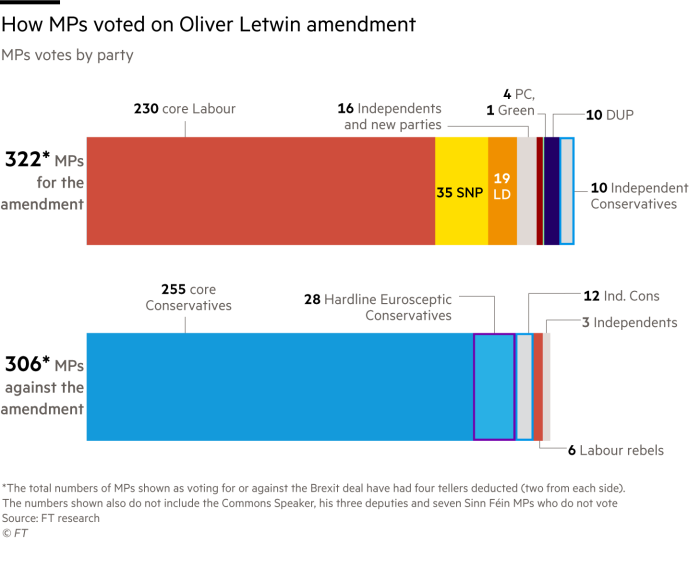 Meanwhile, Steve Barclay, the Brexit secretary, went on an autumn tour of European capitals that further dimmed the optimism of potential allies, as he spoke menacingly of the damage a no-deal Brexit would do to their economies. There was “a lot of disappointment with the tone”, says the diplomat.

Behind the scenes, however, two developments changed the European Commission’s calculations about the potential for a deal. First, Britain began inching in the direction that would ultimately see it accept a regulatory and customs border between Northern Ireland and mainland Britain — the key concession that unlocked the deal.

In early September, Mr Johnson had already mooted the idea that Northern Ireland and the Republic of Ireland could remain one single regulatory space when it came to food safety standards, meaning Brexit would put a border for sanitary and phytosanitary checks down the Irish Sea. 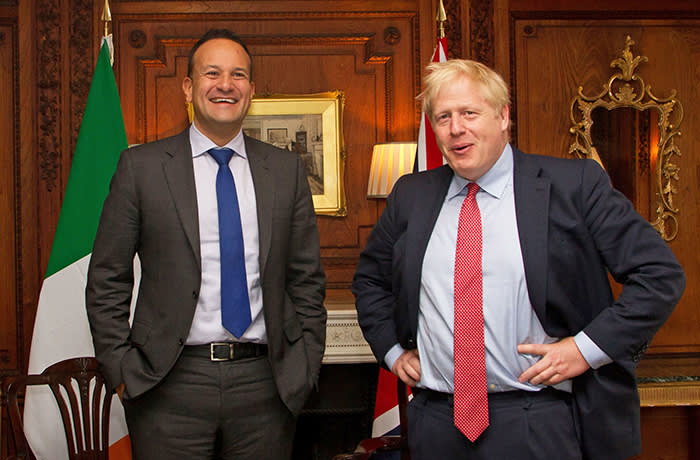 Leo Varadkar with Boris Johnson at Thornton Manor hotel. The end result  of the talks was that Mr Johnson agreed to erect a customs border in the Irish Sea

On October 2, Britain extended the offer to all goods, conceding that regulatory checks on whether UK products met EU single market standards would take place on entry into Northern Ireland. To EU negotiators, this was the equivalent of crossing the Rubicon, because it meant the UK was accepting a major divide between Great Britain and Northern Ireland.

The second factor was a sharp change in the UK political context, as Mr Johnson’s strategy of ruling out any Brexit delay and threatening Brussels with a no-deal exit dissolved. European diplomats point to the passage of the Benn Act, which compelled the prime minister to seek a Brexit delay if no deal was reached by October 19, as essential in building pressure on Mr Johnson.

The removal of the threat of a no-deal Brexit gave the EU confidence that it could play hardball and walk away from a bad UK offer. 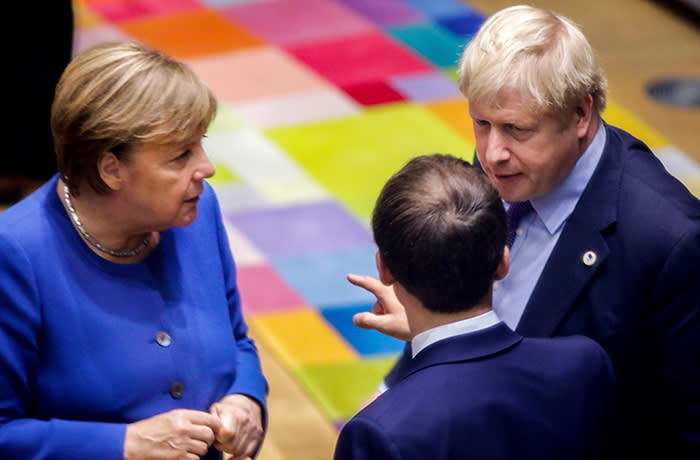 Angela Merkel and Emmanuel Macron speak with Boris Johnson, right, at the EU summit in Brussels. The German chancellor was said to be ‘particularly forensic’ in pressing the UK prime minister over his deal

All sides agree that the key breakthrough came on October 10, when Mr Johnson met Leo Varadkar, the Irish taoiseach, at the Thornton Manor hotel, a Victorian pile on the Wirral peninsula in north-west England.

The friendly talks at the supposedly neutral venue, popular with wedding parties, were far too convivial for the tastes of some Northern Ireland Unionists. The end result was that Mr Johnson agreed to erect a customs border in the Irish Sea. As soon as the UK made that step, recalls one diplomat, “we were willing to work something out”.

Mr Varadkar emerged to declare the talks to be “very positive, very promising”. He had good reason to be happy. Mr Johnson’s plan removed the threat of a customs border on the island of Ireland, helping to safeguard the peace process. Although Northern Ireland would remain legally part of the UK customs territory, trade within the UK would for the first time be subject to internal customs checks.

For his part, Mr Varadkar was now willing to discuss offering the Northern Irish assembly a democratic consent mechanism, a critical goal for a UK prime minister determined to dispel the notion of an unbreakable “backstop”.

The meeting also clarified that the negotiations were no longer really about a backstop at all. The deal that Mrs May had negotiated on the Irish border was billed as an insurance policy if no other solution could be found. Mr Johnson’s negotiation, however, was about a system that both sides understood would be in place for the long term.

Mr Varadkar’s reaction to the meeting made an immediate impression in Brussels, and the next day Michel Barnier, the EU’s chief Brexit negotiator, requested a mandate from national capitals to radically intensify negotiations. 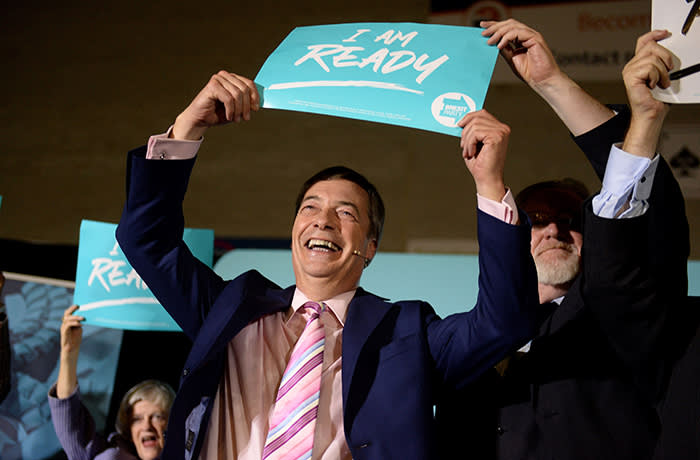 Nigel Farage’s Brexit party has attracted many disaffected Conservative voters, but they could return to the fold if Boris Johnson’s deal passes the Commons vote

The EU team was clear that the starting point for talks should be an EU proposal from February 2018 to keep Northern Ireland in the EU’s internal market and customs union. The weekend negotiations were difficult, with Mr Barnier telling diplomats that British plans for ensuring the right tariffs were paid on goods were baffling and risked leaving the EU market open to fraud.

As the UK moved closer to the EU’s demands, however, negotiators were able to begin a final sprint to resolve a series of issues, including the consent mechanism. Between 20 and 30 UK officials worked alongside EU counterparts on the fifth floor of the commission’s Berlaymont building in Brussels. The moves opened the possibility of a deal, but also broke the relationship between Mr Johnson and the DUP, which opposes any dilution of the union.

The DUP was still deeply anxious about customs arrangements that would create a rift in the union. But Mr Johnson, desperate to conclude a deal, decided on Thursday morning at 6.30am — just ahead of the Brussels summit — to go ahead without them.

The prime minister, fortified by a brunch of bacon and sausage rolls, headed for Brussels. At the summit that night, Ms Merkel was “particularly forensic” in pressing Mr Johnson on how he planned to succeed where Mrs May failed in getting his deal ratified, with the UK prime minister underlining his certainty that he can take Britain out, as planned, on October 31.

According to one diplomat, Ms Merkel warned Mr Johnson not to ratchet up the pressure on MPs by claiming the EU would refuse an extension if the vote fails. She was saying “Don’t put words in our mouths”, says the diplomat.

After Mr Johnson left the room, the other 27 leaders agreed that now was not the time to discuss how to handle any potential British request to delay Brexit further. But one may yet become necessary if the Commons arithmetic today fails to stack up for Mr Johnson.

Mark Rutte, the Dutch Prime minister, used a Brussels press briefing to urge MPs to back the deal, calling it a “beautiful compromise”. “We really made a square into a circle,” he said. “I would say to the British House of Commons, what more do you want?”