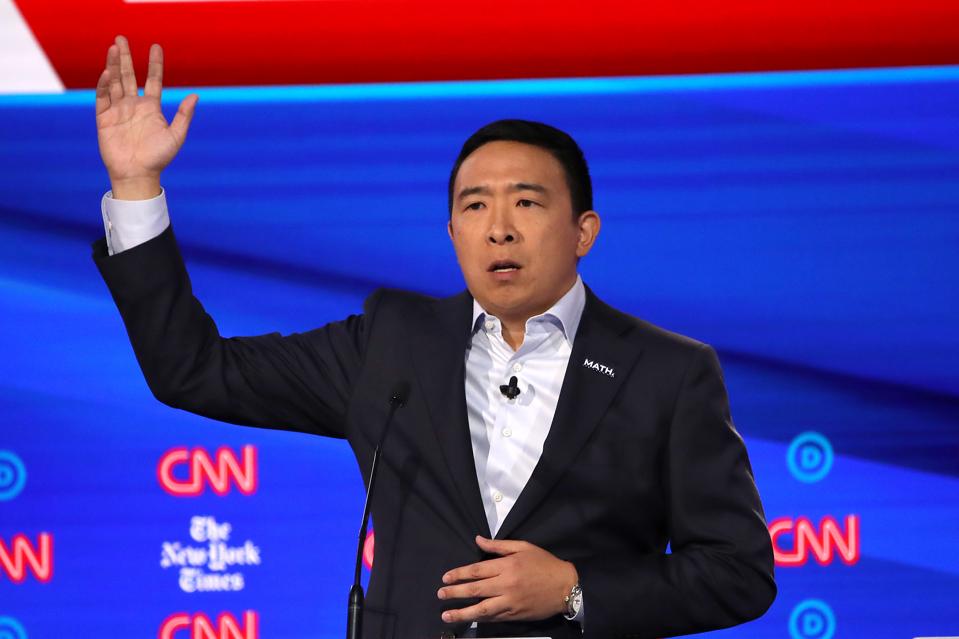 To close out Tuesday’s debate, CNN asked the twelve (12!) candidates on stage to respond to a question about friendship. Anderson Cooper spoke about how Ellen DeGeneres recently defended her friendship with George W. Bush and asked the candidates to speak about “a friendship that you’ve had that would surprise us and what impact it’s had on you and your beliefs.” If you go by the reaction on Twitter, this is absolutely outrageous and trivial, and CNN couldn’t have picked a worse question if they’d tried. But in reality, the question was an extremely clever test— and only two candidates understood that well enough to score well.

The Twitter backlash to the question was immediate and strong, with many people ‘raging at CNN’ over asking a question that many viewed as trivial. Many people, including candidates Julián Castro and Kamala Harris and former candidate Jay Inslee, were quick to point out that the question came at the end of a debate that did not feature a single question about climate change (or immigration, LGBT rights, China, etc.) But Twitter isn’t representative of the general public, and in my view, it’s an extremely important question. What it gets is what I would argue that this is an equal or perhaps even greater challenge to our next president than climate — the bipartisan divide in this country.

It’s also a clever question. It’s easy to offer platitudes about how our next president will need to “remind America that patriotism is love of country, and you cannot love your country unless you love your fellow countrymen and women”—which is true, and a quote from Senator Booker’s response, but not enough to answer the question. The Washington Post speculated that the ‘Ellen Question’ was an ‘unexpected personal question’ designed to throw candidates off and force them to speak off the cuff. This isn’t particularly fair, since higher-polling candidates had more time to think of their responses, and it definitely hurt Castro, the first candidate who had to respond.

Castro absolutely failed in this response. It’s not clear if Castro realized the question was about the bipartisan divide, or if he chose not to address it, but after offering a quick platitude about “people older than me that had a lot to teach me, or people who grew up very different from me. Also, teachers” he pivoted to a thinly veiled criticism of DeGeneres. He offered the same pushback that she received at the time—that “we can be kind to people and also hold them accountable for their actions.” It was a fair point, but it was a response to the framing of the question (did you hear about Ellen and Bush?), not to the question (tell us about your own friendships.)

It also didn’t answer the deeper part of this question—how will you heal this divided nation? Do you even want to? How have you demonstrated that commitment in your everyday life? Hey, you’re not just running to be the Democratic candidate. You’re running to be the President of the United States of America—all of America, whoever they voted for. Can you be a good President to everyone? What would that look like? Why are you the one who can bring this country together?

Even with three candidates speaking before him, giving him mental time to prepare a good answer, Tom Steyer still didn’t name a Republican. I’m not sure which is worse—that he couldn’t think of a single Republican he’s friends with, or that he didn’t understand the subtext of the question. Either way, he named South Carolina environmental justice advocate Deanna Berry, somehow deciding that an answer about a fellow activist on the same side of the political spectrum counts as ‘surprising’ because “She’s a different gender. She’s a different race. She’s from a different part of the country.” Either way, he quickly pivoted to his canned final statement.

Every Congressperson Except Warren: C

Of the ten candidates that I haven’t failed, eight are current or former members of Congress. Of those eight, seven chose, for their ‘friend’, a Republican member of Congress. To me, this wasn’t what we were looking for. Your fellow senators or representatives may be your friends—but they’re also your coworkers, people you have to have a congenial relationship with in order to do your job well.

This is also a bad answer because, Republican congresspeople aren’t representative of the average Republican. If the only Republicans you know are on Capitol Hill, you’ll end up with a very skewed view of what Republicans believe. I am more interested in how candidates interact and connect with the vast majority of Republicans, who are voters, not politicians.

Some of them did better or worse, though—here’s how it shook down.

Klobuchar, Biden, and Sanders are graded lower because all three chose to talk about the late Senator John McCain—which to me implies that they are not friends with any living Republicans.

At least the Republican Senators and Representatives these candidates mentioned are still alive. But these answers came across as stilted and generic. Harris does get bonus points for mentioning her South Asian heritage for the first time—I would guess that up until this point, the average voter knew Harris was mixed-race and knew she was black, but didn’t know that she is also Asian.

Beto had a great story about a road trip with a Republican—it came across more genuine than the other answers, but still missed the point. Also, that Republican, Will Hurd, has said he would still vote for Trump even if Beto were the nominee.

Warren made the right call in choosing not to talk about a Republican Senator. However, her alternatives weren’t much better. She talked about how two of her brothers are Republican—but being friends with a family member with different political views is quite a different dynamic than being friends. The most Republican friend she could come up with was a former colleague at Harvard—still a politician, still a coworker, but at least not a Republican senator. But although Fried identifies as a Republican and served under Reagan, he endorsed Barack Obama in 2008 and Hillary Clinton in 2016. If that’s Warren’s most Republican friend, that’s not a good sign.

I think in this situation it’s appropriate to mention Buttigieg’s military credentials, as they’re key to his response. The mayor had an excellent debate, and his closing remarks were no exception. His words about the friendships he made with those he was deployed with in Afghanistan were compelling, but raised questions for me. From what Buttigieg has said in the past, he was pretty reticent about his personal life while deployed (for example, many of the people he worked with didn’t even know he was a mayor). Although it’s great that his fellow servicemembers ‘didn’t care’ about his identity or beliefs or family background, they also didn’t know those things. It’s hard for me to imagine forming deep friendships while deployed without talking about your parents or life back home—then again, I have no idea what being deployed is like in general.

Still, Buttigieg’s response was also yet another answer about friendships with people you have to be close to in order to do your job well. But he was able to spin this as a positive, and a model for the future. He spoke compellingly, as he has before, about the strong bonds he formed while serving in Afghanistan, and how identity politics matter a lot less when you’re trusting one another with your lives and working together on something truly difficult. He explained that he wants to make it so “every American can have that experience, without having to go to war,” and mentioned his plan to increase opportunities for national service and work together on issues including climate and mental health. Buttigieg talks often about what he calls a ‘crisis of belonging,’ and is clearly as dedicated to ending it as he is the climate crisis, for example. He’s landed squarely in the lane that Cory Booker was expected to dominate—a unifier, someone new, someone who inspires hope.

This was a surprising one. When I heard the question, I knew Buttigieg would be able to answer it compellingly, both because it fits so well with his message and because he had such a good debate overall and has had many ‘breakout moments’ in past debates.

But Yang has been succeeding largely in spite of the debates, not because of them. But he absolutely knocked it out of the park on this one, with a vibrant story about a voter he met on the campaign trail, a “guy named Fred, who’s an avid Trump supporter, a trucker. He let me ride in his truck for hours. He spent some time in jail. I heard about his experiences trying to get other people off of drugs.” He then revealed that Fred is now supporting Yang in 2020.

It was the best answer of the night, because it was the most forward-looking answer of the night. Instead of talking about Washington insiders and a bygone era of a bipartisan Congress, or promising to hold people ‘accountable,’ Yang offered a diagnosis of our problem, and a path forward. He sounded confident. He sounded like he understood why people voted for Trump, like he sympathizes with them and recognizes that Trump broke his promises to them. Instead of focusing on how Republicans are wrong about why things aren’t great (it’s not immigration, ‘PC culture,’ bad trade deals), he focused on how they’re right that things aren’t great, and offered a path forward.