A decade ago, China launched a high-profile challenge to the dominance of the US dollar, projecting a greater role for the renminbi in the global financial system. But the would-be challenger is struggling.

The dollar is still used on one side of 88 per cent of all foreign exchange trades, according to the latest triennial survey by the Bank for International Settlements, while the renminbi’s share is just 4 per cent, with a rise in turnover “only slightly faster” than the overall market. The currency amounts for about 2 per cent of total foreign exchange reserves, according to the IMF.

In Hong Kong, renminbi deposits tracked by the Hong Kong Monetary Authority have dropped more than a third from their 2014 peak. And the value of offshore renminbi bonds was $53bn at the end of the first quarter of this year, down more than half from the 2015 peak, according to the Asia Securities Industry & Financial Markets Association.

Market participants say internationalising the renminbi would require Beijing to let the currency trade more flexibly and to open up the country’s capital account. “Right now it isn’t safe to do either,” said Brad Setser, an economist at the Council on Foreign Relations, a US think-tank.

Beijing still yearns for a financing system independent of the dollar, in part to reduce Washington’s reach into China’s business sector. A US appeals court ruling earlier this year offered a reminder of how far that reach extends: the decision raised the possibility that the Shanghai Pudong Development Bank, a lender with $900bn in assets, could be cut off from dollar-denominated funding for failing to provide records on a Hong Kong-based company allegedly used to evade US sanctions.

But progress is slow. At a conference in September, Chris Hall, the London-based head of trading at state lender China Construction Bank, said US-China trade tensions had put a dampener on the growth of offshore renminbi markets. There is a “tendency to take a step back and wait and see”, he said. 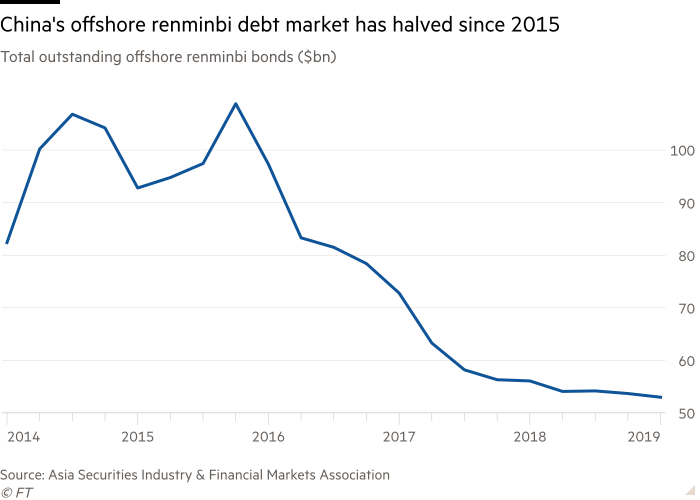 During the depths of the financial crisis, China had grand plans. Zhou Xiaochuan, then governor of the People’s Bank of China, called for sweeping reforms to the dollar-dominated international reserve system and a greater role for the renminbi. “The crisis and its spillover to the entire world reflect the inherent vulnerabilities and systemic risks in the existing international monetary system,” he warned.

Global use of the renminbi would reduce exchange rate risks for Chinese companies, and minimise exposure to sharp drops in dollar liquidity — one driver of the fall in Chinese exports during the financial crisis.

“There was both an objective to use renminbi internationalisation as a wedge to drive finance sector reform, but there was also a very strong and widely held view that having a more fully independent currency was really important to secure China’s economic sovereignty,” said Arthur Kroeber, managing director of research company Gavekal Dragonomics.

Mr Zhou’s initiative came at an awkward time. Despite having a large economy, China had neither deep financial markets facilitated by an open capital account nor widespread confidence in its currency — elements deemed “fundamental determinants” of international currency status by Harvard economist Jeffrey Frankel.

Yet the central bank pushed on, creating an offshore market for renminbi debt centred in Hong Kong. By 2014 annual offshore issuance had climbed to Rmb112bn ($16bn), according to Dealogic. The offshore exchange rate is independent from the controls used by the central bank on the onshore rate, which limits moves against the dollar to 2 per cent in either direction of a daily fix. 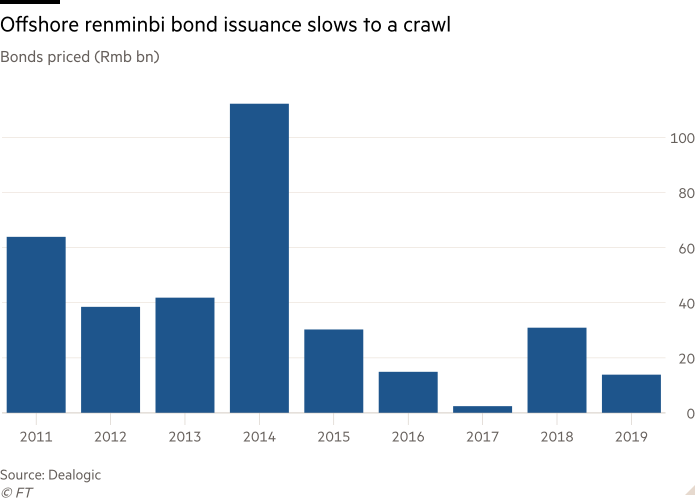 But in August of 2015, the central bank set the daily fix sharply weaker, inducing a shock devaluation in the normally stable onshore rate. Global markets convulsed and the offshore rate pushed below its onshore counterpart, spurring massive capital outflows on fears of a further sharp depreciation. Ultimately, Beijing tightened capital controls to stem renminbi outflows, which cut off liquidity to the offshore market.

Mr Kroeber contrasted this move to the US decision in the 1960s not to throttle the nascent eurodollar market when an offshore pool of dollar liquidity began ballooning in Europe. China’s decision stabilised the renminbi, he said, but left it bereft of credibility as an international financial currency. “Who’s going to issue or buy bonds in a market where liquidity can be turned off at the drop of a hat?” he asked.

Logan Wright, director of China research at Rhodium Group, said there was still a case for the renminbi’s rise in global reserves but, barring drastic changes to trade flows, not to the level of the dollar.

“It depends upon countries and millions of individual participants being willing to hold the currency and transact in it,” he said.