As Netflix and Amazon splurge on original content to win streaming supremacy in India, Bollywood producer Tanveer Bookwala has never been so busy.

This month he wrapped up filming Asur, a thriller for Voot, one of India’s biggest streaming platforms. Rasbhari, a coming-of-age story about a teacher, is set to be released on Amazon soon, and Fittrat, a series about a money-minded woman, premieres later this month on AltBalaji, another Indian platform.

“There is no time to breathe,” said Mr Bookwala, speaking from Mumbai.

“It’s been a mammoth explosion, content has become such a big market,” he added. “At the moment it’s a completely open playing field.”

It’s not just entertainment companies that are getting in on the new Indian streaming wars. From food delivery unicorn Zomato to Walmart-owned ecommerce firm Flipkart, a range of companies in the country are investing in streaming content to increase customer engagement and win subscribers as a new wave of cities comes online.

Streaming consumption exploded in 2016 when Indian billionaire Mukesh Ambani launched his Reliance Jio network, offering cheap data to millions. Overnight, Indians became some of the world’s most voracious consumers of digital entertainment. India has the world’s highest data usage per smartphone with an average of 9.8GB per month, Ericsson reported in June, predicting that number will almost double to 18GB by 2024, fuelled by video streaming.

Netflix and Amazon, both shut out of China, are pouring money into India. Since its entry in 2016, Netflix has invested more in India than any other market outside the United States, announcing 16 original series and 24 films, including the gangster saga Sacred Games. 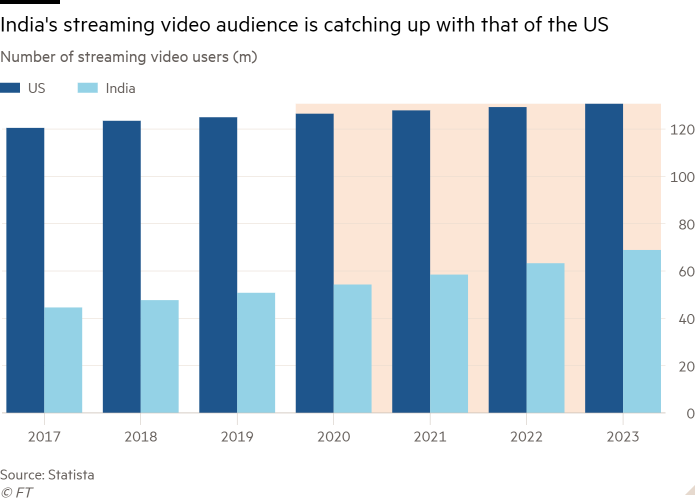 “India is the land of storytellers, a place where the greatest stories are born,” said Srishti Arya, Netflix India director for international original film. “It’s also one of the fastest-growing countries for broadband and fastest-growing economies. It’s a fantastic opportunity for Netflix.”

But Indian rivals are proving to be stiff competition. India’s most popular platform, Disney-owned Hotstar, boasts 300m monthly users and has scooped up Indian Premier League cricket streaming rights, a coup in cricket-mad India. To better compete with Hotstar, which offered a monthly subscription at Rps199 — about £2 — a month, Netflix launched a mobile-only plan in June for the same price.

Meanwhile, Indian mobile operators Jio, Airtel and Vodafone are bundling discounted or even free streaming subscriptions with phone plans to keep customers on their apps and introduce more people to premium content in the hope that they will eventually pay for quality.

To win over more Indians beyond the major cities, companies are looking for more movies and series in regional languages with relatable plots. “Everyone is [under] pressure to get the next 200m subscribers from India,” said Sidharth Jain, founder of Story Ink, a company that adapts books to screenplays. “The focus is very, very India — this year we need Indian content for Indians,” said Mr Jain.

But in this streaming mosh pit, no one is making big profits yet. “I don’t think anyone is breaking even, it’s completely crazy,” said Gaurav Jindal, entertainment analyst at the Boston Consulting Group. “It’s a content-library-building time. What the internet economy has taught us is to build a subscriber base, then monetise.”

Another reason for the surge in content comes from companies that have paying customers in India but want to keep them on their app with video content. Food delivery platform Zomato, which has 70m monthly users, launched a slate of original shows in September. Starry Meals with Janice, a social media star who goes to the kitchens of Bollywood stars, has been an initial hit. 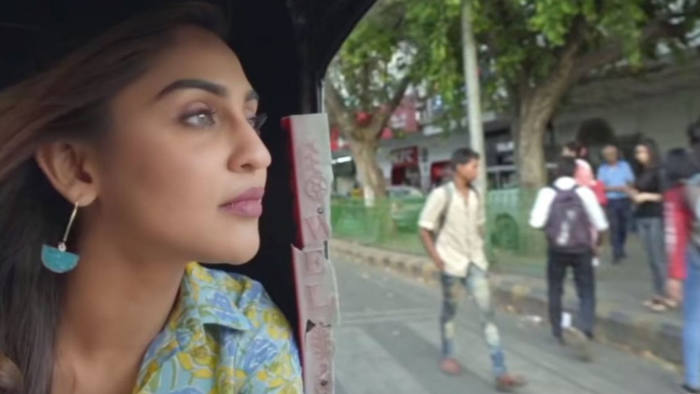 ‘Fittrat’, a series about a money-minded young woman, which premieres later this month on the Indian platform AltBalaji © Batson, Chris

“Video is definitely going to increase Zomato’s engagement,” said Durga Raghunath, Zomato senior vice-president of growth. “At this point it’s really about studying user behaviour and we’ve not yet decided on the way forward in terms of revenue. We’re trying to find our own model.”

To compete with Flipkart and Amazon, Indian mobile payments and ecommerce platform Paytm, which is backed by Alibaba, said it is also working on rolling out a streaming offering. “We intend to be an aggregator,” said Siddharth Pandey, vice-president of Paytm, who added he has been in talks with Netflix and AltBalaji to partner on the Paytm platform.

“We are speaking to almost all of them and figuring out the best possible way to get the content and monetise,” said Mr Pandey. “We will have this live very soon.”

The demand for new content unleashed Bollywood from the typical saas-bahu (mother and daughter-in-law) dramas and star-led epics on to grittier material, leading to an inevitable backlash in India, where film censors have traditionally suppressed “offensive” works.

Ramesh Solanki, a member of the Hindu nationalist organisation Shiv Sena, filed a complaint to police against Netflix for defaming Hindus in September, inspiring #BanNetflixIndia to trend on Twitter. “I subscribed to Netflix, I watched some episodes and I was unable to continue,” Mr Solanki said. “They were portraying Hindus in the wrong way.”

Yet with no imminent censorship ban on the horizon, a bigger source of uncertainty for platforms is if they will be subject to FDI restrictions, said Ashish Pherwani, media and entertainment sector leader of EY. “We’re waiting for clarity on what exactly that means,” he said.

In the meantime, producers such as Mr Bookwala are trying to make the most out of the content boom. “Who will stand tall? It’s hard to tell but good material will lead to more subscriptions,” he said. “We’re all in the race at this moment.”