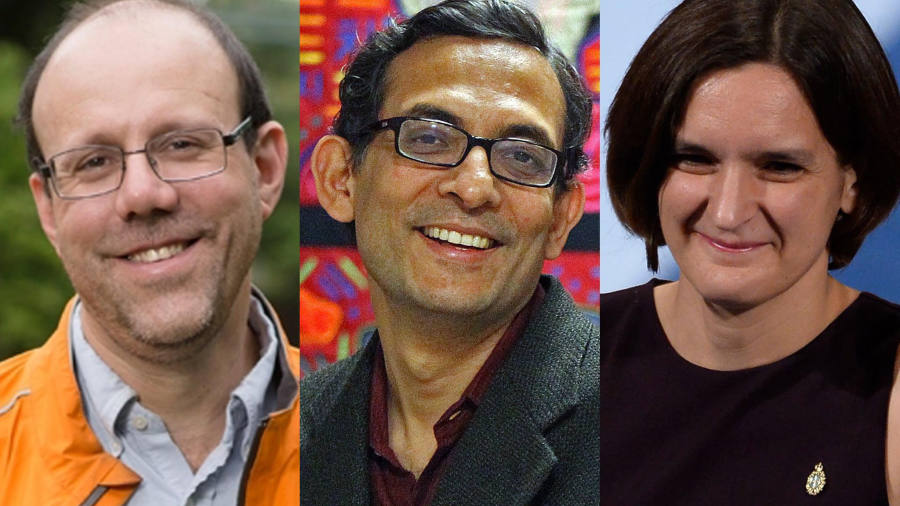 Abhijit Banerjee, Esther Duflo and Michael Kremer have been jointly awarded the Nobel Prize in economics for their experimental approach to alleviating global poverty.

Mr Banerjee and Ms Duflo — a couple both at work and in their private life — are professors at the Massachusetts Institute of Technology, while Mr Kremer is a professor at Harvard University.

Ms Duflo, 46, becomes only the second woman to be awarded an economics Nobel, after the US economist Elinor Ostrom who won the prize in 2009 for her work on human co-operation. She is also the youngest-ever laureate in economics: the previous record was held by Kenneth Arrow, who was 51 when he was awarded the prize in 1972.

The three, who often collaborate in their research, were awarded the prize — officially known as the Sveriges Riksbank Prize in memory of Alfred Nobel — for developing new, experimental research methods to identify the most effective policy interventions to fight poverty through field studies.

“Our goal is to make sure the fight against poverty is based on scientific evidence,” Ms Duflo told a press conference. “Often the poor get reduced to caricatures and even those [who] try to help them do not understand the deep roots of what is making them poor . . . We try to address problems as scientifically as possible.”

The Nobel committee said the trio’s approach had “completely reshaped” development economics, with a clear impact on poverty and great potential to further improve the lives of the worst-off around the world.

An example cited by the committee was their work on the “learning crisis”, which found that providing textbooks would not by itself help children learn more in school, without better and more tailored teaching.

Their approach mirrors those traditionally used in clinical trials for new drugs; but the Nobel committee noted that as well as testing whether a certain intervention worked, they also investigated why it worked, using contract theory and behavioural economics to understand the driving forces behind people’s decisions.

Ms Duflo said it was “incredibly humbling” to win the prize, especially as it was usually awarded to those with many more years of experience, but added that the decision to recognise the field of development economics reflected “the incredible collective work” of hundreds of researchers in a network working on global poverty.

Asked about how rare it was for the award to go to a woman, she said she hoped it would “inspire many, many other women to continue working and many other men to give them the respect they deserve”.