Turkish-backed Syrian rebels will press ahead with a plan to take a key town in northern Syria, Recep Tayyip Erdogan vowed on Monday, in a sign that a deal between Kurdish forces and Damascus may fail to halt the Turkish assault in the region.

The Turkish president said Ankara was in discussions with Moscow, the most important foreign backer of Syrian leader Bashar al-Assad, about the fate of the strategic Arab-majority town of Manbij. It needed to be “emptied” of the Kurdish “terrorist organisations” that control it, he said, adding: “The true owners, our Arab brothers . . . they will enter there.”

Mr Erdogan’s remarks came amid reports of Syrian forces mobilising close to Manbij as they headed north to the border frontline, underscoring the uncertain and fast-changing lines of control in north-east Syria after the Kurdish-dominated Syrian Democratic Forces (SDF) announced on Sunday that they had reached a military agreement with the Assad regime under Russian sponsorship.

Kamal Akif, spokesperson for the SDF foreign affairs department, confirmed that under the memorandum of understanding, the Syrian army and SDF “will be in any border region under threat, Russia will oversee the movements of the Syrian army, wherever they are needed”.

“Our priority now is to stop the Turkish attacks,” he added, referring to a Turkish assault that began last week. The operation, which Ankara says is aimed at establishing a 32km “safe zone” in a stretch of Syrian territory that adjoins the border with Turkey, triggered an international outcry and warnings that it could lead to a resurgence of Isis.

Ankara, which has faced mounting warnings of US sanctions over its incursion into Syria, argues that it is targeting Kurdish terrorist groups linked to a militia that has fought a 35-year insurgency inside Turkey. But scores of civilians have reportedly been killed in the assault, which has forced an estimated 200,000 people to flee.

Syrian regime forces moved quickly after striking the initial deal with Kurdish leaders, which appears to bring Mr Assad much closer to his aim of retaking “every inch” of the country as he strives to quash a crushing civil war now in its ninth year.

Syrian army units have entered at least three cities across the north-east, including Ain Issa where the SDF is headquartered, Syrian state media reported.

While analysts say Turkey would be keen to avoid direct clashes with the Syrian army, which is backed by Russia and Iran, they say Ankara is likely to want to consolidate its gains and push on in the Arab-majority areas that have been the main focus of its campaign.

By trying to solve its problem by military means, Turkey creates a new one and exacerbates the old ones

Clashes continued on Monday in and around the towns of Tal Abyad and Ras al-Ayn, where the first week of the Turkish ground offensive has been concentrated, according to the London-based monitoring group the Syrian Observatory for Human rights.

US troops, who guided and bolstered the SDF as they spearheaded the fight against Isis jihadis, have previously been stationed in Manbij, a frequently contested border city. It was unclear if they remained in the town after the Trump administration announced on Sunday that it would evacuate all 1,000 remaining American forces in Syria’s north.

Mark Esper, the US defence secretary, said that the Turkish invasion had dug deeper into north-east Syria than expected, putting American soldiers at risk.

Manbij, to the west of the Euphrates river, has long held symbolic significance for Mr Erdogan, who insists it “belongs to the Arabs”. The town has been under the control of Kurdish forces since 2016, when they pushed out the Isis jihadis who had seized it in 2014.

Haid Haid, a consulting research fellow at the Chatham House think-tank, said it was important to Turkey to push the militia “back across the river” to consolidate and extend its influence in Syria’s north-west. “The only area they [Kurdish forces] control beyond that line is Manbij, that’s why it’s become the central fixation, he said.

Murat Yesiltas, director of security studies at the Ankara-based think-tank Seta — which has close links to the Turkish government — said Turkey would be eager to see its proxies gain a foothold in Manbij before the Syrian army arrived in the region. “It’s first come, first served,” he said.

Mr Erdogan said on Monday that there were “a lot of rumours” about the agreement between Kurdish groups and Damascus, which came just four days after the launch of the Turkish assault.

He said Turkey was having “positive” discussions with Russia about the future of Kobani, a Kurdish-majority border town that is highly symbolic to Syria’s Kurdish population. “On Manbij we are at the stage of implementing our decision,” he added. 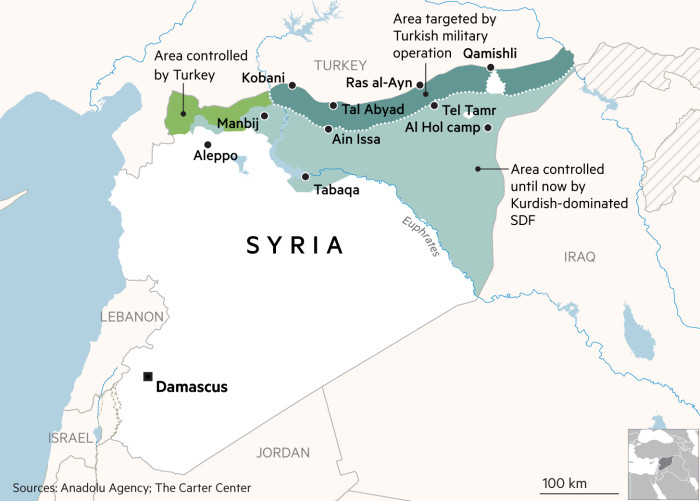 Discussions between Russian and Turkish political and military officials were “ongoing”, Russian president Vladimir Putin’s spokesman said on Monday. He declined to comment on the content of any conversations.

Yet Moscow, which helped broker the deal to move Syrian troops into the Kurdish-held areas, has steadily sharpened its rhetoric against the Turkish operation.

“By trying to solve its problem by military means, Turkey creates a new one and exacerbates the old ones,” Konstantin Kosachev, chairman of the foreign affairs committee in Russia’s upper house of parliament, said on Monday.

“Whatever the motives of the Turks, it is a clear fact that they invaded a neighbouring country, and this does not contribute to the solution of our common task: countering terrorism.”

On Monday EU foreign ministers meeting in Luxembourg urged member states to consider curbing arms exports to Turkey, in a move that highlighted the bloc’s limited leverage and reluctance to jeopardise Ankara’s co-operation with counter-terrorism and anti-migration efforts.

The ministers agreed to “commit to strong national positions” on weapons sales to Turkey, after several countries including Germany and France announced embargoes.

The 28 member states also agreed to take the next step towards targeted sanctions on Ankara over a separate long-running dispute concerning its offshore hydrocarbon exploration drilling in waters off Cyprus that Nicosia has already licensed to EU companies.

Federica Mogherini, the bloc’s foreign policy chief, said the action against Turkey would “not go unnoticed”, although she acknowledged the EU’s desire to avoid alienating Ankara.

“We have always tried to build constructive partnerships with Turkey,” she said. “It’s not the kind of relationship you can define as black or white.”