For nearly six months, Joe Biden has been the undisputed frontrunner in the race among Democrats to take on Donald Trump in next year’s presidential election. Not any more.

Elizabeth Warren, the senator from Massachusetts, is now neck and neck with the former vice-president in the average of national polls compiled by Real Clear Politics. The website also has Ms Warren leading the field in the crucial early voting state of Iowa.

Earlier this month, Ms Warren’s campaign announced it had raised $24.6m in the third quarter, nearly as much as the $25.3m raised by rival Bernie Sanders — who has said he will “change the nature” of his campaign after suffering a heart attack — and significantly more than the $15.2m brought in by Mr Biden.

At the same time, Ms Warren’s campaign events keep growing. Last month, she attracted her largest crowd, as about 20,000 people filled New York’s Washington Square Park to hear her speak. The senator stayed in the park for an extra four hours after the rally taking pictures with supporters.

Ms Warren’s support among the left-leaning Democratic “base” has grown steadily over the summer and into the autumn. But recent polls have indicated she is now also appealing to more moderate voters. The latest Morning Consult poll shows that Ms Warren is the “second choice” candidate for backers of Mr Biden, California senator Kamala Harris and South Bend, Indiana, mayor Pete Buttigieg. Ms Harris and Mr Buttigieg both enjoyed bursts of popularity but have fallen back to single-digits in most polls. 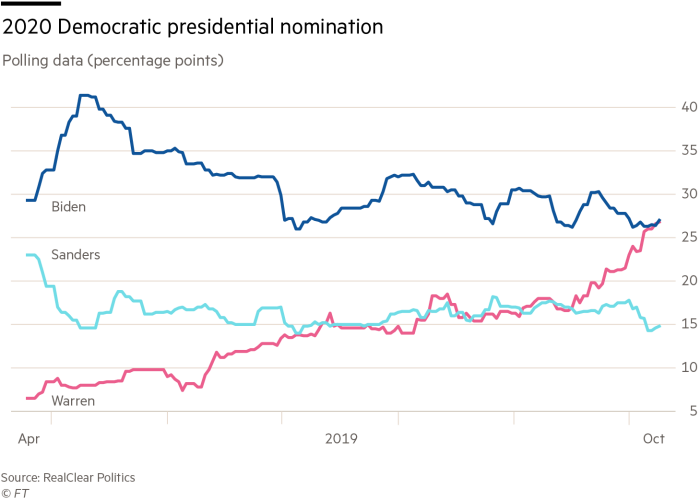 “Her rise has not been a boom, it’s been a build. It’s not been a surge, it’s been slow and steady,” said Jesse Ferguson, a Democratic strategist who was press secretary for Hillary Clinton’s 2016 presidential campaign. “She moved up in the polls because a growing number of people see her as an authentic candidate with plans.”

Mary Anne Marsh, a Boston-based Democratic strategist, said: “Elizabeth Warren is a very methodical, disciplined candidate who has been able to inspire people with her plans, her message and her life story.

“She talks to people in a way that everybody understands because she shared those problems too.”

Antonia Felix, who published a biography of Ms Warren last year, said that the Massachusetts senator told a compelling story. “She was not educated in the Ivy League, she is not a traditional East Coast liberal . . . she came up through the ranks on her own accomplishments.” 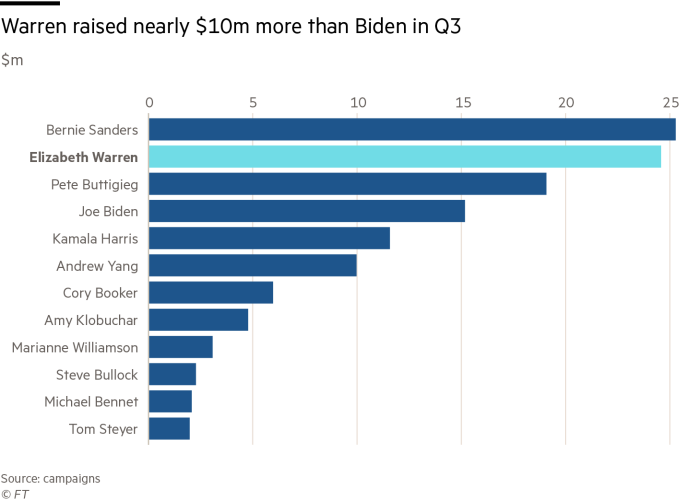 Ms Warren’s recounting of her unorthodox path from Oklahoma schoolgirl to 19-year-old college dropout to Harvard Law School professor has been a pillar of her stump speech.

But it has also opened her up to criticism. Last week, the conservative Washington Free Beacon website said there was no evidence to support Ms Warren’s claims that she was sacked as a public school teacher in the early 1970s for being pregnant.

The senator stood her ground, saying on Twitter: “This was 1971, years before Congress outlawed pregnancy discrimination — but we know it still happens in subtle and not-so-subtle ways,” she added. “We can fight back by telling our stories. I tell mine on the campaign trail, and I hope to hear yours.”

Ms Marsh said the accusations were unlikely to tarnish Ms Warren’s campaign. “There is not a woman who has not experienced that herself, or knows someone who has,” she said. 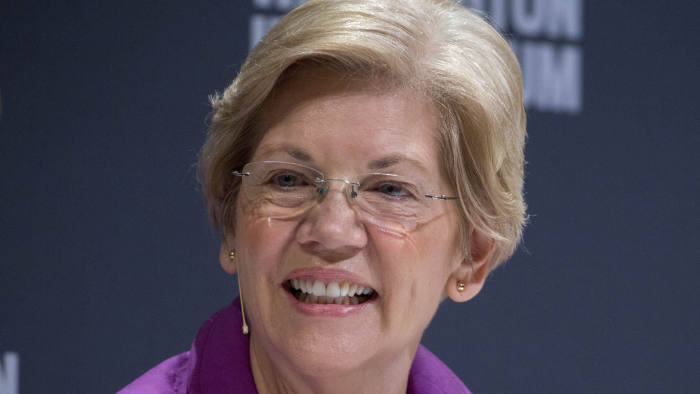 “You can see how viscerally women responded to it,” she added. “Women are not going to put up with the kind of coverage . . . the way that Hillary Clinton was treated . . . This election is too important, too serious and people are too worried about beating Donald Trump.”

Nevertheless, political analysts say Ms Warren will probably face further criticism not only from the media, but also from fellow candidates, if she continues to poll ahead of the pack.

Stephanie Cutter, a Democratic strategist who served as deputy campaign manager for Barack Obama’s 2012 bid, said: “If you are second or third in the race, you can escape with little scrutiny, but as soon as you are on top that scrutiny begins. We are on the cusp of seeing that happen now.”

Last week, Michael Bennet, the centrist senator from Colorado who has failed to find traction in the polls, said Ms Warren would open herself up to attack on her “Medicare for All” proposal in a general election if she was “not clear” about its estimated $31tn cost.

At a campaign stop in New Hampshire on Wednesday, Mr Biden made a dig at Ms Warren — whose campaign trail refrain is “I have a plan for that” — saying: “We are not electing a planner.”

Mr Trump has vowed to revive his jibes against the senator, who he calls “Pocahontas” because of her disputed claims to Native American ancestry, should she face him in next year’s general election.

But Ms Marsh said Ms Warren had already fought off such attacks, both in her initial Senate race in Massachusetts against Scott Brown, and more recently at the start of her primary campaign.

“Yes, she got off to a rough start in the beginning of her campaign because of it,” Ms Marsh said. “However, look how far she has come since then. The most dangerous candidate is somebody who goes into the barrel and comes out stronger — not weaker, stronger.”