The Ecuadorean government imposed a curfew in the capital Quito on Saturday after more than a week of violent anti-austerity protests in which five people have been killed and over 2,000 arrested or injured.

In a statement, the government told indigenous activists, who have poured into the capital to demand the reinstatement of fuel subsidies, that if they believed in peaceful dialogue they should get off the streets and leave the armed forces and police to round up troublemakers.

It gave people just 30 minutes to move indoors before imposing the curfew from 3pm (2000 GMT). “This measure is being taken so those who are disrupting order and peace in the Ecuadorean capital can be identified,” it said.

In a televised address, President Lenín Moreno said the armed forces would restore order across the Andean nation of 17m people. “We’re starting with the curfew in Quito,” he said.

This week’s protests have been the worst in Ecuador in years.

A backlash against the measure was initially led by taxi drivers but they reached a truce with the government. This week, indigenous activists took up the cause, leaving remote Andean villages to march on Quito, many of them dressed in ponchos and traditional dress. Some carried placards reading “IMF out of Ecuador”.

There have been serious, violent clashes in and around Quito every day this week. Masked youths and indigenous activists with sticks have fought running battles with police, who have responded with tear gas and water cannon.

Parts of Quito look like war zones, with burnt-out cars and barricades in the streets. As the curfew came into effect, shots could be heard in the downtown area and a large plume of grey smoke rose over the city.

Mr Moreno has refused to reconsider his plan, saying it is essential if Ecuador is to meet IMF targets of flipping its fiscal deficit into a surplus, cutting its debt and more than doubling its foreign reserves.

The IMF has backed Mr Moreno, who has accused his leftwing predecessor Rafael Correa of fuelling the violence with support from Venezuelan president Nicolás Maduro. “They are the ones who are behind this attempted coup d’état,” he said this week, without providing evidence. 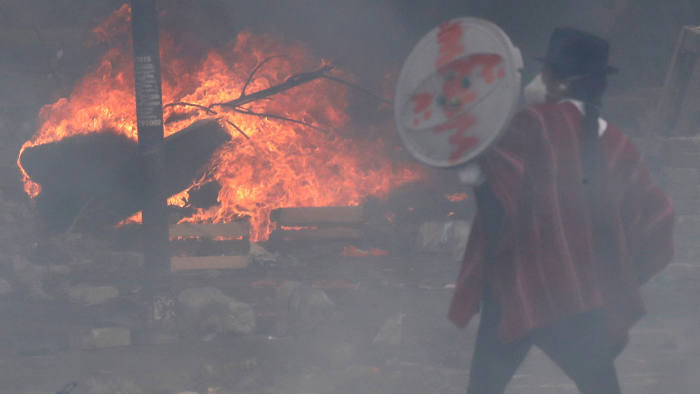 On Friday, US secretary of state Mike Pompeo said Washington also backed Mr Moreno and was “monitoring claims of external actor involvement in these demonstrations”.

The Ecuadorean president has said he is willing to negotiate with indigenous leaders and offer them measures to offset the higher cost of fuel.

In a letter to Mr Moreno on Friday, the powerful indigenous federation CONAIE said it was open to dialogue but only about the fuel subsidies. “We want to be clear that we will not negotiate any form of compensation,” it said, suggesting the protests are set to continue.

Indigenous protests are no small matter in Ecuador. Most of the country’s population trace their lineage to the pre-Columbian era and have waged successful campaigns to stop foreign multinationals exploiting mineral riches.

In 2000, CONAIE joined forces with the military to oust the president, triggering one of the most turbulent periods in Ecuadorean history. Five years later massive street protests forced another president to flee by helicopter.

The protests have hit oil production in a country which, while it accounts for around 0.5 per cent of global production, relies heavily on the industry. The energy ministry reported 877,000 barrels of lost output — almost two days-worth of national production — and said force majeure had been declared on some exports.