Boris Johnson has moved decisively to break the deadlock on Brexit, sparking a rare mood of optimism in Brussels, sending the pound soaring and prompting bookmakers to slash the odds on the UK leaving the EU with a deal.

Details of Mr Johnson’s plan are gradually taking shape, although EU ambassadors in Brussels were on Friday given only the contours of a possible agreement by Michel Barnier, the EU’s chief Brexit negotiator.

Those close to the Johnson plan say it adopts elements of a “customs partnership” proposed by Theresa May, the former UK prime minister, and derided by Tory Eurosceptics — including Mr Johnson — at the time. A heavy layer of fudge has also been added.

What finally unblocked the Brexit impasse?

Mr Barnier said that the UK prime minister made the key concession that there cannot be “border across the island of Ireland”, a move that finally persuaded the EU that a deal may be possible.

In doing so, Mr Johnson abandoned his previous proposal that there should be a customs border between Northern Ireland and the Republic of Ireland, managed by untested technology and other administrative fixes.

In exchange, the EU accepted Mr Johnson’s red line that Northern Ireland could not remain part of the bloc’s customs union and that the region must be able to benefit from any trade deals struck by the UK after Brexit.

Mr Johnson has not yet made formal proposals to the European Commission. One official said: “All we care about is: does it work? Does it allow for all the checks and controls necessary to protect the single market and customs union.”

How can Northern Ireland be part of the UK customs area without creating a border in Ireland?

Officials close to the negotiations say that while Mr Johnson is reviving Mrs May’s proposed customs partnership from last year he is scaling it back so it applies only to Northern Ireland. British officials are still working on the details.

Under the plan, Northern Ireland would remain legally part of the UK customs area but in practice would be part of the EU’s customs territory.

Goods entering Northern Ireland would pass a customs border in the Irish Sea, where EU tariffs would be levied and passed to Brussels.

In the event that the UK had lower tariffs than the EU, as a result of trade deals stuck by Britain with third countries, importers would have to apply for a rebate if they sold their goods in Northern Ireland.

What’s the problem with this plan?

Mrs May originally proposed this model — where the UK collects tariffs on the EU’s behalf — for goods entering any British port, including on the mainland as part of a long-term trading arrangement with Europe.

Mr Johnson said at the time it was “crazy” and Jacob Rees-Mogg, now Leader of the House of Commons, said: “It’s completely cretinous.” Mr Johnson’s plan applies the same principle, but is simpler as it would only apply to Northern Ireland. 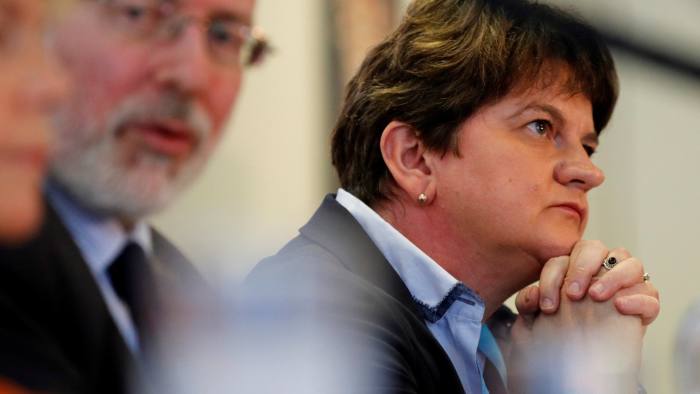 But it is more difficult for the Democratic Unionist party to swallow because it creates a new customs border in the Irish Sea with UK officials collecting tariffs for Brussels. It would mean paperwork for businesses in the region.

Jon Thompson, head of HMRC, said the scheme — had it applied to goods entering all UK ports — would have taken about five years to set up.

Are there any legal problems?

The plan would face legal problems in the UK, thanks to the efforts of hardline Tory Eurosceptics, including some now serving in the cabinet, to stop Northern Ireland being carved off into a separate customs territory.

One amendment to the 2018 Customs act, would make it unlawful for Northern Ireland to be part of a separate customs territory to Great Britain. Mr Johnson might argue that under his plan, the region remains legally part of the UK territory.

Another amendment moved by Priti Patel, now home secretary, would stop the UK collecting tariffs on behalf of the EU unless the EU agrees to collect them for the UK. That will not happen. Mr Johnson will have to change the law to make his plan work.

Does Northern Ireland have a say over this new plan?

Mr Johnson originally proposed last week that the Northern Ireland assembly — currently suspended — should vote on whether the region should stay part of the single market rule book and renew its consent every four years.

Mr Barnier told diplomats in Brussels that the prime minister had agreed to drop that proposal, which would have given the DUP an effective veto over any post-Brexit arrangement.

Different “consent” mechanisms are now being discussed to ensure the people of Northern Ireland approve. That could require the backing of both unionist or nationalist communities or perhaps just a simple majority, expressed through a referendum.

How does this proposal compare with Theresa May’s Irish backstop plan?

Mrs May’s plan had a “backstop” arrangement which would have seen the whole of the UK remain in a customs union with the EU — to avoid a border in Ireland — with only a thin regulatory border in the Irish Sea. The backstop was a temporary arrangement to designed to fall away once a longer term trade deal with the EU was agreed.

Mr Johnson’s idea would see a much thicker regulatory border and a new customs border in the Irish Sea, primarily to ensure that Mr Johnson and the DUP can honour their promise to keep Northern Ireland — legally at least — in the UK customs area.