Brussels will this weekend hold last-ditch Brexit negotiations with Boris Johnson’s team aimed at preventing the UK from crashing out of the EU after a breakthrough in talks between the two sides sparked hopes of a deal.

EU diplomats gave a green light to ramp up talks after Michel Barnier, the EU’s chief Brexit negotiator, told them that the UK prime minister had shifted his position sharply on a series of central demands by the EU.

Mr Barnier told EU27 diplomats that the UK accepted there could not be a “border across the island of Ireland”, in sharp contrast to Britain’s previous proposals that entailed a new customs border. He also said Mr Johnson had signalled a willingness to scrap a mooted veto for the Northern Irish Assembly on regulatory arrangements.

“Boris says he wants a deal and they believe him,” said an EU official. “Barnier has got them to accept certain EU red lines and that therefore solutions need to be worked around them.”

The pound rose as much as 2 per cent against the US dollar to break above $1.27 on Friday following the breakthrough, trading at its highest level under Mr Johnson’s premiership. It has increased more than 3.5 per cent over the past two days, its biggest two-day rise since the financial crisis. 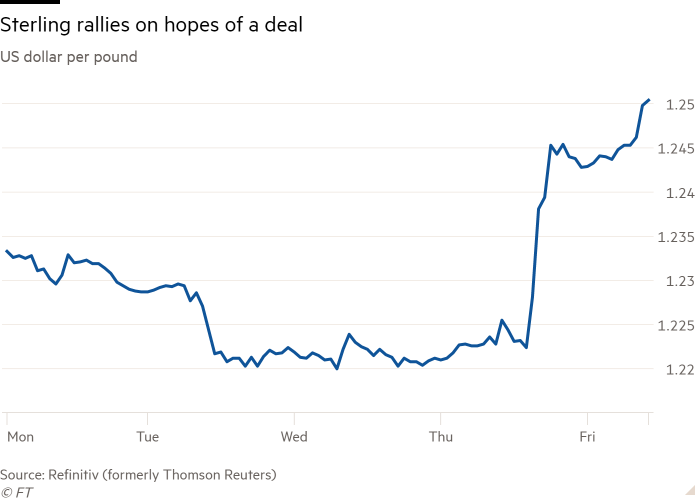 JPMorgan economist Malcolm Barr said: “For the first time, a UK exit from the EU on the basis of a withdrawal agreement within a matter of weeks now looks the single most likely path ahead.”

The European Commission said on Friday that “constructive” talks between Stephen Barclay, the UK’s Brexit secretary, and Mr Barnier had led to an agreement to “intensify discussions over the coming days”.

Diplomats said the two negotiating teams would know by early next week whether an agreement was possible, with Downing Street insisting it wanted to conclude a deal at the European Council meeting starting on Thursday.

If a deal were to be wrapped up by EU leaders in Brussels, Mr Johnson would then move quickly to try to win parliamentary approval at a special Commons sitting next Saturday, in what would be a moment of truth.

Officials close to the negotiations say Mr Johnson would keep Northern Ireland in the UK customs territory in legal terms, meaning it would benefit from any free trade deals struck with third countries, but in practical terms it would be part of the EU customs area.

Goods entering Northern Ireland would face customs and regulatory checks on the Irish Sea to allow them to move freely on to the Republic. British and EU officials would collect tariffs for the EU at ports in Northern Ireland and remit them to Brussels.

“It’s an elaborate flannel to demonstrate that NI has left the customs union while to all an intents and purposes remaining in it,” said one person briefed on the negotiations. Importers would have to claim a rebate where British tariffs were lower than those set by the EU. The Democratic Unionist party, which now faces the prospect of a customs and regulatory border between Northern Ireland and the rest of the UK, has so far reserved judgment. “There’s a hell of a long way to go,” admitted one ally of Mr Johnson. “But there is potentially a road through.”

Diplomats said the UK was now acknowledging that detailed customs proposals for Northern Ireland would need to be agreed up front by the two sides, rather than being thrashed out in future years, which had previously been the UK’s position.

There was also now a recognition on the British side that demands to deviate from EU standards in areas such as the environment and workers’ rights would reduce the scope of a future trade agreement, they said.

Speaking on Friday, Mr Johnson refused to engage on whether Northern Ireland would remain in the EU customs union after Brexit, but suggested his priority was to ensure that it could benefit from future trade deals. “I can tell you that under no circumstances will we see anything that damages the ability of the whole of the United Kingdom to take full advantage of Brexit and that is what people would expect,” he said.

“There is a joint feeling that there is a way forward that we can see a pathway to a deal,” he added. “That doesn’t mean it’s a done deal. There’s work to be done.”