Lev Parnas and Igor Fruman, who assisted Donald Trump’s personal lawyer as he sought to dig up dirt in Ukraine on Mr Biden, the former US vice-president and 2020 Democratic presidential candidate, were arrested on Wednesday evening at Dulles airport near Washington as they were about to board an international flight with one-way tickets, according to US prosecutors in Manhattan.

The Soviet-born pair, along with two others, were charged in a four-count indictment with conspiring to “funnel foreign money to candidates” in the US to “buy potential influence”.

The indictment alleged that last year the pair made an illegal donation to an unnamed congressman whose help they sought in ousting Marie Yovanovitch, then US ambassador to Ukraine. Mr Trump’s decision to recall Ms Yovanovitch in May of this year is a key question in the continuing Democratic impeachment inquiry. 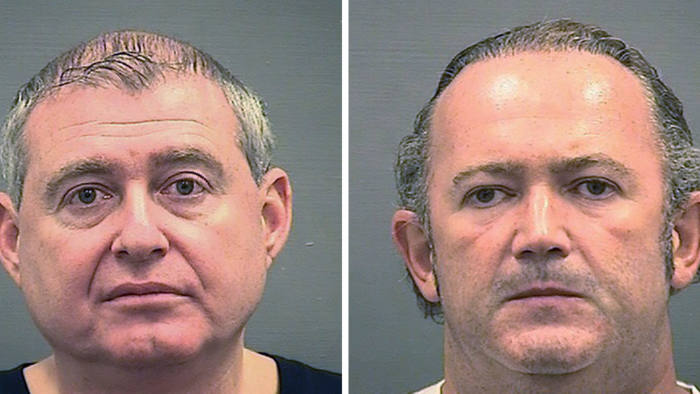 The arrest of Mr Parnas and Mr Fruman heightened congressional attention on their relationship with Mr Giuliani, the former New York City mayor who prospected for business as a consultant in Ukraine before taking on a leading role in Mr Trump’s inner circle as the president’s personal lawyer.

Mr Giuliani could not be reached immediately for comment.

The men appeared in court on Thursday afternoon in Virginia, dressed casually in trainers and loose T-shirts. They were represented by two lawyers who had defended Paul Manafort, the former Trump campaign manager whose activities in Ukraine landed him a seven-and-a-half year jail sentence.

Kevin Downing and Thomas Zehnle, the lawyers, said they were there to assist only with the initial appearance while Mr Parnas and Mr Fruman found lawyers to permanently represent them.

The pair were granted bail on a $1m bond each but were ordered detained at their homes with GPS monitoring. They did not enter a plea and are due back in court in New York next week.

“The American people expect an election process that hasn’t been corrupted by the influence of foreign interests, and the public has the right to know the true source of campaign contributions,” said William Sweeney, FBI assistant director.

Federal Election Commission records show that Mr Parnas and Mr Fruman have made a series of donations to Republican politicians and pro-Trump groups.

John Dowd, an attorney representing Mr Parnas and Mr Fruman before Congress, said in a letter last week that the pair “assisted Mr Giuliani in connection with his representation of President Trump”.

“Mr Parnas and Mr Fruman have also been represented by Mr Giuliani in connection with their personal and business affairs,” Mr Dowd added in the letter to Congress, arguing that the information Democrats were seeking was covered by attorney-client privilege.

House Democrats issued subpoenas to Mr Parnas and Mr Fruman on Thursday shortly after news of their arrest emerged. They also subpoenaed Rick Perry, the energy secretary, demanding information on his reported efforts to force board changes at Naftogaz, Ukraine’s state-owned energy company.

Mr Perry has denied the claims. The Associated Press last week reported that Mr Parnas and Mr Fruman were also pushing for changes at Naftogaz.

Both Mr Parnas and Mr Fruman are US citizens, though Mr Parnas was born in Ukraine and Mr Fruman in Belarus. Last year, the Campaign Legal Center accused them of violating campaign finance laws by anonymously funnelling donations through a shell corporation.

The pair were indicted alongside David Correia, a Florida businessman who has collaborated with Mr Parnas on commodities trading and other ventures, and Andrey Kukushkin, a businessman and US citizen who was born in Ukraine. Mr Correia remains at large. Mr Kukushkin has been arrested in California, officials said.

In addition to the campaign against Ms Yovanovitch, the indictment also alleges a scheme, on behalf of a foreign businessman with Russian ties, to try to snag a licence to operate in the burgeoning US legal marijuana business.

Until their entanglements with the mounting Trump-Ukraine controversy, Mr Parnas and Mr Fruman were little-known figures with patchy business records operating in immigrant communities in south Florida and New York. In 2015, Mr Parnas was found by a federal judge to have reneged on a $350,000 loan from one of his and Mr Correia’s investment clients to support a purported film project involving actor Jack Nicholson. The loan was never repaid.

The two men burst on to the political scene early last year, making big donations and soon gaining access to Mr Trump at his Florida club, Mar-a-Lago, and rubbing shoulders with Mr Giuliani.

Their first sizeable donation came in May 2018, according to the indictment, when they contributed $325,000 to an election fund supporting candidates aligned with Mr Trump. That and other contributions were channelled through Global Energy Producers, a natural gas trading business that prosecutors allege was created for the sole purpose of masking campaign contributions.

The Campaign Legal Center complaint features a picture of a grinning Mr Parnas beside Mr Trump at the White House in May 2018. It also detailed contributions to Pete Sessions, a longtime Republican congressman from Texas who lost his seat last year, and Ron DeSantis, governor of Florida.

According to the indictment, as their activities were attracting more attention, a person working with Mr Parnas remarked: “This is what happens when you become visible . . . the buzzards descend.”

“That’s why we need to stay under the radar,” Mr Parnas replied.

Mr Sessions said in a statement he had complained about Ms Yovanovitch, the US ambassador to Ukraine dismissed by Mr Trump, in a letter to Mike Pompeo, the US secretary of state, but insisted it was entirely separate to his interactions with Mr Parnas and Mr Fruman.

“I have been friends with Rudy Giuliani for more than 30 years. I do not know what his business or legal activities in Ukraine have been,” Mr Sessions added.

In May, Mr Giuliani described the men in a tweet as “my clients” without providing further details. They appeared to serve as intermediaries between Mr Giuliani and Rabbi Moshe Azman, the politically influential Kiev rabbi who has become a staunch Trump supporter.

Mr Azman launched a charity, Friends of Anatevka, to create a settlement for Jews forced to flee eastern Ukraine, where government forces are fighting Russia-backed separatists. Mr Fruman and Mr Parnas are members of its US board.

They accompanied Mr Giuliani last year during a meeting with Mr Azman in Paris, where he presented the former mayor with a commemorative key to Anatevka. A picture from that visit shows Mr Giuliani and Mr Azman sitting outside, smoking cigars. A Fox News tote bag sits on the table before them.

“I have a very good relationship with Giuliani and President Trump,” Mr Azman told a Ukrainian media outlet in August. “There were no presidents who helped and loved Israel as Donald Trump does. I pray for him every Saturday.”