A deadly lung illness linked to vaping has taken the lives of more than two dozen people across 21 states as U.S. health officials struggle to identify a precise cause of the outbreak, the Centers for Disease Control and Prevention said Thursday.

The number of fatalities jumped from 18 last week to 26 with 219 new cases diagnosed over the last week, the CDC said, using data complied through Tuesday. The agency said the total number of probable cases is now 1,299. Patients have been found in 49 states, up from 48 last week, as well as Washington, D.C. and the Virgin Islands, according to the CDC.

Health officials still don’t know what is making people sick. Of the cases where doctors know what patients were using, roughly 76% of them said they vaped THC, the active ingredient in marijuana, while 13% said they exclusively used nicotine, according to the CDC.

The illness impacts mostly men, and 80% of patients are under the age of 35, the CDC said. The median age of patients who have died is 49, ranging from 17 to 75 years old.

“We haven’t seen a measurable drop in the occurrences of new cases,” she said at the time. “The data that we’ve seen doesn’t suggest it has peaked, it doesn’t suggest this is declining.” 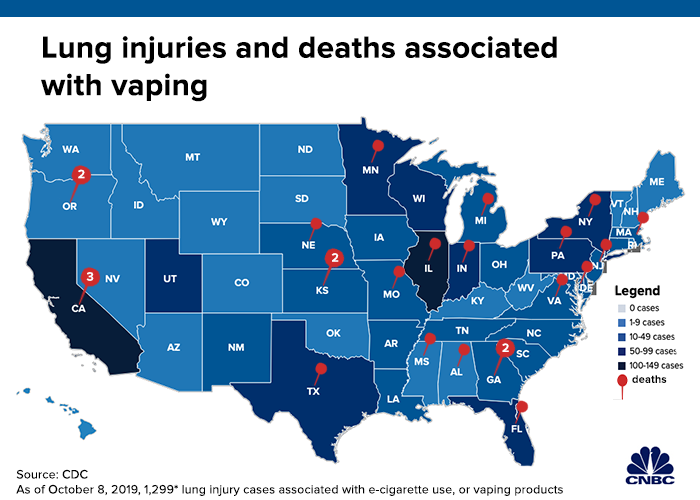 The CDC has dispatched more than 100 physicians and investigators since the lung disease started to emerge as a public health threat in July. Doctors initially said the illness resembled a rare form of pneumonia, caused by oil in the lungs, but new research casts doubt on that theory.

Researchers at the Mayo Clinic published a study Oct. 2 that said a mix of “toxic chemical fumes,” not oils, may be what’s making patients sick. They examined lung biopsies from 17 patients suspected of having the mysterious illness.

E-cigarettes are generally thought to be less harmful than traditional cigarettes. However, public health officials say the long-term health risks are unknown.

The CDC is recommending that consumers stop vaping, particularly THC and especially anything bought off the street.