This article is part of an FT series examining the risks and trade-offs companies face when they try to define a broader purpose for their business.

The smoke is imperceptible at first. Soon, though, a wisp points the eye to where a laser is etching faded creases on to the pristine pair of jeans in front of it. Just as the pattern seems complete comes the coup de théâtre: flames flash across the knees, creating rips in the denim that conform precisely to the design on a nearby computer.

The show at Levi Strauss’s innovation lab in San Francisco lasts just 90 seconds, but offers an insight into a company focused on the long term. Before it devised the laser process, workers had to scrub jeans with sandpaper for 20 minutes before finishing them with thousands of chemical brews to achieve the same distressed look.

Investing in the laser process, which has helped Levi cut out most of those chemicals, stemmed from an effort to enhance a reputation for social responsibility that dates back to the 19th century. The ambition has acquired new resonance as companies search for a future in which society holds them and the capitalist system they represent in higher regard.

The man from whom Levi Strauss takes its name was a gold rush-era merchant who, having commercialised a fellow immigrant’s idea for riveted denim overalls, gave away much of his fortune to fund local orphanages and university scholarships. His heirs burnished the reputation of Levi’s for paternalism, continuing to pay workers after the 1906 San Francisco earthquake destroyed the company’s factory, offering generous severance packages as America’s garment industry moved overseas and speaking of the company as on a mission of “profits through principles”. 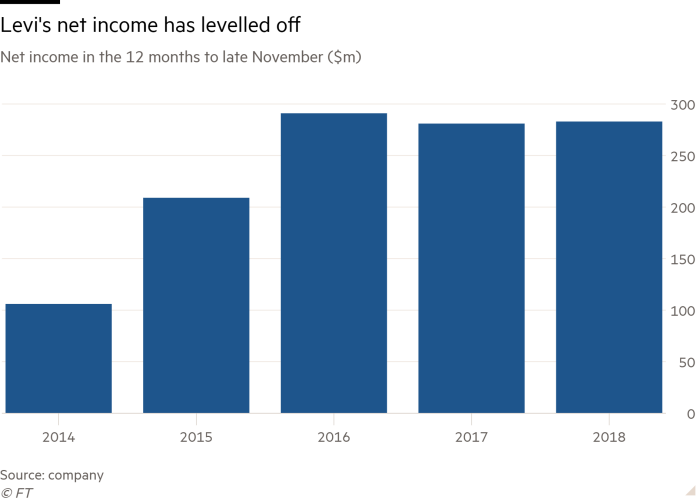 Such language has become more commonplace in corporate America in recent years since its largest investors began asking boards to explain what social purpose their companies serve and Washington’s Business Roundtable group adopted a stakeholder-friendly creed that challenged Milton Friedman’s notion that directors’ only social responsibility was the legal pursuit of profit.

But Levi’s offers an unusual example of a company that has grappled for generations with a related challenge consuming its peers: how to stay focused on long-term value creation, even in the face of the fashion industry’s short-term pressures.

For most of the company’s history, the answer was family ownership, but in 1971 the need for capital and a desire to offer shares to employees persuaded the controlling Haas family to float a minority stake on the New York Stock Exchange.

Just 14 years later, though, the family bought other investors out, explaining that being private again “would allow management to focus its attention on the long term rather than being concerned with the short term as a public company must be”.

The view that public markets are too trigger-happy has only gained in currency since then, with Warren Buffett among those warning that investors’ desire for quarterly earnings guidance has led to an unhealthy obsession with short-term profits at the expense of sustainable growth. 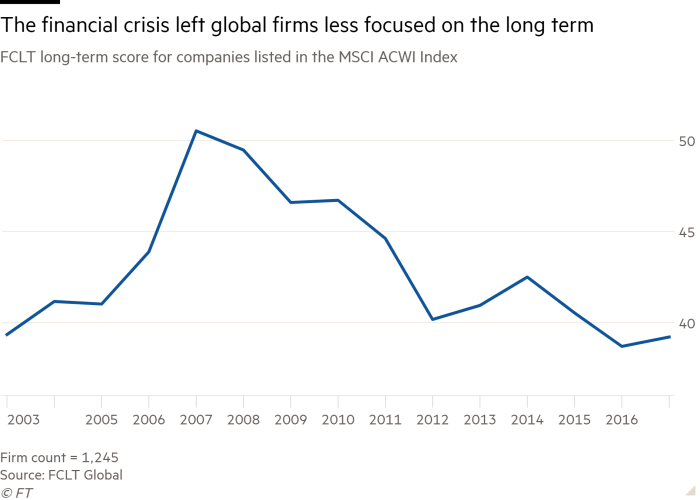 Yet, earlier this year, Levi’s decided to go back to Wall Street, offering a test case of whether other investors will share its founding family’s focus on a horizon that stretches far beyond the next quarter.

With more than 100 family shareholders, some wanting to cash out, there was “a certain amount of inevitability” to a listing, said Chip Bergh, who is only the third chief executive Levi’s has had from outside the family. If Levi’s had stayed private as the family tree grew more branches, “you [would] get to a point where you’ve got 250 shareholders and nobody holds more than 2 per cent. And how do you govern a company like that? It’s impossible.”

To address concern in the company that its principles would be compromised by the public market’s demands, the board first ensured that the family’s shares would have 10 times the voting rights of other investors. Dual-class shares have come under fire from Snap to WeWork, and the Council of Institutional Investors critiqued Levi’s arrangement as “severely” limiting accountability. But Mr Bergh defended it as giving the board “air cover” to manage for the long term. 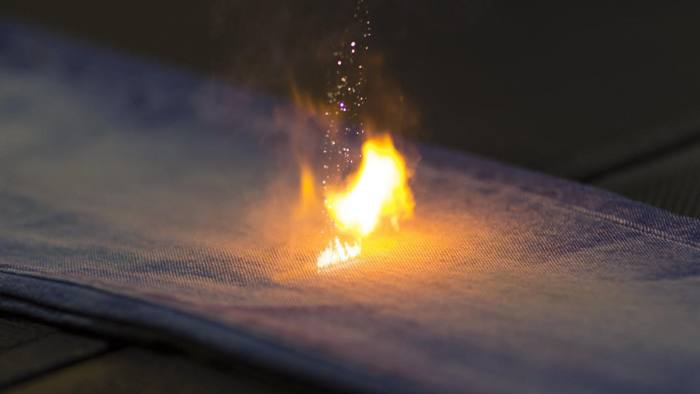 Second, Levi’s made an unusual pitch to investors, telling them that it would manage its business for the long term and not provide quarterly earnings forecasts. Shareholders after a quick win need not apply.

The offer was nonetheless oversubscribed, and denim-bedecked NYSE traders marked the shares up 30 per cent from the $17 listing price on day one. They have since swung between a high of $23.97 and a low of just over $16 as markets reacted to escalating trade wars and upheavals in US malls, but Mr Bergh maintained that most of his new investors planned to stick around.

“I think what [the IPO’s reception] said is investors have an appetite for companies that have a strong moral purpose and . . . are committed to running the business for the long-term,” he said. 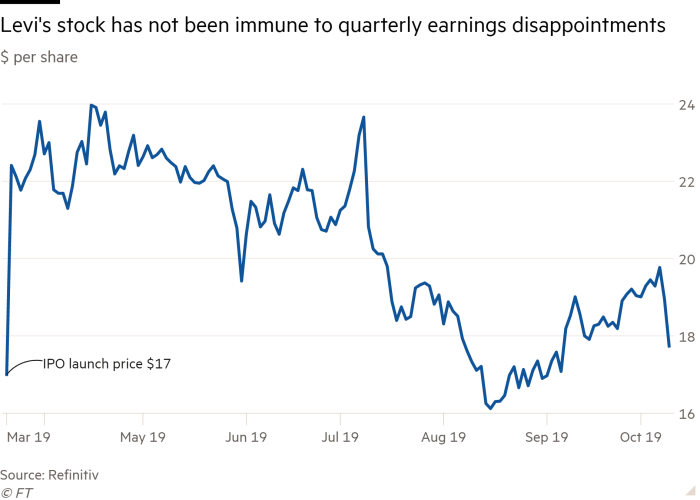 According to a recent study by FCLTGlobal, a non-profit dedicated to encouraging long-term capitalism, companies that invest more than average, avoid excessive distributions to shareholders and steer clear of scandals perform best over the long run. A McKinsey Global Institute analysis similarly found that companies with a long-term view generate higher profits and shareholder returns.

Levi’s scores well on both studies’ metrics, but Mr Bergh is adamant that he is not just ticking boxes. When he became chief in 2011 after 28 years at Procter & Gamble, he recalled: “I wanted Levi Strauss and Company to be and be seen as the world’s best apparel company, and among the best companies in any industry. That was the noble cause.”

But Levi’s had lost the lustre it enjoyed in the 1980s when Mr Bergh had a pair of 501s swiped from a youth hostel. By 1999, having seen competitors erode its market lead, Fortune dubbed the company a “failed utopian management experiment”. 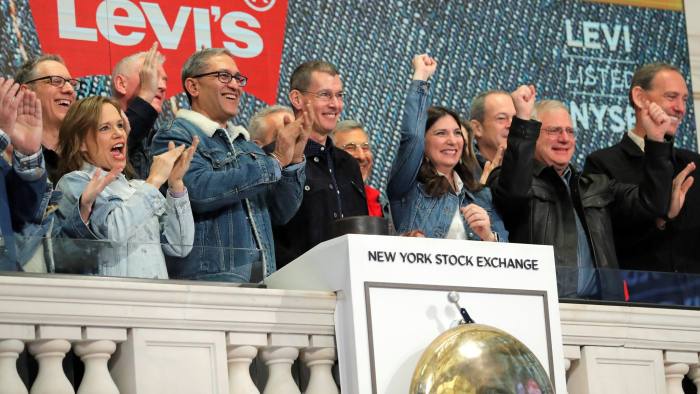 Mr Bergh realised that day-to-day discipline had to accompany the company’s focus on the long term, telling his team from the start that “profits through principles doesn’t mean we’re a non-profit organisation”. Its annual net income has more than doubled on his watch, from $135m to $285m.

That performance has provided the platform from which it could clean up its supply chain, improve conditions in third-party factories and advocate causes ranging from refugees to gun control. “The more profits we earn, the more we can reinvest . . . in the things that will make the biggest difference from a social and economic benefit standpoint in the places where we do business,” said Mr Bergh.

Some of that reinvestment is in the form of philanthropy: in a typical year the board allocates about 2 per cent of earnings before interest and tax to the Levi Strauss Foundation.

Most of the company’s broader efforts revolve around its global supply chain, however, and the reputational damage apparel companies have faced in recent decades from the offshoring of US jobs and revelations about inhumane conditions in far-flung factories suggests defensive motivations accompany its social conscience.

The Company of the Future

Levi’s introduced Terms of Engagement, a pioneering code of conduct for suppliers, in 1991 and has added requirements since then to improve workers’ health, financial literacy and opportunities. In this, as in its support for sustainable cotton farming or its development of technology to cut water use in its manufacturing by almost 90 per cent, it has worked with NGOs and shared its insights with rivals for free.

Such efforts have not left it immune from criticism, however. Elizabeth Warren, a leading candidate for the 2020 Democratic US presidential nomination, derided Levi’s this summer for marketing an all-American brand while making most of its products abroad.

It has also attracted controversy by intervening in some of America’s most bitter political debates. Its decision to speak up on immigration and gun violence has required little financial sacrifice but Mr Bergh defined it similarly as choosing “the harder right over the easier wrong” — with the long view in mind.

Earlier this year, he corralled scores of other chief executives to urge Congress to demand that gun buyers pass background checks. As a former army officer who has fired M-15 rifles, he said “the average American does not need to own one”. Many of his customers ardently disagree, exposing Levi’s to the risk of boycotts, but he expected the company to be vindicated in time.

Even in the short term, Mr Bergh argued, “this higher calling of business” is a source of competitive advantage, both in attracting talent with many other options in San Francisco and in catching the eye of shoppers who reward brands that share their values.

But can Levi’s offer a model for other boards feeling pressure to show they are considering the long-term in their decision-making?

“I hope I don’t live to regret these words, but I think we have an opportunity to show that you can run a company with profits through principles . . . and be thinking about not just shareholder returns, but stakeholder returns more broadly,” Mr Bergh answered.

More than that, he argued, companies had “almost a moral obligation” to address societal issues. “If you sit on the sidelines on some of these things, you’re not really doing what companies have the potential to do,” he said.

The 62-year-old admitted to a personal long-term ambition, too: “I said to myself, I’m only going to do one more job. So make it count, and make it be the stuff of legacies.”

What do you think would make companies more focused on creating value over the long term? Do you have experiences to share from your own business? Share your thoughts and ideas in the comments below. We will publish a selection.