The White House has told congressional Democrats that it will not co-operate with the impeachment investigation into President Donald Trump, saying the way the House committees are proceeding with the Ukraine-related inquiry “violates the constitution”.

In a letter to Nancy Pelosi, the Democratic speaker of the US House of Representatives, Pat Cipollone, the White House counsel, said the process breached the constitution because Mr Trump was being denied his right to call witnesses in his defence and obtain access to transcripts, among other violations.

“Never before in our history has the House of Representatives — under the control of either political party — taken the American people down the dangerous path you seem determined to pursue,” the White House counsel said. “You seek to overturn the results of the 2016 election and deprive the American people of the president they have freely chosen.”

Ms Pelosi fired back later on Tuesday night, issuing a statement saying if Mr Trump refused to co-operate with congress it would be “regarded as further evidence of obstruction”.

“Mr President, you are not above the law. You will be held accountable,” she said.

The White House instruction to ignore requests from panels leading the inquiry came after Democrats on Tuesday subpoenaed Gordon Sondland, US ambassador to the EU, to appear before Congress after the state department ordered him not to testify.

The heads of the Democratic-controlled committees — intelligence, oversight and foreign affairs — accused the Trump administration of obstructing their investigation by preventing Mr Sondland from appearing for a deposition and also blocking him from providing the committees with messages on a personal device.

“We consider this interference to be obstruction of the impeachment inquiry,” the committee heads said. “We will be issuing subpoena to ambassador Sondland for both his testimony and documents.”

The House inquiry is focused on a July phone call in which Mr Trump encouraged Ukrainian president Volodymyr Zelensky to investigate Joe Biden — a frontrunner for the 2020 Democratic presidential nomination — and the local business activities of his son Hunter. 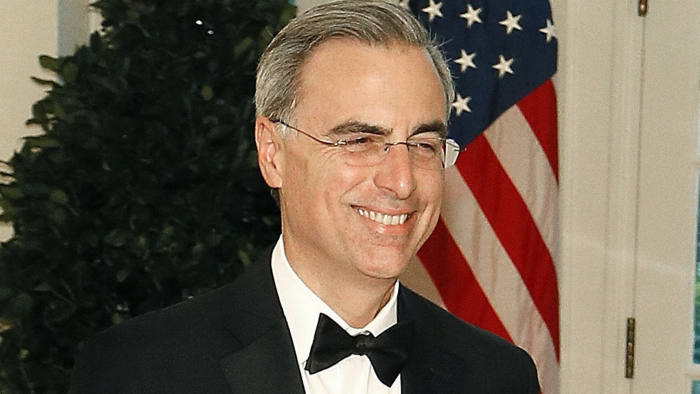 Pat Cipollone, the White House counsel one described by the president as a ‘pit bull’, said the impeachment inquiry process breached the constitution because Mr Trump was being denied his rights © Getty

Democrats had hoped to ask Mr Sondland about a series of text messages between himself and Kurt Volker, the former US special envoy to Ukraine, and other officials, in which Mr Sondland appeared to confirm that the officials were offering Mr Zelensky a meeting with Mr Trump only if he started investigating the Bidens, as well as helping a review into the genesis of Robert Mueller’s Russia probe.

The House committees are also looking into why Mr Trump withheld $391m in congressionally authorised military aid to Ukraine and whether he used the funds as a bargaining chip to urge Mr Zelensky to find dirt on the Bidens, in a move critics have said would amount to foreign interference in the US election.

Mr Sondland, a former hotelier and Trump fundraiser, had been scheduled to appear Tuesday before the House committees leading the impeachment inquiry. But his lawyer, Robert Luskin, said the state department told Mr Sondland that he should not appear for a voluntary deposition.

Mr Luskin said his client was “profoundly disappointed” he would not be able to appear, but added that he “stands ready to answer the committee’s questions fully and truthfully”.

Mr Trump said on Twitter that he “would love to send” Mr Sondland to testify, but that “he would be testifying before a totally compromised kangaroo court”.

Adam Schiff, the Democrat who heads the House intelligence committee, said the text messages and emails from Mr Sondland’s “personal device” that were being withheld by the state department were “deeply relevant” to the inquiry.

“By preventing us from hearing from this witness and obtaining these documents, the president and secretary of state are taking actions that prevent us from getting the facts needed to protect the nation’s security,” Mr Schiff added.

The Democratic-controlled House committees have proceeded rapidly with an investigation that most experts believe will lead to articles of impeachment being brought — and passed — against Mr Trump. The president is banking on Republicans senators defending him during a potential trial in the Senate.

The House committees on Monday issued subpoenas to the Pentagon and White House budget office. A separate subpoena was issued to the White House on Friday after the Trump administration did not meet a deadline to submit documents.

Republican congressmen said Mr Schiff’s decision to release the text messages between Mr Sondland and Mr Volker — rather than a full transcript of the committees’ questioning of Mr Volker last week — was the reason for Mr Sondland’s absence.

“When you are going to have a chairman release certain parts of what was said in a closed-door interview, and not release the entire transcript and give a context, you can see why they didn’t want to subject Mr Sondland to the same kind of treatment,” Mr Jordan said.