The gunman who shot dead two people in the eastern German city of Halle on Wednesday and tried to attack a synagogue was a rightwing, anti-Semitic radical and Holocaust denier, according to German reports.

Local media said the shooter, who was later arrested, had filmed his rampage through Halle and streamed the video live on the internet, much as the attacker behind the Christchurch mosque shootings last March had done.

The film reportedly showed his abortive attempt to shoot his way into the Halle synagogue, which was full of worshippers marking Yom Kippur, the holiest day in the Jewish calendar.

It then allegedly shows him shooting a female passer-by close to Halle’s Jewish cemetery, then driving to a kebab shop where he shoots his second victim.

Der Spiegel, the German news magazine, said the suspected attacker, whom it identified as a 27-year-old German man named Stephan B, insulted Jews and foreigners in the video and denied the Holocaust.

Authorities had initially said the attack was carried out by several people, who had then driven from the crime scene in a car, but they later concluded that Stephan B. acted alone.

Photos and videos published online by local media showed the shooter walking in the streets of Halle wearing battledress, boots and a helmet and carrying what appeared to be a cocked shotgun.

“This is terrible news from Halle,” said Steffen Seibert, spokesman for chancellor Angela Merkel. He said the government’s thoughts were with the friends and families of the victims.

Heiko Maas, foreign minister, tweeted: “That a synagogue should be shot at on Yom Kippur, the day of atonement, strikes us in our very hearts. We must all act against anti-Semitism in our country.”

Two victims with gunshot wounds — a man and a woman — were being treated in Halle university hospital, according to a spokesman. Their injuries were reportedly not life-threatening.

Spiegel quoted Max Privorozki, head of the Halle Jewish community, as saying the suspect threw what seemed to be Molotov cocktails or grenades at the doors of the synagogue but failed to blow them open.

“The door remained closed. God protected us,” he said. The whole incident lasted between 5-10 minutes.

Mr Privorozki said there were 70 to 80 worshippers in the synagogue on Wednesday afternoon, around the time of the attack, attending a Yom Kippur service. The festival is marked by a day-long fast and prayers.

One video published on a number of German news websites showed the gunman getting out of a car in the city centre and firing on police. Officers returned fire and he is shown falling to the ground, apparently wounded. He then gets back behind the wheel of the car and drives off. 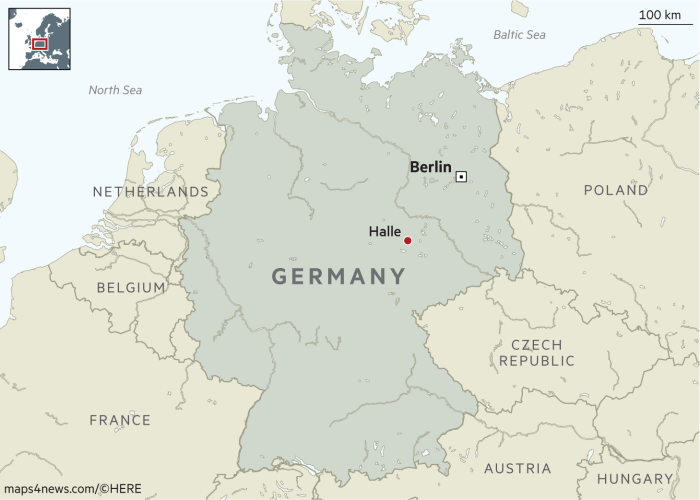 The attack comes at a time of rising concern about rightwing violence in Germany. The issue captured the headlines in June when a local politician from Ms Merkel’s CDU party, Walter Lübcke, was shot dead by a suspected extremist. It was the first assassination of a politician by a rightwing radical in postwar Germany.

According to interior ministry figures, 24,100 rightwing extremists were identified in Germany last year, a slight increase on 2017, with more than half of them prepared to use violence to further their aims.

The ministry says that the number of violent crimes committed by such radicals rose 3.2 per cent in 2018 on the previous year, while the number of anti-Semitic acts of violence rose 71.4 per cent. 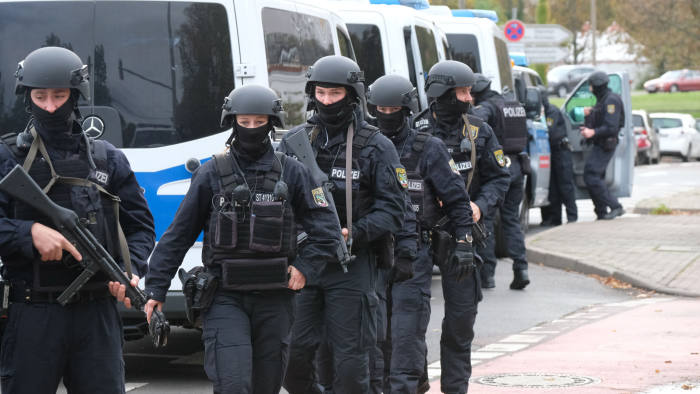 Armed police on the streets in Halle © Sebastian Willnow/dpa-Zentralbil

The Mitteldeutsche Zeitung newspaper quoted a witness who saw a “masked man with a helmet . . . and in military uniform” approach a kebab shop where he was having lunch and “raise his weapon and fire into the shop”. The witness locked himself in the toilet, from where he heard shouting and a loud bang. “It was total confusion,” he added.

Shots were also fired in the small town of Landsberg, some 15km east of Halle, police confirmed. National rail operator Deutsche Bahn said the main train station in Halle had been closed.

Germany is not the only western country to see an upsurge in anti-Semitic violence. In October last year a man killed 11 people in a mass shooting at a synagogue in the Squirrel Hill neighbourhood of Pittsburgh, in the eastern US. It was the deadliest attack on the American Jewish community.