Acting with unexpected speed, the board of Nissan made a grand show of cleaning house on Tuesday.

Makoto Uchida and Ashwani Gupta were installed as chief executive and chief operating officer, respectively, in a purge that included more experienced names being dropped as the Japanese carmaker tries to put the torrid year since Carlos Ghosn’s arrest behind it.

The overhaul was capped by a reduced role for Hari Nada, the company’s pre-eminent legal brain and the main whistleblower who triggered Mr Ghosn’s downfall. But for investors and its 140,000 employees, the critical question remains: does this decisively put Nissan’s darkest hours behind it?

Former and current executives fear it may not. The revamp looks incomplete, those people say, as long as one of Nissan’s most influential figures — Hitoshi Kawaguchi — retains his grip on power.

Until now, Nissan’s 66-year-old head of government affairs, communications and the corporate management office, has kept a low profile as a behind-the-scenes facilitator. Under Mr Ghosn, Mr Kawaguchi was a crucial and trusted lieutenant; since the former chairman’s departure, say people who have worked with him, he has amplified some of the splits within management.

Mr Kawaguchi was on Wednesday given additional roles at Nissan, including running its legal department. But people familiar with Nissan’s internal investigation in to Mr Ghosn’s financial dealings say he has a possible Achilles heel. One of the allegations for which Mr Ghosn faces criminal trial — and will deny in court — is that he contrived to understate his pay in company documents after Japanese rules changed in 2010 to require more stringent disclosure.

One of the schemes that made this possible, according to an investigation commissioned by Nissan and carried out by the law firm Latham & Watkins, was by extending the vesting period for tens of millions of dollars worth of stock appreciation rights (SARs) from one to five years. Depending on when the period was extended to, Mr Ghosn might have retired as a director of Nissan after the rights were exercised, and would therefore not be subject to the disclosure rules. There is no suggestion in the report that the scheme was either unlawful or unethical. 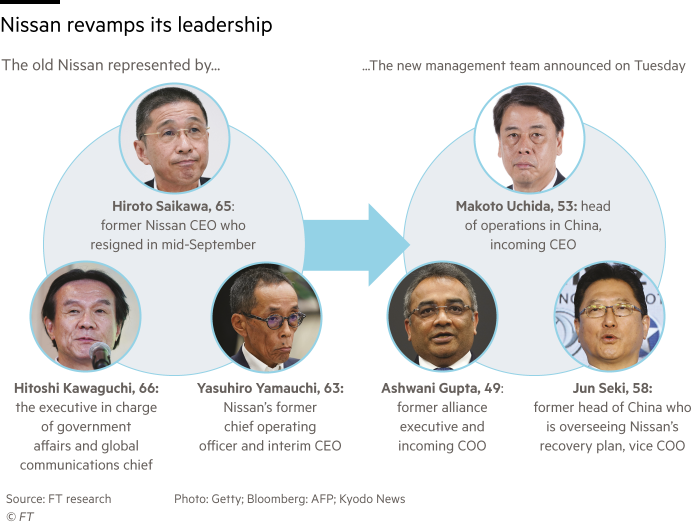 The scheme’s architect, said people with direct knowledge of the situation, was Mr Kawaguchi. And he was proud that he had found a solution to his boss’s request. According to people familiar with its contents, Mr Kawaguchi sent an email to Mr Ghosn in August 2013, in which he declared that he had a “potentially brilliant idea” — the extended SARs scheme.

Within a tight group of Nissan executives, it was no secret that Mr Kawaguchi was behind the scheme. “It was known internally as the Kawaguchi method,” said one person with knowledge of the discussions at the time.

In a statement to the FT, Mr Kawaguchi said he had proposed to Mr Ghosn and other Nissan executives a delay in exercising the SARs until March 2017, the final year of Nissan’s midterm plan. But he denied that the recommendation was made to avoid disclosure of their pay.

Although he advised Mr Ghosn in 2013, Mr Kawaguchi was not among the six executives, who were named in the report, for being overpaid using the same SAR incentive scheme that paid out cash depending on Nissan’s share price performance.

The internal probe had also found that Hiroto Saikawa, Mr Ghosn’s handpicked chief executive who was forced to resign in mid-September, had been improperly overpaid about $440,000 in 2013 by extending the SAR scheme. Hitoshi Kawaguchi, Nissan’s communications boss, has amplified some of the splits within management, say people who have worked with him © Getty

Mr Kawaguchi’s role in devising the SAR scheme, say people close to Nissan’s board, shows his skill in remaining close to where power lay within the company.

The ousting of Mr Ghosn unleashed an internal battle for control of Nissan that paralysed the company’s recovery efforts and jeopardised its 20-year alliance with France’s Renault. The internal fissures come as the global car industry wrestles with the shift to electric vehicles and slowing sales in key markets.

At the heart of that environment was Mr Kawaguchi, said people who have had a close working relationship with him. Internal feuding, which has long been part of Nissan’s corporate history, escalated in recent months after ties soured between Mr Saikawa and Mr Kawaguchi over who should lead Nissan.

“People inside Nissan are used to ganging up against the big boss,” said one official with close ties to the Japanese carmaker. “So when Ghosn was gone, everyone just started fighting each other.”

Mr Saikawa faced increasing pressure to step down after revelations of his overpayment, a plunge in profits and a breakdown of ties with Renault. But discontent grew internally as he remained ambivalent on the exact timing of his exit. 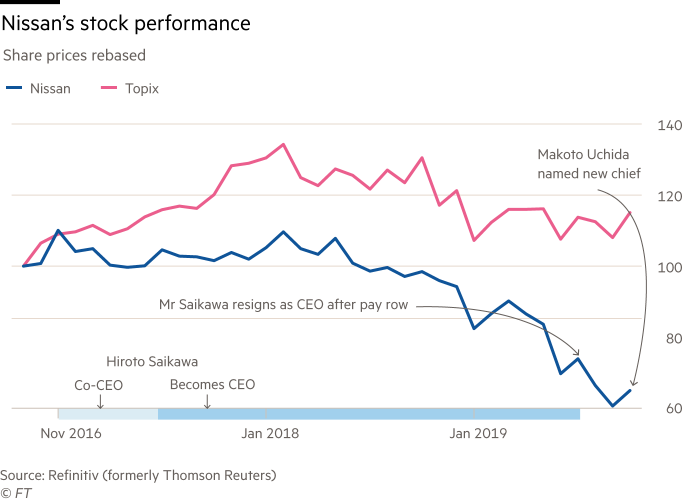 In the weeks ahead of his resignation last month, people close to the former chief executive said Mr Saikawa had pushed for a younger generation to take over after he had promoted Mr Uchida and Jun Seki, the former head of its China business, to join the executive committee in May.

Shortly ahead of the board meeting on September 9, he disclosed his plans to Mr Kawaguchi and Yasuhiro Yamauchi, the former chief operating officer. When the meeting was convened, Mr Yamauchi sided with other external directors who called for Mr Saikawa’s immediate resignation. By the end of the day, Mr Yamauchi was named interim chief executive.

Mr Kawaguchi pushed for Mr Yamauchi to become the permanent CEO, but the choice of the 63-year-old executive was rejected by several members of the nomination committee. The new management team announced this week did not include Mr Yamauchi. When asked at a press conference on Tuesdayabout his absence, Yasushi Kimura, chair of Nissan’s board, said: “We felt it was important for Nissan to be reborn. We wanted someone who could strongly carry the image of a new Nissan.”

Mr Kawaguchi told the FT he felt Mr Saikawa’s resignation was inevitable for governance-related reasons. He denied he had promoted Mr Yamauchi as the next CEO since the decision was the board’s, of which he was not a member.

Following a three-month search from a list of more than 100 candidates, the nomination committee focused on three individuals.

Having spent part of his career at trading house Sojitz before joining Nissan and because his previous postings had mostly been overseas, Mr Uchida was viewed as neutral to the infighting in Japan. His fluency in English, and his “admiration” for the alliance, which includes Mitsubishi, also helped secure Renault’s backing. Some people who have worked with him describe the 53-year-old head of China operations as blunt and level-headed. 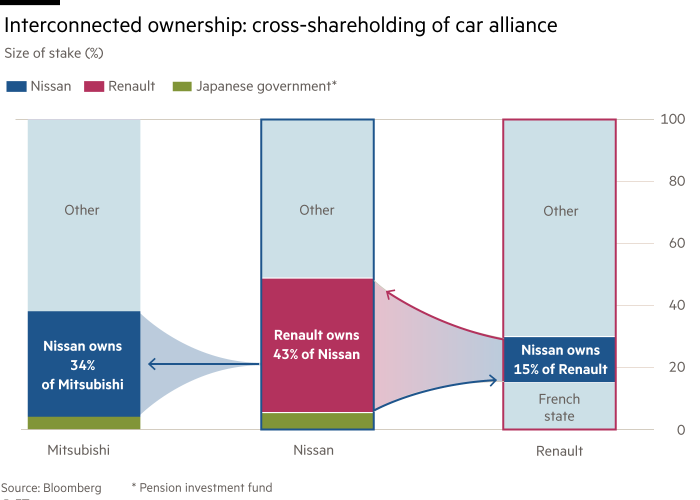 “Renault may have thought it would be easier to work with Uchida than Saikawa, but he may well be far tougher than Saikawa,” one senior figure inside Nissan said. “He will push for a more equal relationship with Renault or else his own position within Nissan will be threatened.”

Joining Mr Uchida as vice-COO is Mr Seki, who had been considered by analysts as the top candidate to replace Mr Saikawa after the 58-year-old was put in charge of the company’s recovery plan in May. But his prospects for the top job were dimmed by his close ties to Mr Saikawa, said people familiar with the discussions.

Mr Gupta, the 49-year-old former alliance executive who is the chief operating officer at Nissan’s partner Mitsubishi, will be one of the youngest ever COOs at Nissan. It was Renault’s chairman Jean-Dominique Senard who pushed for Mr Gupta to be part of the mix, but others inside the board including Mr Saikawa saw him as a strong candidate for his experience at all three companies in the alliance.

“I worked with Mr Uchida and Mr Seki 10 years ago so I hope to sit down with them and carefully discuss how we can work together to create a new Nissan,” Mr Gupta told reporters on Wednesday in fluent Japanese.

Still, some analysts said the fact that Nissan settled with a three-member leadership reflected the sharp divisions between Nissan and Renault.

“This looks like the product of a compromise,” Takaki Nakanishi, an automotive analyst who runs his own research group. “These are people with different way of thinking that will lead the company together. Opinion will be divided and it may create new lines of conflict.”

Signs exist of a new battle for control. As it became clear that Mr Uchida was going to be his new boss, Mr Kawaguchi offered to introduce the incoming CEO to senior officials inside the Japanese government, said one person familiar with the discussions. Mr Uchida politely declined, saying he would give it some thought.