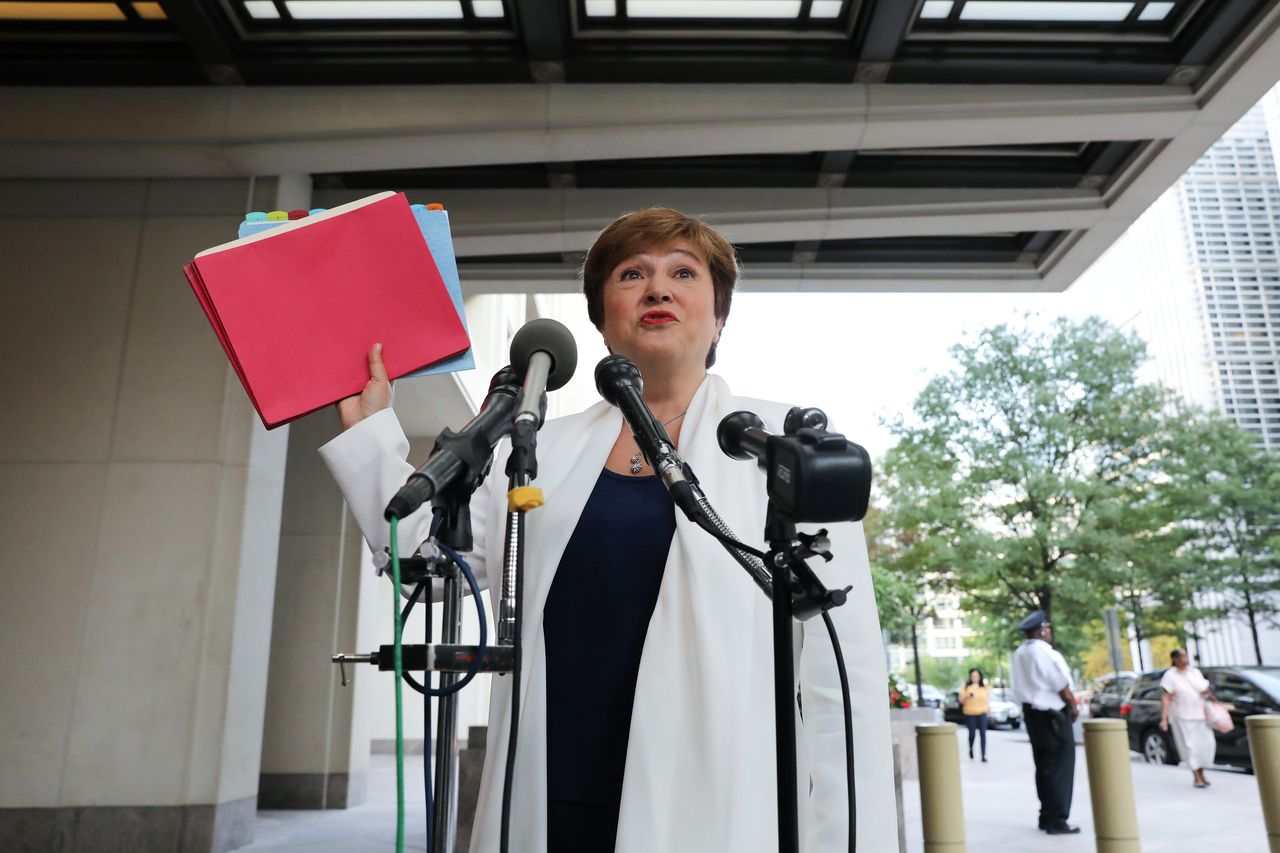 Heads of the World Bank and IMF deliver fresh warnings on the global economy, the U.S. is getting tougher on China ahead of trade talks, and Minnesota is having a WTF moment. Plus a look at the Fed balance sheet, shrinking tax revenues and the likelihood of a hard Brexit. Happy hump day.

The new leaders of the International Monetary Fund and World Bank warned in twin speeches of a deteriorating global economic outlook, just a week before they will lead the annual meetings of their institutions for the first time, Josh Zumbrun reports.

The U.S. job openings and labor turnover survey for August is out at 10 a.m. ET.

U.S. wholesale inventories for August are expected to rise 0.4% from a month earlier. (10 a.m. ET)

The Fed releases minutes from its Sept. 17-18 meeting at 2 p.m. ET. The WSJ’s Nick Timiraos previews the release here.

The U.S. is imposing visa restrictions on Chinese officials linked to the abuse of Muslim minority groups in China’s Xinjiang region, where as many as a million people are detained in camps. The visa restrictions—which will limit the ability of affected Chinese officials to travel to the U.S.—come a day after the U.S. imposed export restrictions against more than two dozen Chinese firms for having a role in government policies toward minorities, Jessica Donati and Eva Dou report.

A recent uptick in Minnesota’s unemployment rate is raising the possibility that the state’s robust labor market may be faltering, and local business leaders are stumped about what comes next. The state’s unemployment rate was 3.3% in August, a half percentage point higher than a year earlier. While employers in the state are still struggling to find employees, many are trying to decipher the health of the economy and how it will affect their businesses. “Everybody is having a WTF moment,” said Bill Gray, president of Uponor North America, an Apple Valley, Minn., plumbing pipe manufacturer. The problem: Trying to make plans for hiring and placing orders amid mixed messages from the labor market, Likhitha Butchireddygari and Shayndi Raice report.

The Federal Reserve will soon increase its purchases of short-term Treasury securities to avoid a recurrence of last month’s unexpected strains in money markets, Fed Chairman Jerome Powell said. Fed officials stopped shrinking the assets on their balance sheet in August. As a result, a crucial liability on the balance sheet—bank deposits held at the Fed, called reserves—have continued declining. Stresses in very-short-term funding markets last month suggested banks have grown reluctant to lend those reserves. Officials hadn’t said until Tuesday when they would allow reserves to grow again to avoid further scarcity issues from roiling funding markets, Nick Timiraos reports. “That time is now upon us,” Mr. Powell said.

Under the radar: “Given the balance sheet announcement, Powell’s comment on the monetary policy outlook may have been overlooked, but we read them as consistent with a further easing of policy at the late October [policy] meeting,” J.P. Morgan’s Michael Feroli said.

Into the Red Again, After the Money’s Gone

The books just closed on the first full U.S. fiscal year with the Tax Cuts and Jobs Act, and the law continues to reduce federal revenue—just as projected.

One Sandwich Short of a Brexit

The prospects for a Brexit deal appeared to fade further on Tuesday, as British and European officials traded barbs over who is to blame for the stalemate in talks. With just over a week until a critical summit in Brussels aimed at renegotiating a Brexit deal, British and EU officials clashed over the terms of the divorce and looked to shift the responsibility for any eventual breakdown in negotiation onto the other side, Max Colchester and Laurence Norman report.

Who benefits the most from a strong economy? “We find suggestive evidence that when the labor market is already strong, a further increment of strengthening provides a modest extra benefit to some disadvantaged groups, relative to earlier in the labor-market cycle. In addition, we provide preliminary evidence suggesting that these gains are somewhat persistent for African Americans and women,” Brookings’s Stephanie Aaronson, San Francisco Fed President Mary Daly, the Fed’s William Wascher and former Fed economist David Wilcox write in a new Fed discussion paper.