As Charles Li abandoned his £32bn pursuit of the London Stock Exchange, he admitted to not having a crystal ball. Few believed he needed one to know that Hong Kong Exchanges and Clearing’s bid for the LSE had looked ill-fated from the start.

A successful takeover typically needs several stars to align, but when HKEX, which Mr Li has run for almost a decade, launched its bid for the LSE a month ago the backdrop could hardly have been more fraught.

LSE shareholders were still applauding David Schwimmer, the group’s chief executive, who just weeks earlier had sealed a $27bn deal for Refinitiv, the data company best known for the Eikon desktop terminals. At the same time, fears that Beijing was threatening Hong Kong’s independence had triggered mass street protests and clouded the future of the former British colony.

HKEX’s decision to walk away draws a line under a month-long drama that saw some of the world’s biggest banks and M&A boutiques lock horns. It also leaves HKEX facing the challenge of cutting its dependence on a domestic IPO market that is struggling, while also adding to the pressure on Mr Schwimmer to make his signature Refinitiv deal work.

“The proposal had not been thought through carefully,” said Christopher Cheung, a legislative councillor for the financial services sector in Hong Kong and HKEX shareholder. “Therefore this was an acquisition with a lot of uncertainties. Withdrawing now, of course, is the best option. The shareholders of HKEX weren’t consulted, and a lot of them actually objected.”

Shares in HKEX closed more than 2 per cent higher on Tuesday, as the Asian bourse’s investors welcomed the abandonment of an ambition that Mr Li and HKEX chairwoman Laura Cha had nurtured for 12 months.

The decision was taken at a board meeting held on Monday at HKEX’s Exchange Square headquarters, close to the site of mass protests that have swept the territory for months. After a robust debate, the board decided “it was difficult to put shareholders’ money on the line when we were flying blind”, one person familiar with the matter said.

Another person familiar with the board meeting said that “London clearly did not wish to engage,” referring to the LSE’s management. “We would have had to go hostile and we didn’t want that.”

Mr Schwimmer first learnt of HKEX’s interest when Mr Li and his advisers, led by the US boutique adviser Moelis, asked for a meeting in early September at the LSE’s headquarters in the shadow of St Paul’s cathedral. After receiving a cool reception from the LSE’s management, HKEX stunned the City by going public with its proposal two days later on September 11. Within 48 hours, the LSE had issued a forthright rejection. 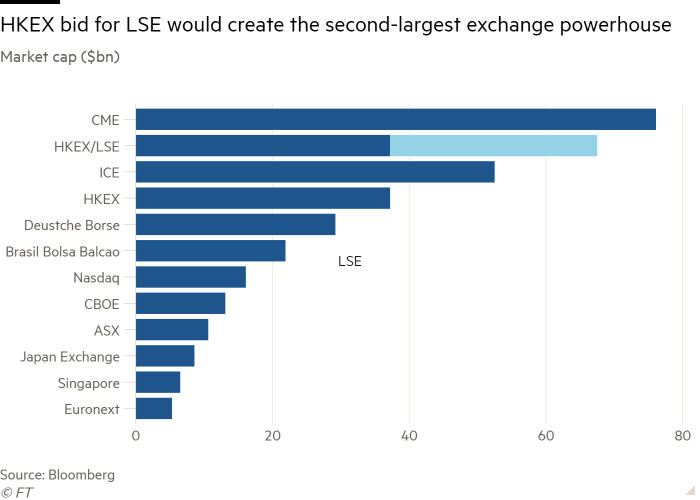 The withering dismissal by the LSE embarrassed Mr Li, two people with knowledge of the matter said, but the Hong Kong exchange quickly embarked on a three-week tour of LSE shareholders to sell the merits of its vision — and also pose questions over the Refinitiv deal.

For HKEX, buying the LSE offered the chance to link the west to Chinese capital markets that Beijing is determined to open up. As the clock ticked towards the October 9 deadline by which it would have to make a formal bid or walk away, HKEX added HSBC, Credit Suisse and UBS — banks that could help it tap the debt markets if it were to sweeten its bid — to its group of advisers.

The team at Moelis was led by Caroline Silver, who had previously advised IntercontinentalExchange, the owner of the New York Stock Exchange, on its attempt to gatecrash a planned merger between the LSE and its German rival Deutsche Boerse in 2016. Advising HKEX also pitted Ms Silver against her former colleagues from US bank Morgan Stanley, who were working on the deal for LSE. So too were her ex-Morgan Stanley colleagues from boutique Robey Warshaw. By then the LSE had also enlisted JPMorgan, Mr Li’s former employer and a specialist in deals in market infrastructure. 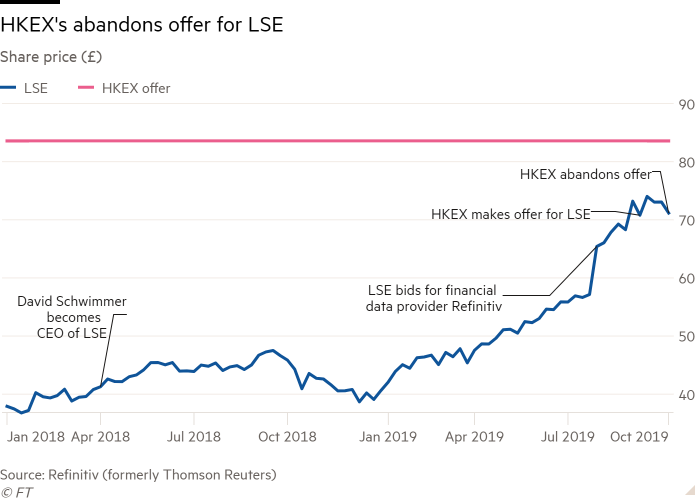 HKEX said on Tuesday that LSE’s shareholders — in contrast to the exchange’s management — had engaged with them. But few were tempted by a bid that was also beset by political hurdles.

Some believed that HKEX’s bid had little chance of regulatory approval, especially from a key US committee that monitors foreign investments that affect the country’s strategic interests. One of the LSE’s most coveted assets is LCH, the clearing house that is a linchpin of the global financial system because it is the world’s largest handler of US-dollar denominated swaps.

“Adding more cash to the offer is like putting on a nicer colour shirt — it’s not going to do enough to change shareholders’ views,” one top 20 LSE shareholder told the FT. “The Refinitiv deal offers something very different to what LSE already has, while the HKEX deal would make it more volatile and cyclical.”

According to three people familiar with the matter, HKEX drew up the plan to buy the LSE a year ago, but postponed making a move because of the uncertainty over Brexit. Its hand was then forced by the LSE’s swoop on Refinitiv.

Yet launching the high-stakes bid against such a testing backdrop has raised speculation among market participants in Hong Kong that the move was encouraged by Beijing. HKEX has been at pains to stress that is not the case.

“There are more questions than answers,” said one senior banker who has lived on both sides of the Pacific. “You would have thought such bright people would not have miscalculated and believed that they could do this deal in this environment.”

The LSE’s management discovered the HKEX decision to give up as they read the news overnight. While the retreat was not a complete surprise, shares in the LSE fell almost 6 per cent on Tuesday. It had held no discussions with HKEX since its initial rejection. Indeed, Mr Schwimmer and Mr Li had hugged the opposite sides of a conference hall late last month when they both spoke in London.

Mr Schwimmer, who has only led the LSE for just over a year, is now able to focus on executing the Refinitiv deal, which he claims will push the bourse, with its history stretching back more than 300 years, into the lucrative 21st century business of slicing and dicing market data. 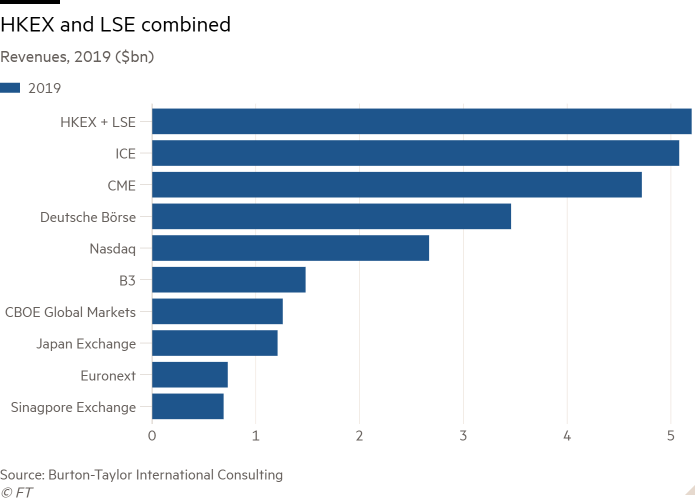 In a brief statement on Tuesday, it said it had begun seeking regulatory approval from authorities around the world. It is due to publish a circular in coming weeks and expects to hold a shareholder meeting to vote on the deal in November.

For Hong Kong, the failure threatens to turn 2019 into a poor year for the territory’s stock exchange. It was already lagging far behind New York. Mr Li was now eager to ensure Hong Kong did not suffer a double humiliation by losing its IPO crown to rival bourses in New York this year, one person with knowledge of the matter said.

Recent weeks have seen a $5bn listing by AB InBev’s Asia business and a $1bn IPO from Chinese sportswear company Topsports. But funds raised on Hong Kong’s main board in 2019 are down 42 per cent from a year ago at $18bn, while listings on the Nasdaq are up about 19 per cent at almost $30bn, data from Dealogic show.

Mr Li had described the potential marriage of HKEX and the LSE as “a corporate tale of Romeo and Juliet”. If he meant his ambitions would be dashed by a similarly star-crossed fate, he has been proved right.