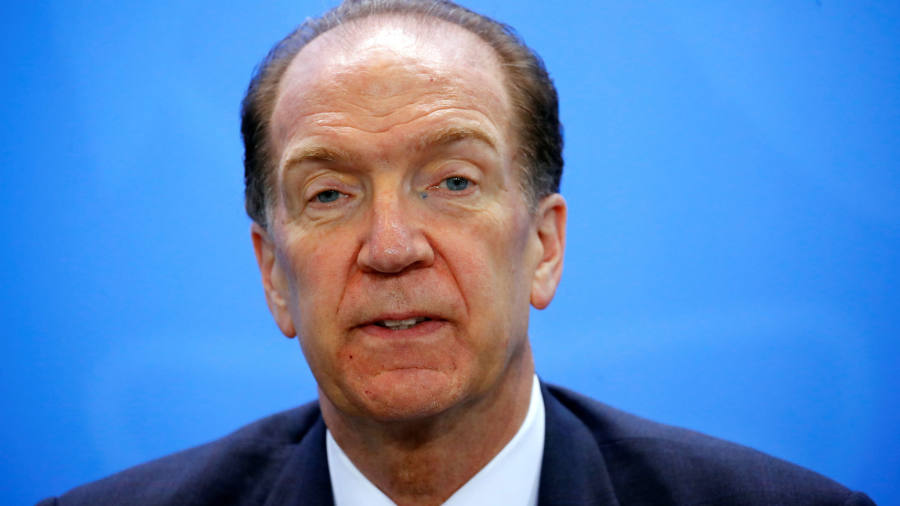 David Malpass, the president of the World Bank, has warned that global growth could fall short of the 2.6 per cent rate it predicted in June, in the latest sign of concern in multilateral institutions about the direction of the world economy.

In a speech in Montreal, ahead of the World Bank and IMF’s annual meetings next week, Mr Malpass warned that global growth was “slowing” and said he expected it to be even lower than the forecast from four months ago due to “Brexit, Europe’s recession, and trade uncertainty”.

“Moreover, in much of the developing world, investment growth is too sluggish for future incomes to rise in a meaningful way,” Mr Malpass said.

Mr Malpass, a former senior Trump administration official, sounded the alarm as he laid out the main goals of his tenure at the World Bank, which began in April this year after he replaced Jim Yong Kim, the previous president appointed by Barack Obama, who resigned to take a job in private equity.

Mr Malpass said he was encouraged by the potential of digital cash transfers as an important boost to development policy. “We’re almost at the point of having secure systems that would allow poor people to electronically receive remittances, foreign aid, and social safety-net payments as well as their earnings, and then be allowed to save and transact freely. That would be revolutionary because it allows people the freedom and opportunity they need to improve their living conditions,” he said.

In an environment of slowing growth, Mr Malpass said it was essential for countries to have “well-designed structural reforms”, including beefing up the rule of law so private companies can compete with state-owned enterprises.

“For many countries, this means opening up their closed and protected markets, allowing prices to be determined by market forces, and liberalising capital flows. The pay-off is that countries that make this step attract more investment, both foreign and domestic, and can generate growth that benefits a broader part of the population,” he said.

Mr Malpass’s preoccupation with the European economy echoes broad fears about stagnant and even shrinking growth in Germany and Italy. However, the IMF, in its latest forecast in July, predicted growth of 1.3 per cent for the eurozone in 2019, rebounding to 1.6 per cent in 2020.