Mitch McConnell, the Senate majority leader who rarely chastises the president, warned Mr Trump not to follow through on a move that he suggested was in line with the foreign policy of Barack Obama, the former president.

“As we learned the hard way during the Obama Administration, American interests are best served by American leadership, not by retreat or withdrawal,” Mr McConnell said.

The White House on Sunday said the US would remove its forces from near the Syrian border with Turkey after Mr Trump spoke to Recep Tayyip Erdogan, Turkish president.

In a call with reporters in the wake of the criticism, a senior US official denied Mr Trump had given the go-ahead to a military incursion. He said the president had decided to remove 50 US special forces from a limited area on the border to make sure they were not caught in the crossfire if Turkey went ahead with the operation.

“This does not constitute a withdrawal from Syria. We’re talking about a small number of troops that will move to other bases within Syria,” said the official, who added that any suggestion the move was giving “a green light for a massacre is irresponsible”.

As the White House struggled to address the fallout, Mr Trump told reporters that he had been elected on a promise to bring US troops home from “endless wars”.

“We wanna bring our troops back home. It’s been many, many years, it’s been decades in cases . . . we are like a police force over there,” Mr Trump said.

Asked by the Financial Times if Mr Trump had told Mr Erdogan not to proceed with the operation, the senior official would only say that the president and his military leaders had made clear to Ankara that they did not endorse the Turkish operation, which has yet to begin.

One person familiar with the move said Mr Trump discussed the situation with his military advisers, who had been monitoring Turkish preparations, over the weekend before taking a final decision after speaking to Mr Erdogan, who had requested a call with the US president.

The decision spawned a coalition of critics from progressive Democrats and hawkish Republicans to influential evangelical leaders who are usually big backers of Mr Trump.

“The president of the United States is in danger of losing the mandate of heaven if he permits this to happen,” said Pat Robertson, an evangelical leader.

Bernie Sanders, the Vermont Democratic senator running for president who often opposes military intervention, said it was “extremely irresponsible”. Lindsey Graham, a Republican senator who is generally a fierce defender of Mr Trump, said the decision was a “shot in the arm to the bad guys. Devastating for the good guys”.

“No matter what President Trump is saying about his decision, it is EXACTLY what President Obama did in Iraq with even more disastrous consequences,” Mr Graham tweeted.

Mr Graham warned that Congress would introduce bipartisan sanctions against Turkey if it invaded Syria and would call for its suspension from Nato if it attacked Kurdish forces.

Experts compared the latest controversy with Mr Trump’s abrupt decision in December to remove troops from Syria, which prompted the resignation of defence secretary Jim Mattis, before being partly reversed.

“The idea of pulling US troops out of Syria is as misguided today as it was when Jim Mattis resigned over it,” said James Stavridis, a former US Supreme Allied Commander at Nato. “On what other issue can you find agreement between Lindsey Graham and Bernie Sanders? Hopefully the president will reverse himself . . . before more damage is done.” 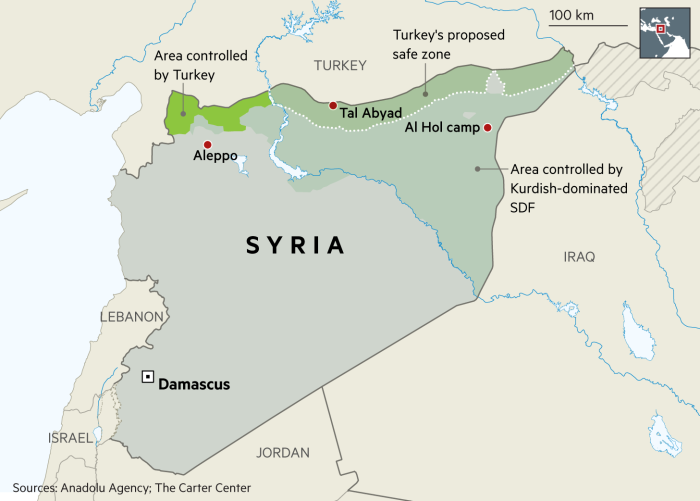 As Republicans attacked him on Monday, the president appeared to shift his public stance. Writing on Twitter, Mr Trump said: “If Turkey does anything that I, in my great and unmatched wisdom, consider to be off limits, I will totally destroy and obliterate the Economy of Turkey.”

Mr Trump on Monday said he had consulted with his military advisers. But Mona Yacoubian, a Syria expert at the US Institute of Peace, said the decision would frustrate military leaders who had hoped that Mr Trump had tempered his desire to withdraw forces from Syria.

“Ever since Trump tried to tweet us out of Syria in late December, there has been this fear in the back of everyone’s minds that given his erratic and volatile approach to foreign policy it was always possible that after another call from Erdogan he could tweet us out,” she said. “But there had been a certain sense that those worst instincts had been quelled.”