From the Italian Renaissance-style Lord & Taylor building on New York’s Fifth Avenue to the postmodernist landmark One Poultry in London, WeWork has swept up office space at an unprecedented rate since opening its first location in Manhattan less than a decade ago.

But the shared office provider’s breakneck expansion is set for a sudden slowdown, cutting out a significant source of demand in the large urban property markets where it operates.

In the aftermath of the company’s failed IPO, which prompted the demotion of its chief executive Adam Neumann and triggered fears of a cash crunch, there are already signs of problems brewing.

Two landlords of large WeWork sites in London, who asked not to be named, said they would not sign new leases for the foreseeable future and were making contingency plans for their existing WeWork offices in the event of a restructuring.

“It would not be prudent for us to do anything [new] with them until we see how the new management will operate,” one landlord said.

Peter Papadakos, a managing director at the research company Green Street Advisors, noted: “We have only seen the benefits from the growth in demand from flexible and co-working operators. What are still to come are the negative repercussions.”

Last week rating agency Fitch downgraded WeWork’s credit rating to CCC+, a level at which “default is a real possibility”. It said “the risk that the company is unable to restructure itself successfully has increased materially”. 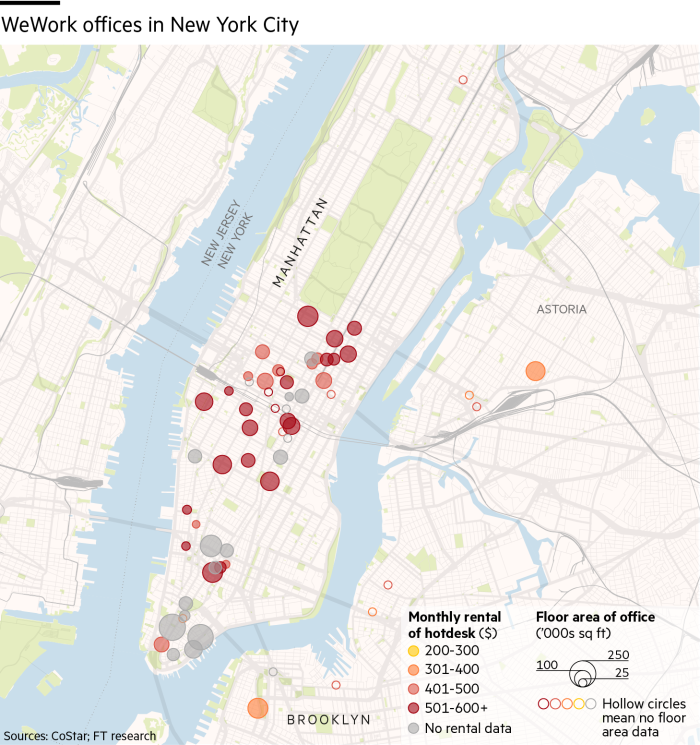 The real estate industry has in recent years embraced WeWork and its rivals. WeWork has 7.7m sq ft of office space in New York City and 4.1m in London, according to data provider CoStar, making it the largest private tenant in both cities. Other key locations include San Francisco, Bangalore and Shanghai.

Much is now at stake for its landlords. They have a total of $47bn in rent due from WeWork across the life of its leases, according to the company’s filings. Some $2.3bn of lease and other cash obligations fall due in 2020, according to academics at Harvard Business School.

Two London building sales with WeWork as a tenant have collapsed since its IPO was pulled, although people close to one — the £850m sale of Southbank Place — maintained the group’s problems were not the reason.

In the event of a restructuring that involved WeWork ditching some of its sites, landlords would bring in other flexible office providers to fill vacancies or install their own brands, said agents and landlords.

Mark Dixon, chief executive of the UK-listed shared office group, IWG, said: “We are always in discussions with landlords and those discussions have picked up [since WeWork’s problems] . . . it’s the flight to quality.”

Landlords’ priority would be to avoid flooding the market with space, said two agents working on contingency plans.

Alex Snyder, assistant portfolio manager at CenterSquare Investment Management in Philadelphia, said: “WeWork has structured many of its leases so that they can simply collapse the special purpose entity it’s trapped in and walk away. This vacancy pressure on the market [would] be painful.”

Any such collapse is not seen as imminent. Fitch said WeWork had enough cash for at least four quarters. The company wants to sell ancillary businesses and is in talks for new investment. 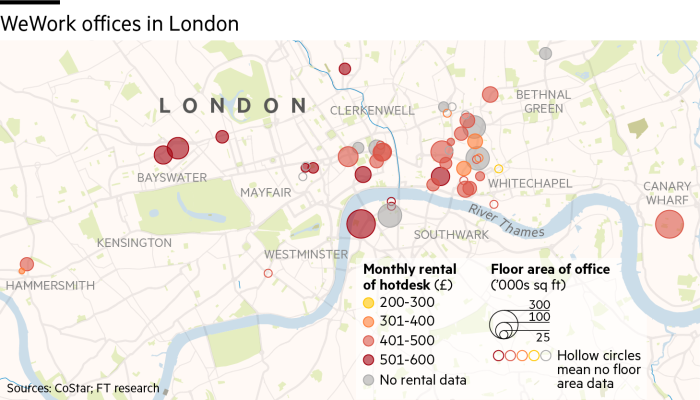 Even so, the loss of WeWork’s voracious appetite for new space may prove significant for office rents.

Mr Snyder said the company had created “marginal demand . . . over the past several years in major markets [such as Manhattan and Washington DC] that haven’t otherwise had a lot of gas in the tank”.

He said those two markets “have struggled mightily” to generate genuine rental growth. “Now that the Goliath of the industry has paused leasing, I think it will make it that much harder for these markets to muster up any kind of meaningful growth.”

Flexible office providers have accounted for 17.1 per cent of central London office demand since 2016 and 7.8 per cent in Manhattan, according to Cushman & Wakefield.

In London, about 6 per cent of demand has been down to WeWork alone, said Mat Oakley, head of UK and European commercial property research at Savills. “For a single company that’s probably unprecedented.”

He expected “a period of reassessment by operators, landlords and lenders over the next few months” but believed there was sufficient demand for growth to resume. Rivals in the sector include IWG, Knotel and Blackstone-backed The Office Group.

Mike Prew, analyst at Jefferies, said shared office groups had bid up rents in exchange for long rent-free periods. “This is the capital market trigger for a derating of London office values,” he warned.

With many newer sites, landlords have paid more cash to WeWork than they have received, because they have offered rent-free periods and paid for the company to fit out its offices. WeWork collected almost $455m of these upfront payments in the first six months of 2019. 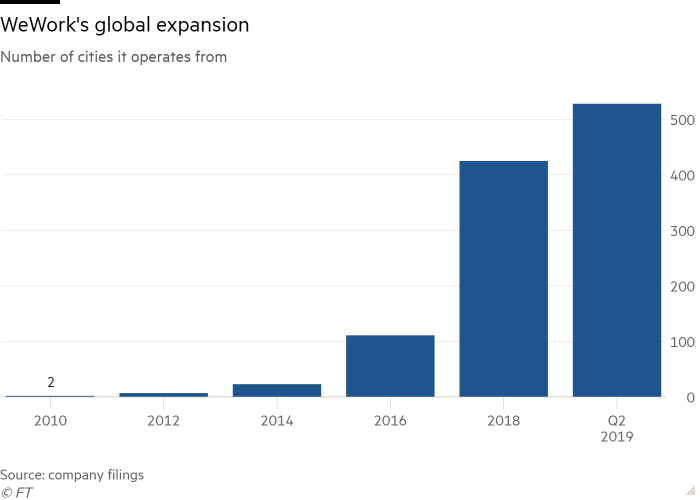 WeWork said: “WeWork’s core business is strong and we continue to evaluate opportunities with our landlord partners. We are committed to the London market . . . The company intends to fully honor its lease commitments.”

Not all landlords are unhappy. The William Kaufman Organization signed a New York lease with WeWork last week. Mike Hussey, chief executive of the London developer Almacantar, said he would do further deals with the group. “We are really happy to work with WeWork because they provide the expert management, the oversight of the office space . . . We’d have to employ a lot of people to achieve even half of what they do.”

Chris Grigg, chief executive of British Land — which owns one WeWork site — said he expected the company to “expand a lot less quickly, if at all, and . . . push up some of their prices to close that revenue gap”.

But he did not expect a collapse. “I don’t think that just because they couldn’t raise money at $47bn they are going to go bust next week . . . [and] some of what they did, in terms of really focusing on the customer, has been good for the real estate industry.”

That focus on the customer may prove crucial as the company rushes to reassure landlords and tenants.

“If I was thinking of moving into a WeWork site today, I would actually have second thoughts because is WeWork going to be around in three years?” said Mr Papadakos.