The U.S. jobs market’s resilience is not extending to wages, which fell in September for the first time in two years, as companies still aren’t ready to meet a tight labor market with higher pay and workers still are not demanding more.

While the September nonfarm payrolls report showed that the 3.5% unemployment rate is at a fresh 50-year low, it also indicated that average hourly earnings are on the decline. The one-cent-an-hour slip to $28.09 was the first month-to-month drop since October 2017 and the 2.9% year-over-year rise in wages was the slowest increase since July 2018.

Sharp drops in unemployment in the past often have brought commensurate earnings, but not this time around.

One reason for the change: Fear.

“There is something real going on that even though it’s a tight labor market, employers are becoming more risk-averse,” said Julia Pollak, labor economist at ZipRecruiter, a leading online employment marketplace. “Indicators showing the risk of a recession are making employers a little more panicked. We conduct employer surveys every month, and in those surveys job seekers and employers are showing that they are increasingly nervous about the risk of recessions, trade wars and other sources of uncertainty.” 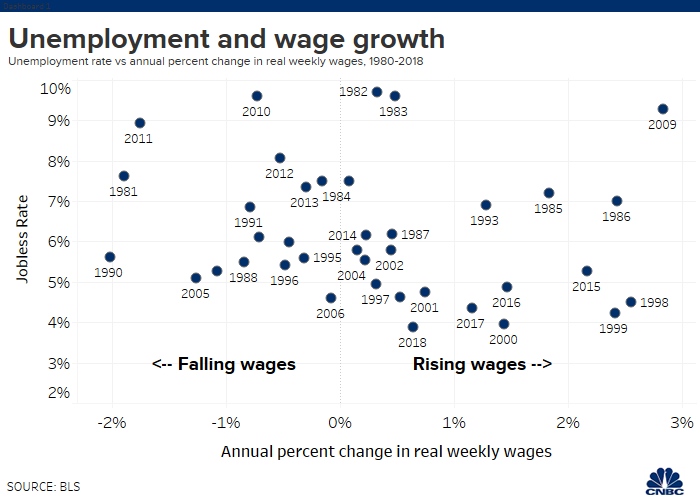 Indeed, even though the economy continues to grow at about a 2% pace, risks have become elevated that a combination of global weakness, the U.S.-China tariff war and geopolitical turmoil could cause a slowdown or recession in the U.S. Sentiment indicators last week showed the manufacturing sector continuing in contraction and the services sector just barely in expansion.

The New York Federal Reserve’s recession gauge is at 38%, easily its highest since the financial crisis.

Reasons for optimism and worry

Such jitters are causing employers to be more tepid in the wages they are offering, even as the demand for labor increases and vacant jobs remain hard to fill. There were 1.2 million more jobs than available workers as of the end of August, the most recent month for which Labor Department data is available.

Pollak said there are “reasons to be optimistic” that the U.S. will stay out of recession and that if one comes it’s likely to be shallow. One point of hope she finds is that wages are still continuing to grow for workers on the lower end of the earnings scale.

However, there continues to be concern over whether the low jobless rate represents strength or is signaling an end-cycle peak.

David Rosenberg, the often-bearish chief economist and strategist at Gluskin Sheff, points out that the last time unemployment hit 3.5%, in December 1969, a recession followed a month later, adding that the headline jobless rate “has no bearing on the wage backdrop.”

“Even if you believe the headline, and ignore the cyclical weakness at your peril, the lack of wage growth is going to be a big problem for the ‘resilient’ consumer heading into the holiday shopping season, even with the delayed tariffs (which I am sure will get delayed again),” Rosenberg said in a note after the release of the jobs report. 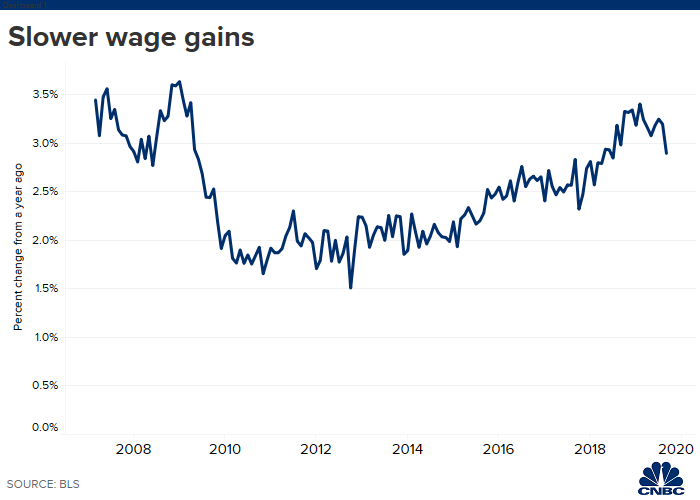 To be sure, other measures of wages are showing that the recent weakness could be anomalous.

The New York Fed, for instance, conducts a reading every four months of worker wages and expectations called the Survey of Consumer Expectations Labor Market Survey. In the most recent results, which extend through July, workers reported an average wage of $66,935, an increase of 7% from the same period a year ago. The average full-time offered wage rose 4.5% to $54,943.

Goldman Sachs said its own proprietary wage tracker, which includes the Labor Department’s average hourly earnings tracker plus four other measures, sees a gain of 3.2% for the third quarter.

Also, worker confidence continues to be strong, with the job leavers level of 14.6% of the labor force in September just a shade below its highest level in 17 years, according to government data.

“This is a huge show of ‘confidence’ among job holders suggesting they perceive a labor market which is healthy enough to take the risk of leaving a ‘bird in the hand’ for something better,” wrote Jim Paulsen, chief investment strategist at the Leuthold Group. “And, it is an illustration of household confidence which will certainly be noticed by employers and should help boost business confidence as well.”

Waiting for the Fed

Still, the generally sluggish trend and uneven dispersion of gains is fueling concern.

“We’ve seen increases in minimum wage and increases in pay for low-income workers, however overall, average wages have the same buying power they did 40 years ago when accounting for inflation,” Michelle Armer, chief people officer at CareerBuilder, also an online jobs marketplace, said via email. “Demand for middle-wage jobs is growing, and high-wage and low-wage job growth is eclipsing middle-wage job growth by a significant margin, creating a hollowing effect in the economy.”

In addition to the slowing gains in hourly wages, weekly earnings rose just 2.6%.

Financial markets, on the other hand, are fine with the reduced wage gains.

Stocks rose sharply Friday after the jobs report, with investors assuming the low inflation pressures will keep the Federal Reserve on its rate-cutting path. The central bank policy arm will meet at the end of October, with anticipation strong that it will approve a quarter-point reduction in short-term interest rates.