Police fired tear gas and beanbag rounds at the crowds while some protesters responded with petrol bombs as the territory’s four-month-long political crisis entered a new and more dangerous phase, claiming its second gunfire victim on Saturday.

Behind them they left a trail of destruction. Protesters smashed the windows of Starbucks stores, whose owners they see as being close to Beijing, throwing the chairs and tables on to the street. They trashed mainland Chinese bank branches and sprayed them with graffiti. “It supports the spread of totalitarianism in Hong Kong,” one protest slogan read on the wall of a branch of Bank of China (Hong Kong).

“I don’t care about the mask law. Just by coming here, I’ve broken the law already,” said a protester who identified himself only as James. He said the city’s emergency law, which was used to enact the mask ban, threatened rule of law in the city.

Carrie Lam, Hong Kong’s chief executive, on Saturday invoked the city’s colonial era Emergency Regulation Ordinance for the first time in more than 50 years as part of the move to ban masks. Demonstrators use masks to conceal their identity and protect against tear gas and pepper spray.

Ms Lam said the ban aimed to “end violence and restore order” in the protests, which started as opposition to a law that would have allowed suspects to be extradited to China but have since expanded to include demands for universal suffrage. 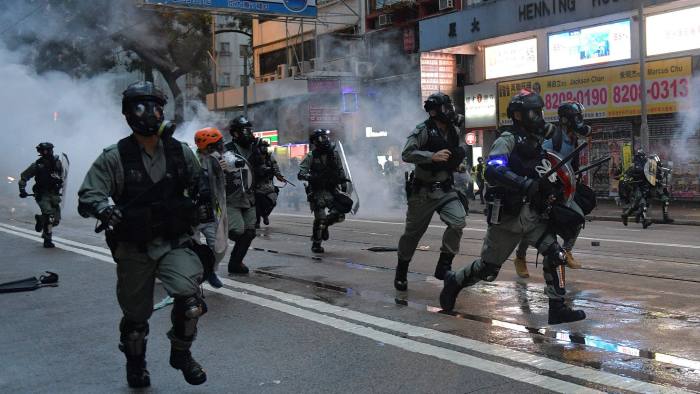 However, the decision, which came into effect at midnight on Friday, triggered three nights of confrontations over the weekend.

On Saturday, a 14-year-old became the second teenage protester to be shot with live ammunition since the protests began in June. He was in stable condition following surgery, according to the city’s Hospital Authority.

Police said the officer who shot him had been acting in self-defence. The boy was arrested for rioting and assaulting police.

The city’s commuter rail operator MTR closed its entire network early on Friday, leaving thousands of people stranded. The network remained closed on Saturday, with only a partial service resuming on Sunday. 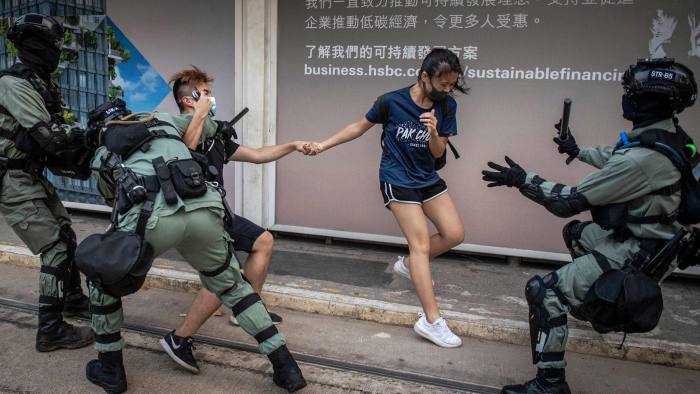 The city’s economy has been left reeling from the twin shocks of the US-China trade war and the protests. Hong Kong’s stock market has been the worst performer among developed markets in the third quarter.

TS Lombard, an independent investment research company, said there was likely to be “further downward momentum in Hong Kong stocks as mainland investors start to price in the escalation in tensions”.

The Hong Kong Monetary Authority, the territory’s de facto central bank, was forced on Sunday to respond to rumours that it would impose a cap on daily bank withdrawals, calling the speculation “totally fake and unfounded”.

There are signs that the increasing violence could also be creating a rift in the movement, between radical protesters and those who support a more moderate approach.

Kevin Yam, a prominent Hong Kong lawyer viewed as sympathetic to the protests, urged a less violent approach. “(1) no more vandalising of businesses and MTR [the commuter railway], as that only hurts innocent employees and the public; and (2) no more vigilante acts so as not to descend to the level of violent cops or triads,” he wrote on Twitter.

A group of pro-democracy lawmakers launched a judicial review against the masks ban, alleging Ms Lam had violated the Basic Law, the city’s constitution drawn up following the handover from British to Chinese rule in 1997. The lawmakers claimed Ms Lam invoked the rules without consulting the Legislative Council, the city’s de facto parliament. The High Court rejected the request on Sunday.