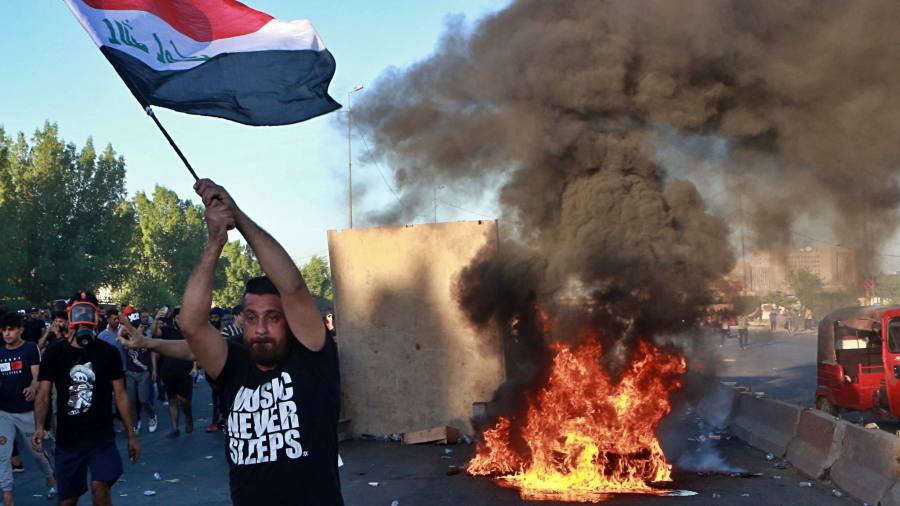 The civil unrest has escalated into the oi-rich country’s worst outbreak of instability since it declared the defeat of Sunni jihadis Isis in 2017. It poses a severe challenge to prime minister Adel Abdul Mahdi’s one-year-old government.

The apparently leaderless demonstrations are protesting against a lack of jobs and services, but also endemic corruption that is perceived to reach the top of government.

Politicians are “stealing, stealing from the year 2003 until now” said Yousif Emad, an unemployed anthropology graduate. “Enough. We need solutions.”

Pressure was heaped on Mr Abdul Mahdi on Friday by populist Shia politician and former militia leader Moqtada al-Sadr, who called for the government to step down and for fresh elections. His parliamentary bloc Sairoon, which won the largest number of seats in last year’s elections, said it would boycott parliament when it meets on Saturday to discuss the protesters’ demands.

Iraq’s most important Shia religious figure Ayatollah Ali al-Sistani blamed the government for the protests, but did not call for the administration’s resignation.

Iraq regularly sees street protests, with people expressing frustration at their inability to influence a political system seen as remote and corrupt. But these demonstrations, apparently not organised by any political party, quickly spread from Baghdad to other Iraqi cities at an intensity and speed which took security forces and the government by surprise.

Human rights groups have criticised Iraqi security forces for their heavy-handed response to protests that have reportedly been mostly peaceful albeit with some incidents of protesters fighting back. Security forces have used live ammunition, tear gas and water cannon to quell protests. Several police officers have been killed, news agencies reported.

Unknown snipers shot at protesters in Baghdad on Friday, according to an witness and news agency reports.

Laith Rafia, a demonstrator from the working class majority Shia neighbourhood of Sadr City, told the FT he had seen a sniper shooting at protesters near a hospital.

“A person who fell down, we went to carry him and they kept shooting at us,” said Mr Rafia. He said he refused to go home despite the danger: “I will see people’s brains being blown up but I will not retreat.”

Mr Emad was trying to reach Baghdad’s central square where demonstrations usually convene, but security forces had blocked his route.

The authorities have resorted to curfews — lifted on Saturday — and widespread internet shutdowns to try to quell the protests.

Protesters had continued to defy the danger and curfews, motivated by deep economic grievances, political disillusionment and anger over lack of public services.

“I live in a very small house in a bad neighbourhood, no sewage, no electricity, no water,” said Mr Emad, 25, who is married with one child. “I’m a graduate, I have no job, how do you expect me to live? How should I raise my children?”

Iraq’s fossil fuel export-dependent economy has been unable to satisfy a growing demand for jobs. Almost 60 per cent of Iraq’s population of 40m is aged under 24, and around a fifth of Iraqis aged 15-24 are neither in employment, education or training, according to the World Bank.

Nor are Iraqis satisfied with the performance of the post-2003 political system. Created to institute ethnic and sectarian power sharing after the US-led invasion of Iraq which toppled dictator Saddam Hussein, it has largely failed to strengthen state institutions or provide security.

Renad Mansour, fellow at Chatham House, said the protests reflected a “general disillusionment with the political process and political parties”.