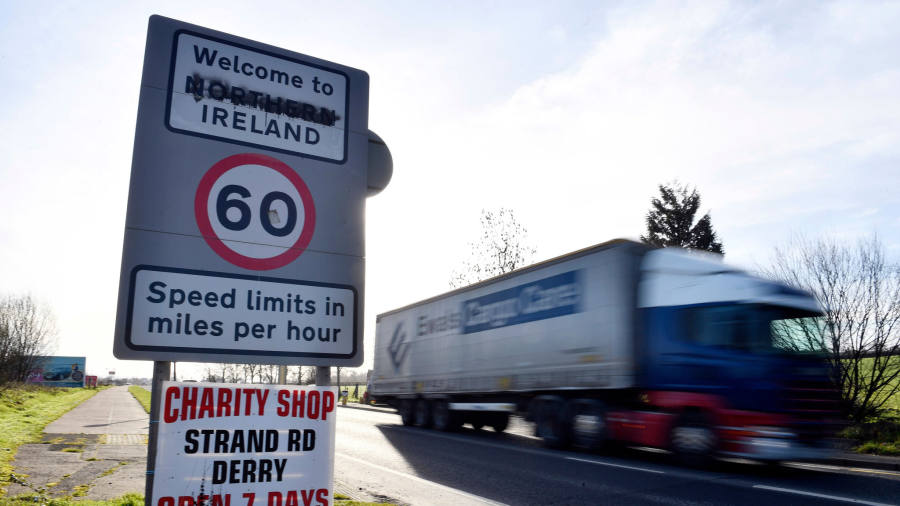 Not in a long time has the gap in meaning between Britain and Ireland seemed wider.

This week, UK prime minister Boris Johnson released details of his plan to replace what has become habitually known in London as the dreaded, or even sometimes hated, backstop — the element of his predecessor Theresa May’s Brexit withdrawal agreement that proved so objectionable to her own Conservative MPs. It marked a slight, though real, edging towards the position of the EU and the Irish government.

Under the new proposals, most goods produced in Northern Ireland would align to EU single market rules, but the region would remain inside the UK’s customs zone — with Mr Johnson’s team inviting the EU to sign a commitment pledging never to erect fixed infrastructure at the border itself. Rather, physical checks and tariff collection would happen in other places, in factories and via “intelligence-led” enforcement. This plan imposes a stark new demand (although we knew it was coming): that Northern Ireland be in a separate customs zone to the rest of the island of Ireland.

But what more could Ireland — either the state or the island as a whole — ask for? Such has been the tenor of reaction in the UK, and not only among Brexiters. If physical infrastructure and people in uniform stopping vehicles can be avoided at a specific line on the map (and that is doubtful under the plans submitted this week) then what is the problem? And after all, why should a small country’s concern be allowed to dictate the relationship between larger powers?

In Brian Friel’s play Translations, set in the early 19th century not long after the Act of Union created the United Kingdom of Great Britain and Ireland, a team of British cartographers map the landscape in the north-west of Ireland. With the help of a willing local, they convert longstanding place names from the Irish to the English language. Complicated, older meanings are lost in the process — which is necessarily one of simplification.

The British officers want to order things, not entirely unreasonably, but generally in a way that suits their ends. They are reminiscent of today’s Alternative Arrangements Commission, a group of mostly pro-hard Brexit MPs and border technology advocates whose “solutions” to the border question have been warmly embraced by Number 10, and partially incorporated into this week’s proposals on customs.

This group declared crisply — and ministers have followed this line ever since — that people and businesses on the island of Ireland will simply have to accept some disruption as a result of the UK’s decision to leave the single market and customs union. In compiling their June report, they also called for special economic zones for particular areas of high cross-border economic integration, including the Derry City-Donegal region where Translations is set.

Friel, whose work was defined by the border territory of the north-west of Ireland, would no doubt have been amused by the latter-day surveyors’ generous declaration that they were “persuaded that this area represents a single region for economic activity and one that spans the border”. This had, of course, never occurred to anyone living there.

But other things have changed since the 1800s, when anglicisation meant modernity and rationality, and most things Irish — including the language — were seen to mean the opposite. Now, the irrationality and mythmaking belongs to the project of hard Brexit. The Irish, long famed for linguistic flight of fancy, are now the sober plain speakers, insisting not only on an absence of checkpoints at the border but a genuinely seamless island for movement of goods and people.

Hard Brexiters, in contrast, can appear to live in their own universe of meanings, removed from reality. As a character in Translations says, describing his own fading Gaelic world, “a civilisation can be imprisoned in a linguistic contour which no longer matches the landscape of fact”.

Despite the obvious frustration of some in London, it is unlikely that either officiously simplistic solutions, or dreamy language, will be enough to satisfy the Irish government. Or indeed the EU.

Britain and Ireland live together on these islands amid a history dense with meaning, and not all of it good. That history is most dense in Northern Ireland. “To remember everything is a form of madness,” warns one of Friel’s characters. If people on the island of Ireland need to be reminded of this occasionally, now may be a good time to remind some on the island of Britain that to forget everything is madness, too.

The writer is a former official in Number 10 Downing Street, now a consultant, and occasionally writes about politics