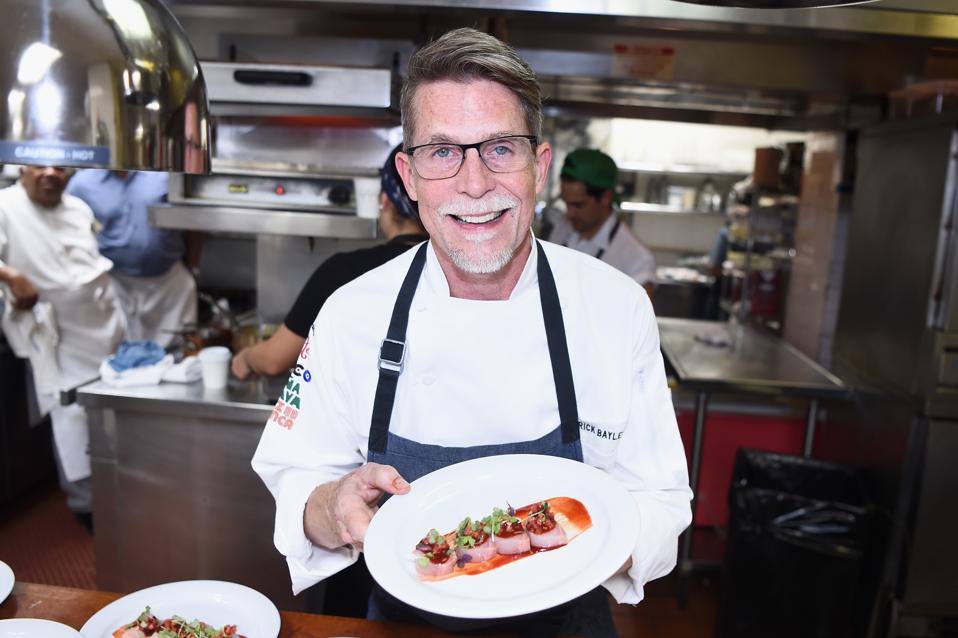 Chef Rick Bayless is getting into the food hall business. (Photo by Dave Kotinsky/Getty Images)

Rick Bayless is arguably Chicago’s best-known chef, thanks to his years on PBS, his restaurants and his eponymous line of food products.

But, he’s never been one to look down on a location.

Bayless has multiple Mexican-inspired places in the Windy City, another at Disney Springs in Florida, and fast food outlets in Chicago O’Hare Airport, as well as Macy’s and a suburban shopping mall.

Now, Bayless is going where a lot of people have looked down: the Willis Tower.

Bayless announced Friday that he plans to open Tortazo, a premium fast-casual restaurant, in a huge new food hall at the base of the famous black tower.

(As a third-generation Chicagoan, I can’t think of the building as anything but the Sears Tower, but for accuracy’s sake, I’ll go along with Willis Tower.)

The food hall is called Catalog, and it’s already signed up some other top-notch names. It will feature Shake Shake, Sweetgreen and Starbucks, as well as local favorite Do-Rite Donuts.

Catalog is scheduled to open later this year, and it will feature five stories of dining, retail and entertainment.

It is part of a $500 million renovation at the Willis Tower, in the Chicago Loop.

The Chicago food scene already abounds with food halls, including Revival, which is just a couple of blocks from the Willis Tower.

But Bayless, a seven-time James Beard Award winner, hadn’t jumped into the fray. When he does so, Tortazo will make a statement.

It’s a 3,000-square-foot space, with a menu of tortas, chilaquiles, bowls, salads and churros. Tortazo will also feature a full bar with margaritas, tequila based palomas, beers and wines.

The restaurant name is derived from combining the word torta and azo, a Spanish suffix used to emphasize the word to which it is appended. Thus, Tortazo means “tortas with great impact,” according to a press release.

Bayless opened his first restaurant, Frontera Grill, in 1987. His most recent places include Bar Sotano, in the basement of the building he owns on North Clark Street in Chicago.

Earlier this year, he teamed with another Beard Award winning chef, Zachary Engel, owner of the recently opened Galit, for a Mexican-Mediterranean mashup.

Now, he’s going tall. To be sure, a food hall won’t be as much of a stretch for him, given that he’s condensed the preparation of his Mexican cuisine to fit the needs of impatient diners.

And, he operates a fast casual concept, called Xoco, next door to his fancier places. (Try the tres leches cake.)

Now, the Willis Tower location may make his food accessible by even more people.

As Bayless put it in the news release, “Willis Tower is truly the best intersection in the city to capture both Chicago residents and tourists – it’s the ideal place for Tortazo.”