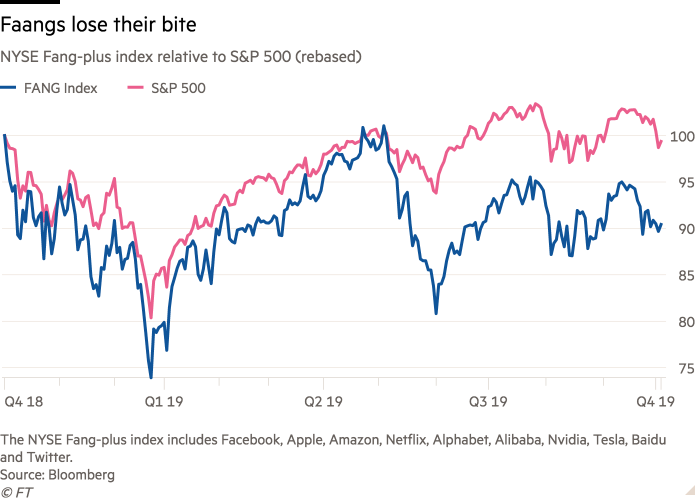 The group of technology stocks that helped propel the US stock market to record highs in recent years — Facebook, Apple, Amazon, Netflix and Google — has become a drag.

The NYSE Fang-plus index, which also includes Alibaba, Nvidia, Tesla, Baidu and Twitter, has lagged behind the broader market by nearly 10 per cent over the past 12 months.

Analysts say the drop signals a shift in investor appetite from high-growth tech stocks towards more defensive corners of the market.

Over the past year, the best-performing sectors of the S&P 500 basket of blue-chips have included utilities and consumer staples, seen as a safe haven during an economic downturn. A dimming global growth outlook, combined with uncertainty over a US-China trade deal, have prompted investors to favour defensive stocks.

The poor performance of stocks in the Fang-plus index is a “red flag” for investors, says Helen Thomas, who runs Blonde Money, a London-based consultancy. “What has happened to ‘the Faangs’ . . . will eventually happen to the broader stock market,” she said.

Chinese internet services company Baidu’s share price has halved over the past 12 months, after falling short of earnings expectations, making it the worst performer of the group.

Nvidia, the US graphics chip manufacturer, has been weak too, with its stock falling 35 per cent over the past year. Investors have also become cooler towards Netflix, the streaming company, due in large part to heightened competition from Apple and Disney. Its shares are down about 26 per cent over the period.

Shares in Facebook, which has grappled with the fallout of a data privacy scandal, have climbed about 13 per cent over the past year but remain below the highs of July 2018.

The losses from the NYSE Fang-plus index come as some of the most eagerly awaited initial public offerings have disappointed, suggesting investors have grown more reluctant to back companies without a clear path to profitability. Shares in Lyft are languishing at about half their listing price, while Uber has lost more than a third of its market value since its May debut.

Office space provider WeWork pulled its listing last month while shares in Peloton, the home fitness company, are trading about a fifth below their offer price last week.

Jim Carney, chief executive officer of Parplus Partners, a hedge fund, noted that returns from the Faang stocks were bound to fade because they had reached a high level of maturity, with Apple touching a trillion-dollar valuation last year.

“You can’t grow at the same level,” Mr Carney said. “They’re in a new phase — now we will start to see these companies act like normal stocks.”