Residents of a wealthy suburb on the “gold coast” of Lake Zurich were rudely awakened on Wednesday morning, when a huge crane mounted on a six-wheeled truck started unloading building blocks.

The delivery went to the house of Iqbal Khan, until recently the head of wealth management at Credit Suisse.

Among the neighbours whose cars were blocked by the crane happened to be Tidjane Thiam, chief executive at the same Swiss bank, who was trying to get to the airport.

It was only the latest source of tension between the two men in a feud that has gripped Switzerland.

On September 20, it emerged that Credit Suisse had hired a private investigator to follow Mr Khan, who was defecting to the bank’s arch-rival UBS. Mr Khan spotted his stalkers and tried to lose them during a car chase, before confronting them on the street.

The affair took a darker turn days later when a security contractor who employed the investigator on the bank’s behalf died by suicide.

The Financial Times has spoken to 10 people close to the acrimonious relationship to chronicle a dispute that had tragic consequences, damaged Credit Suisse’s reputation and made headlines around the world. Both men and both banks declined to comment.

Shareholders didn’t want Tidjane to go, but someone had to pay for the mess

Mr Khan, a former consultant at EY, rose quickly through the ranks at Credit Suisse after joining in 2013. Two years later, he was entrusted to run the international wealth management unit, which Mr Thiam had made the cornerstone of his turnround strategy.

Mr Khan delivered. During his tenure, profit at the unit increased about 80 per cent and he helped bring in more than $46bn of net new assets between 2016 and 2018. In happier times, Mr Thiam referred to him as “a star”.

But soon the brash and ambitious Mr Khan felt increasingly under-appreciated, frustrated by his profile within the bank, his lack of public appearances and scant assurances about his potential to succeed Mr Thiam.

He also lobbied unsuccessfully for more capital to be allocated to his unit and suggested that Asia wealth management — a cash cow that sat in a different division — should be added to his empire.

At home, the relationship between the two men was unravelling. Their animosity stemmed in large part from their neighbourhood dispute, which began after the junior executive moved in to the house next door and started renovating it. The pair quarrelled over Mr Khan’s lengthy construction project and obtrusive trees in Mr Thiam’s garden.

In early January, against the tense backdrop of more than two years of noisy construction work, things almost came to blows at a neighbourhood cocktail party hosted by Mr Thiam.

Mr Khan had an argument with Mr Thiam’s partner about two tall pine trees she said were planted to protect their privacy from new windows he had installed. Mr Khan claimed they blocked his view of the lake.

Mr Thiam asked to speak to Mr Khan in private and threatened to “take him outside” unless he apologised. The men had to be separated.

“[It] seemed to have been a heated discussion. Their accounts differed,” Credit Suisse chairman Urs Rohner said at a press conference earlier this week, adding that he had hoped the pair would be able to put their differences aside and continue working together.

“However, with time it became evident a long-term collaboration was not possible and . . . Mr Khan wanted to leave,” he said.

In February, Mr Khan felt passed over in an internal reorganisation and became progressively more withdrawn and taciturn at work. In meetings, he would participate little, instead leaning back on his chair and folding his arms, according to people in attendance.

“He would just sort of sulk, to the point where we would ask him what was the matter,” one executive recalled. 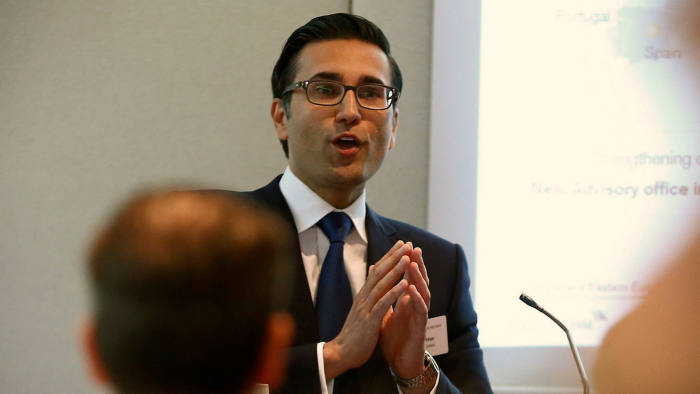 During Iqbal Khan’s tenure, profit at the international wealth management unit increased about 80 per cent © Reuters

Mr Khan finally quit on July 1. In the statement announcing his departure, Mr Thiam pointedly stressed he was responsible for the rapid rise of his junior: “I identified Iqbal Khan as a great candidate for the job.”

Mr Khan negotiated an unusually favourable exit package. He was only required to give a three-month notice period compared with the usual six months — plus a stint of gardening leave lasting up to a year — designed to reduce the risk of leavers poaching colleagues and clients.

The cocktail party confrontation led to the special dispensation. This week, Mr Rohner admitted he “helped broker a mutually beneficial termination agreement with Mr Khan” to try to smooth things over.

Mr Khan had for months been quietly meeting with rivals including Julius Baer and UBS and it had got back to Credit Suisse that he had discussed a “wish list” of co-workers he wanted to eventually recruit.

By the time Mr Khan returned from a family holiday at the end of August he had spurned the chief executive role at Julius Baer and signed with UBS, who unveiled him as a co-head of its $2.5tn wealth management unit.

At this point COO Mr Bouée “considered the risk of Mr Khan breaching his contractual obligations had changed from hypothesis to reality and initiated the observation”, according to John Tiner, the Credit Suisse director who oversaw the bank’s investigation of the matter.

Mr Bouée and his head of security, Mr Boccali, hired a security contractor to catch Mr Khan in the act. He, in turn, enlisted a small private investigations company called Investigo to tail the banker.

Based in a nondescript industrial estate in Otelfingen 25 minutes from Zurich, Investigo is more skilled at digging out benefit fraudsters, collecting debts and providing personal protection than corporate espionage.

An August job advert for the company sought male candidates between the ages of 22 and 50, that were “flexible, sporty and highly reliable” and “physically in good shape”.

A rival bank chief executive said it was highly unusual that Credit Suisse had requested private spies to physically tail Mr Khan. Poaching investigations are usually assigned to big-name corporate-intelligence companies such as Kroll, and limited to a trawl of emails and phone records, he said.

Investigo’s operatives were clumsy and got caught. On Tuesday, September 17 after dropping his son at football practice, Mr Khan realised he and his wife were being tailed by one or more men in a car.

Mr Khan stopped his car outside the Metropole restaurant and noisily confronted the men, before reporting the matter to the police, prompting Zurich’s cantonal prosecutor to start investigating.

Credit Suisse’s board said this is when it found out about the surveillance. Later that week a Swiss blog called Inside ParadePlatz broke the news that police had arrested several people.

The bank hired law firm Homburger to conduct an investigation, focusing on Mr Bouée because he signed off on the surveillance.

After lurid details became public, Credit Suisse’s biggest investors quickly defended the bank and its chief executive. David Herro, deputy chairman of Harris Associates, the largest shareholder, said: “Unless laws have been broken, [it] doesn’t seem like a case for anyone losing their job.” On Thursday, September 26 he flew to Zurich to support Mr Thiam. 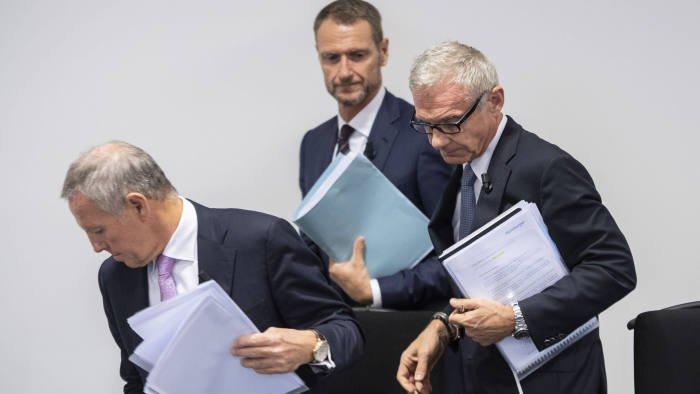 At 8am last Tuesday, a pallid and exhausted Mr Rohner took to the stage at a hastily-arranged press conference in an auditorium less than half a kilometre away from the site where Mr Khan faced his pursuers.

Mr Thiam was exonerated by the probe — comprised of 14 interviews with Credit Suisse staff, Mr Khan and Investigo, and reviews of emails and messages — which found no evidence he was aware of the surveillance.

Similarly, there was no proof that Mr Khan attempted to steal clients or staff while on gardening leave, but “he continued to socialise with certain key employees”, according to the report.

Even now, not all investors were as supportive as Mr Herro. One of the bank’s largest shareholders said he was surprised by the lack of further departures, adding the chairman and chief executive still have questions to answer.

While Mr Thiam appears to have weathered the immediate storm, the news for Mr Bouée was not so good. The week before, on Tuesday September 24, the third party contractor who hired Investigo was found dead in an apparent suicide.

Before news of the suicide broke, Mr Bouée had hoped to keep his job but his position became untenable after the tragedy was reported in the media, said two people involved.

“The suicide played a role, yes,” one person close to Mr Thiam said, referring to Pierre-Olivier Bouée’s by his longstanding nickname, POB. “POB is an unnecessary casualty. To lose him over Iqbal is devastating.”

Mr Thiam, 57, a former Côte d’Ivoire government minister, met Mr Bouée at the turn of the century when both were consultants at McKinsey. When Mr Thiam moved to Aviva in 2002 he brought across his friend two years later. Mr Bouée then followed his boss to Prudential in 2008 and Credit Suisse in 2015.

A top-20 shareholder described Mr Bouée as the “fall guy”. The investor added: “Shareholders didn’t want Tidjane to go, but someone had to pay for the mess. Tidjane has looked after POB for 20 years and now he’s fallen on his sword.”

Things have worked out better for the 43-year-old Mr Khan, who is now a top candidate to be the next UBS chief executive, one of the most powerful positions in global finance and Swiss society.

As part of his deal with Mr Rohner, he left Credit Suisse with a $2m payout and the $4m to $5m of deferred pay he forfeited was picked up by UBS, people familiar with the terms said. He has a major house renovation to pay for.