As the Dongfeng 41 — a new Chinese missile capable of delivering 10 nuclear warheads to anywhere in the US — rumbled along Beijing’s main avenue this week in China’s biggest ever military parade, Hu Xijin did not attempt to conceal his glee. “Don’t mess . . . with the Chinese people or intimidate them,” tweeted Mr Hu, editor of the popular state-owned tabloid, Global Times, which often articulates the feelings of senior officials.

Just hours later in Hong Kong, which returned to China’s rule in 1997, a very different scene played out. Hundreds of thousands of pro-democracy protesters thronged the streets, some clashing violently with police. In one location, a crowd gathered to throw eggs at a portrait of Xi Jinping, the powerful Chinese leader who led the parade in Beijing. Every time an egg hit Mr Xi’s face, a cheer surged up from the crowd.

Such were the polarised narratives that vied to define China on the 70th anniversary of Communist party rule this week. But how should the world read them? Was Mr Xi’s missile-packed pageantry indicative of an emerging superpower or a brittle, paranoid regime? Are the demonstrations in Hong Kong a last redoubt for democratic aspirations on Chinese soil or the start of something new? What are the implications of Beijing’s assertiveness for the wider world?

These are big questions at a time when the creed of western liberalism that has held sway over global affairs since the second world war is in retreat. For some, China’s advancing power represents an attractive alternative to the struggling west, a model of state-capitalist poise. But to others — especially in the west and Beijing’s immediate neighbours — China’s vision and influence is to be challenged, resisted or balanced. 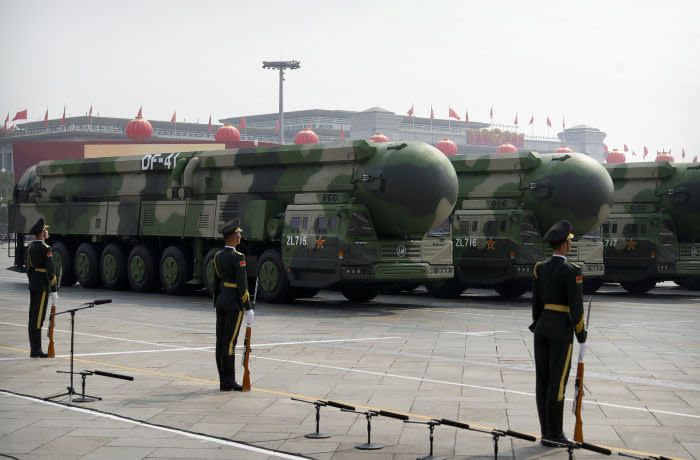 In the absence of direct elections, the popularity of authoritarian regimes is hard to gauge. But the outpourings of pride on Chinese social media this week suggested that Mr Xi’s parade was a genuine hit with ordinary Chinese.

“Most Chinese viewed the parade with enormous pride and euphoria,” says Yu Jie, senior China research fellow at Chatham House, a UK think-tank. “It is not just that the Communist party told them to celebrate but rather that most parts of the population willingly celebrated their own staggering success through hard work and resilience over a span of just 70 years.”

In a government report called “China and the World in a New Era”released in the run-up to the anniversary, Beijing did not underplay its progress. “In just a few decades, China has completed a course that took developed countries several hundred years,” it said.

The report set forth key aspects of China’s transformation: the country’s annual gross domestic product growth rate averaged 8.1 per cent between 1952 and 2018; some 770m people living in rural China have been raised from poverty since 1978; and life expectancy has risen from 35 in 1949 to 77 today. More than $2tn in foreign direct investment entered over the past 40 years.

In an important regard, China’s success seems to stand as an advertisement for authoritarianism. Ruchir Sharma, chief global strategist at Morgan Stanley, has found that since 1950 there have been 43 cases in which an economy grew at an average annual rate of 7 per cent or more for a full decade. A full 35 of these booms — or 81 per cent — took place under an authoritarian government.

The story does not end there. Mr Sharma also found that over a longer timeframe, autocracies tended to lose their way either through sudden policy reversals or the leaden hand of the state. 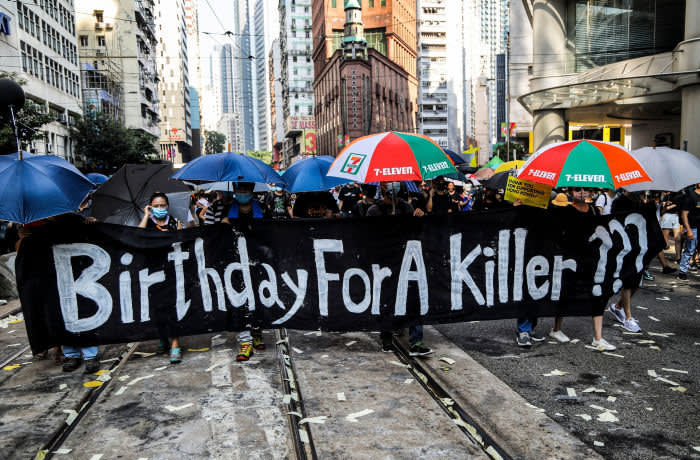 Hong Kong, where authorities invoked emergency powers against the demonstrators on Friday © EPA

“The stabilising effect of democracy . . . accounts for a simple fact: every large economy that has seen average per capita income grow to more than $10,000 is a democracy,” says Mr Sharma. “China, with an average income approaching $10,000, is trying to become a large, rich autocracy but it would be the first.”

Beijing has no intention of abandoning its political model. “Due to China’s vast territory and complicated national conditions, the governance of China is uniquely difficult,” said the government report. “Without centralised, unified and firm leadership, China would have tended toward division and disintegration and caused widespread chaos beyond its own borders.”

This leaves China aiming at an unprecedented goal; a durably successful autocracy. But some scholars do not bet against it. Jean-Pierre Cabestan, for one, describes in a recent book, China Tomorrow, how Beijing is building a “new authoritarian equilibrium” that could sustain its dictatorship for decades to come.

All this explains why Hong Kong, where authorities invoked emergency powers against the demonstrators on Friday, is so crucial. It shows the limits to China’s autocratic vision.

“Hong Kong is another data point illustrating the same troubling trend of a government that believes might is right and is totally dismissive of the enormous risks and potentially catastrophic consequences of its actions,” says Minxin Pei, professor at Claremont McKenna College in the US.

Hong Kong illustrates how trying to impose elements of China’s “centralised, unified and firm” system upon a cosmopolitan population with an average per capita income of $39,000 — four times more than the mainland’s average — can create a powerful backlash. 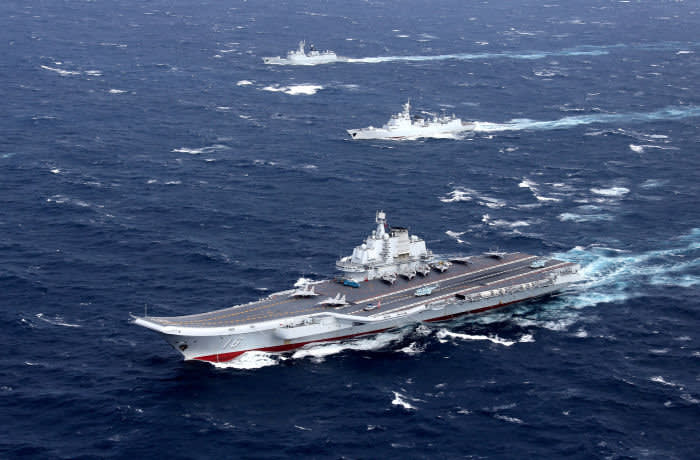 The animosity is deep and sometimes personal. Protesters have made posters likening Beijing to a Nazi regime, burnt the Chinese flag and defaced images of Mr Xi. In one frequent protester taunt, mainlanders are described as “caged birds” too scared to emerge from behind their bars.

The current cycle of protests, which have lasted four months, is heir to the “Occupy Movement” of 2014. Then Hong Kong people took to the streets against Beijing’s attempts to curtail democratic freedoms protected under the “one country, two systems” formula through which Beijing reassumed control over Hong Kong in 1997.

But Beijing is finding that Hong Kong is not the only place to where repression does not travel. Voters on the island of Taiwan — which Beijing pledges to take back before 2049 as part of its plan for the “great rejuvenation of the Chinese nation” — have also been alienated by the mainland’s assertiveness. Recent opinion polls have shown strong support for pro-independence candidates in next year’s presidential elections.

In the west and the rest of Asia too, China’s approval ratings have tanked. A survey conducted by the Pew Research Center this summer found that in the US, 60 per cent of people have an “unfavourable” view of China, up from 47 per cent in 2018. In Japan and South Korea the “unfavourable” rating was 85 per cent and 63 per cent, respectively.

The US is particularly unambiguous in its official attitude. Having spent nearly 40 years pursuing a policy of engagement with Beijing, the Trump administration is now set upon decoupling — cutting ties in diplomacy, commerce, education and increasingly in finance too. The main reasons for this, say senior US officials, include the theft of intellectual property, unfair investment practises, state-sponsored cyber-hacking and human rights abuses in the Chinese regions of Xinjiang and Tibet.

“The nature of the regime should be clear by its actions in Hong Kong, Xinjiang and Tibet,” says Brigadier General Robert Spalding, a former senior official in the Trump administration’s National Security Council. “It is a totalitarian dictatorship bent on spreading its vision of IT-based social control as a means of securing the Chinese Communist party’s continued rule.” 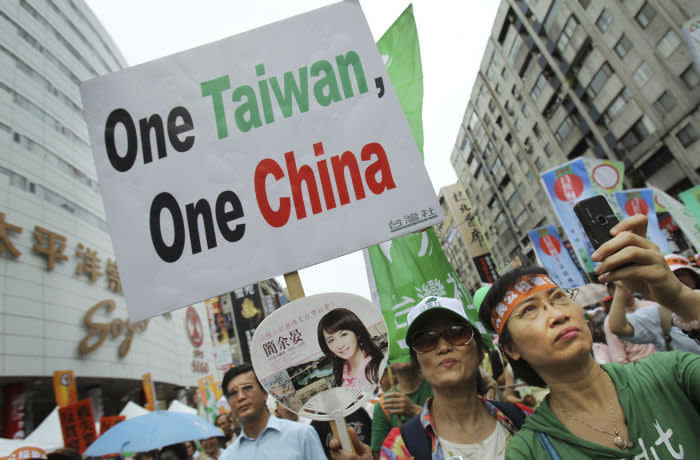 Voters in Taiwan, which Beijing pledges to take back before 2049, have been alienated by mainland’s assertiveness © AP

The US is also seeking to influence allies in the west to steer clear of certain Chinese technologies. The UK, for instance, is under pressure to eject Huawei, China’s leading telecoms company, from its 5G network.

The South China Sea is another arena of rising anxiety. At least seven Chinese ships have entered Vietnam’s “exclusive economic zone” in recent months to conduct what appear to be oil and gas surveys of the area. Given that Beijing claims almost the entire area of the 1.4m square mile (3.5m square km) sea, its unilateral actions unsettled not only rival claimants to disputed waters but also nations that use its crucial shipping lanes.

Such statements underline the symbolic importance of Mr Xi and his performance at the military parade. Though he set out the narrative of China’s epic struggle against poverty and oppression over the past 70 years, there was one particular debt that he did not acknowledge: that to the west.

For China’s rise, at least in its early decades, was enabled by the policy of engagement adopted by the US, Europe and other nations. They opened their markets to Chinese goods, made their investments in China’s “special economic zones”, transferred knowledge, skills and intellectual property. But this aspect of China’s recent history is no longer mentioned.

Instead, there is a tough, uncompromising message to the world. In his speech on Tiananmen Gate — the hallowed spot once occupied by Mao Zedong as he proclaimed the new China in 1949, Mr Xi warned: “There is no force that can shake the status of this great nation. No force can stop the Chinese people and the Chinese nation forging ahead”.