Donald Trump has urged China to investigate Joe Biden, the former vice-president, blatantly encouraging a foreign nation to interfere in the 2020 presidential election even as Democrats pursue an impeachment inquiry into similar requests to Ukraine.

The call for China to investigate Mr Biden and his son Hunter comes as US negotiators continue talks with Beijing on ending the trade war between the two countries.

Mr Trump has asked several world leaders for help — either to investigate the Bidens or to assist a review of the Russia investigation that he frequently called a “witch hunt”.

Asked on Thursday if he had asked Xi Jinping, China’s president, to probe the Bidens, Mr Trump replied: “I haven’t, but it’s certainly something we can start thinking about.”

Mr Trump was speaking as the Democrat-controlled House of Representatives moved ahead with an impeachment investigation into his call with Mr Zelensky, in which Mr Trump asked his counterpart to investigate Mr Biden and his son Hunter.

Mr Trump and his supporters have alleged — without providing evidence — that Mr Biden pressured Ukraine to fire its top prosecutor to stop an investigation into a Ukrainian gas company, Burisma, where Hunter Biden was once a board member.

The July call is central to the whistleblower complaint that sparked the impeachment investigation. It came a week after Mr Trump ordered his staff to withhold almost $400m in congressionally approved military aid to Ukraine to help it counter Russia.

Mr Trump and his personal lawyer, Rudy Giuliani, have pushed unfounded theories that Mr Biden, while serving as Barack Obama’s vice-president, helped his son do business in Ukraine and China. After the release of the whistleblower report, Mr Trump has doubled down on the claims to deflect attention from the accusations he faces.

The Biden campaign said the president’s latest action underscored that “the defining characteristic of Donald Trump’s presidency is the ongoing abuse of power”.

“What Donald Trump just said on the South Lawn of the White House [about China] was this election’s equivalent of his infamous ‘Russia, if you’re listening’ moment from 2016,” said Kate Bedingfield, deputy campaign manager.

In the 2016 race, Mr Trump appeared to prod Russia to interfere in the election by urging it to locate thousands of emails that Hillary Clinton, his Democratic opponent, had deleted from the private server she used while working as US secretary of state.

Responding on Twitter later on Thursday, Mrs Clinton said: “Someone should inform the president that impeachable offences committed on national television still count.”

Elizabeth Warren, one of the frontrunners for the Democratic presidential nomination, chimed in, saying that if Mr Trump thought that “openly committing the same crime will convince people his secret calls weren’t illegal — he’s wrong”.

As he prepared to board his Marine One helicopter on Thursday, Mr Trump repeated his call for Mr Zelensky to probe the Bidens — a move critics say is an inappropriate use of his office for personal gain, since Mr Biden could be his Democratic challenger in 2020.

“I would say President Zelensky, I would recommend they start an investigation into the Bidens,” Mr Trump said.

While Mr Trump alleges the Democrats are covering up corruption involving Mr Biden, his public comments will provide more evidence to investigators examining whether he is inappropriately using his office as he gears up for his 2020 re-election fight.

“The president cannot use the power of his office to pressure foreign leaders to investigate his political opponents,” said Adam Schiff, the Democratic head of the House intelligence committee. “America is a republic, if we can keep it.”

Many experts believe the House will pass articles of impeachment against Mr Trump, paving the way for a trial in the Republican-controlled Senate. Mr Trump is banking on the fact that at least 20 Republicans would have to vote against him for a conviction.

The Financial Times contacted all 53 Republican senators on Thursday to ask if they were concerned that Mr Trump had encouraged China, a US adversary, to investigate the Bidens. While some were unavailable for comment due to their travel schedules, not one of the members responded via their staff to express any concern.

Nick Burns, a former top US diplomat who backs Mr Biden for president, told CNN that Mr Trump should be disqualified from office based on his open request to China.

“It’s an open invitation to the government of China,” Mr Burns said. 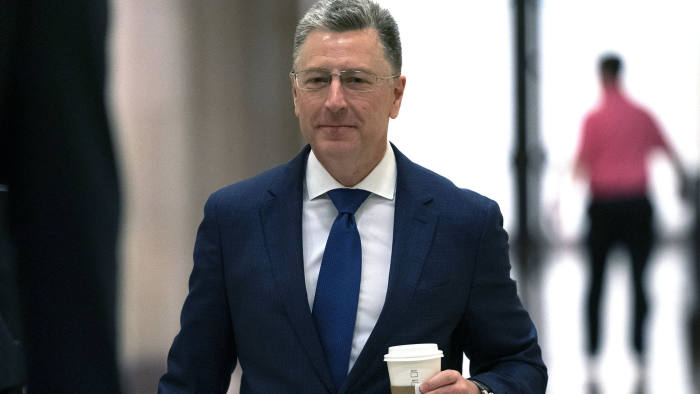 Kurt Volker, a former special envoy to Ukraine, arrives for a closed-door interview with House investigators on Thursday © AP

While Mr Trump spoke, Kurt Volker, the former US special envoy to Ukraine who resigned last week after his name was associated with Mr Giuliani’s efforts to probe the Bidens, was being deposed by lawmakers leading the impeachment inquiry.

The House is next week expected to hear from Marie Yovanovitch, the former US ambassador to Ukraine, who was recalled earlier than expected for reasons that critics allege were political. Asked on Thursday why the US had recalled the ambassador, Mr Trump replied that he had “heard very bad things about her”.

On Friday, Michael Atkinson, the US intelligence community inspector-general — an internal watchdog — will meet lawmakers to discuss the Ukrainegate scandal.