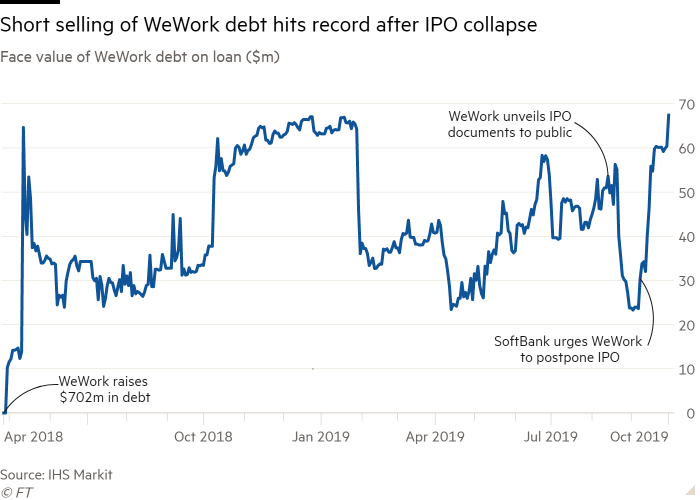 Investors have placed a record level of bets against WeWork’s bonds since the lossmaking property group abandoned its initial public offering and its credit rating was slashed deep into junk territory.

More than $67m of the company’s $669m of corporate debt was on loan, according to data provider IHS Markit. This is a proxy for “short positioning” in the bond, where investors profit if the price of the debt declines.

WeWork’s bonds, which mature in 2025, have fallen dramatically in recent weeks. The debt traded hands for less than 85 cents on the dollar on Wednesday, a record low. That was down sharply from a high of 105 cents on the dollar after WeWork made public its IPO plans in August. By Thursday morning, they had edged just above 85 cents.

“It makes sense as a ‘pile on’ trade,” said John McClain, a portfolio manager at Diamond Hill Capital Management. “All the sentiment, all the headlines have been bad. It’s led to a feasting on a failed unicorn.”

WeWork’s bonds now offer a nearly 12 per cent yield to maturity, just short of the average yield on a Credit Suisse index of triple C-rated high-yield debt. On Tuesday, Fitch Ratings had cut WeWork’s credit rating by two notches to triple C plus with a negative outlook. Under Fitch’s definition of triple C, bonds carry “substantial credit risk” and default is seen as “a real possibility”.

Short sellers borrow debt — often from banks — for a fee and then sell it into the market. If the bond price declines, they are then able to buy the bond back at a lower price. The short seller then returns the bond to the bank, pocketing the difference between their purchase and sale prices.

Sam Pierson, a director in IHS Markit’s securities lending division, noted that the cost to borrow WeWork debt to short had skyrocketed and that it was now among the most expensive bonds to short in the $9.5tn US corporate debt market. 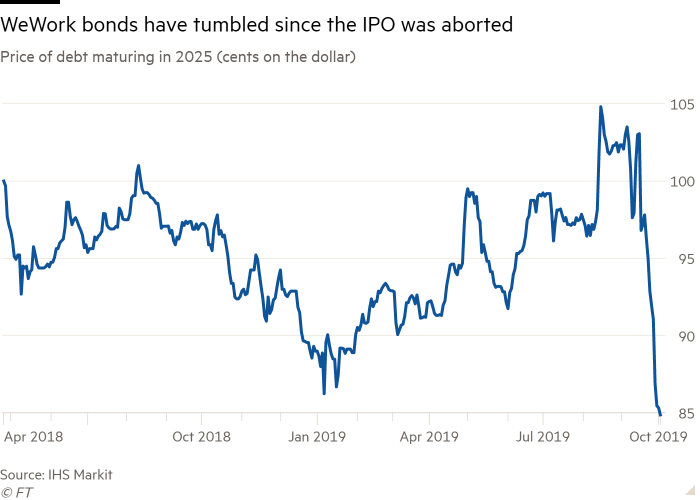 More than 10 per cent of WeWork’s debt was now on loan, according to the IHS Markit data, eclipsing a period last year when the company was expected to win new financing from SoftBank, news that drew a large number of short sellers into the debt. The company earlier this year repurchased $33m of the $702m bond, according to filings with US securities regulators.

WeWork has been in turmoil since it pulled the plug on its hotly anticipated IPO last month and co-founder and chief executive Adam Neumann stepped down from his role at the head of the company. Institutional investors have raised serious concerns over the company’s business model, Mr Neumann’s sway over the company and his share sales.

The two executives installed to take up his post — Artie Minson and Sebastian Gunningham — are now at work to secure a new financial lifeline for the office space provider.

The company had planned to raise at least $3bn in its now-aborted listing and a further $6bn through a loan from a consortium of banks led by JPMorgan Chase and Goldman Sachs. But that debt package was contingent on the IPO, and WeWork parent the We Company is now negotiating a far smaller loan from the group of banks, according to people briefed on the matter.

In a bid to solidify its finances, WeWork is considering selling off companies that it has recently acquired, including Managed by Q, Meetup, Conductor, SpaceIQ and Teem, as well as its stake in The Wing.

It has also dramatically slowed its pace of new lease signings, and last week temporarily halted the signing of new property contracts. The company has burnt through capital as it has expanded from its founding in a single office in New York’s SoHo district to more than 500 locations.

Credit-rating agencies have swiftly cut their views of the company and warned creditors of the stresses on WeWork’s balance sheet. Analysts at Fitch warned it was likely WeWork had $1.5bn of cash at the end of the third quarter, down $1bn from the end of June, and that it faced “material restructuring cash charges”. The company is expected to lay off thousands of its employees in the coming weeks.