China’s Baidu is betting that the smart speaker will be the next smartphone.

The Chinese technology company believes that after the move to mobile, the next major shift for its core search business will be to voice, according to Baidu’s vice-president for smart devices Jing Kun.

“The early signs are that when these devices enter people’s homes they become the core of that home,” Mr Jing said in an interview. “That is why all the leading [Chinese technology] companies are making smart speakers.”

This belief that smart speakers will soon move from being niche gadgets to a central and indispensable hub for millions of Chinese families has set off intense competition among China’s big technology conglomerates.

But it is Baidu which has taken the lead, despite only launching a low-cost smart speaker in April last year. In the second quarter it overtook not only Alibaba but also Google, to sell the second most smart speakers globally after Amazon.

Overall China sales have also overtaken those in the US and in the next quarter, more than twice as many smart speakers could be sold in China, some 12.6m, than in the US, according to research firm Canalys. 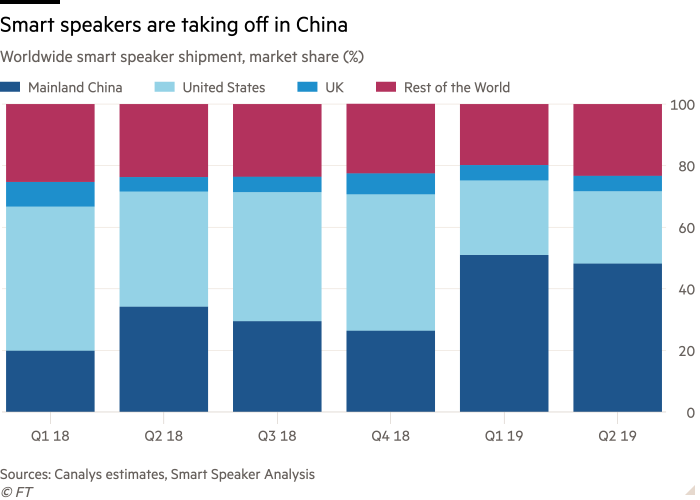 The surge in sales has been driven in part by low prices. Alibaba, Baidu and smartphone maker Xiaomi, China’s top three smart speaker manufacturers, all subsidise their speakers, with the cheapest devices being priced at around 99 yuan ($14).

For Baidu, there is much to gain. The company has struggled to adapt to mobile and has fallen behind Alibaba and Tencent in the grouping of China’s top technology companies often referred to as “BAT” as it searches for new profits from new artificial intelligence-powered ventures.

Smart speakers are a relatively small, but growing, portion of its sales. Revenues for the division that includes smart speakers grew by 44 per cent to Rmb7.1bn ($1.04 billion) out of total of Rmb26.3bn, while costs for the same were up 89 per cent to Rmb4.8bn ($703m).

While previous subsidy wars for Chinese market dominance in new technological fads such as bike sharing have landed companies with crippling debts when bubbles burst, analysts are more sanguine about the prospects for smart devices.

“For us, this fight is something that we have to win, because this is the future of search, so we have been determined in our investment,” Baidu’s Mr Jing said.

The company is planning to gradually reduce the amount it subsidises devices and is experimenting with monetising models, mainly subscriptions for video, music, education and gaming content.

The speakers have already “crossed the chasm,” Mr Jing said, to become commercially viable products, because of their stickiness — they are used an average of 20 to 30 times a day for around two hours in total. 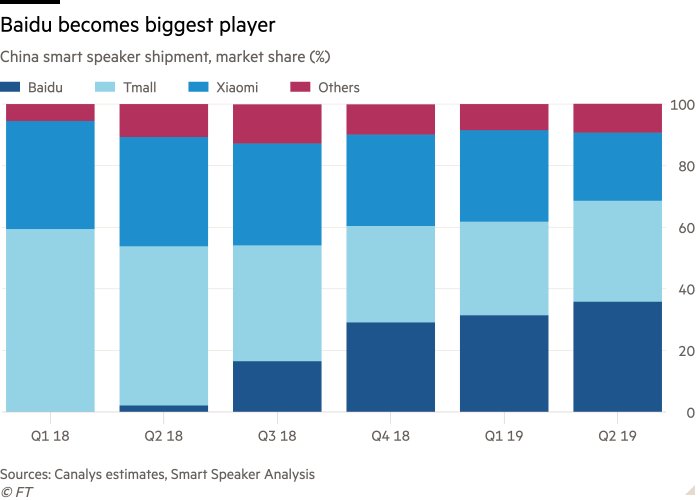 A September 2018 survey by research firm Nielsen found that Amazon Echo and Google Home users spend on average 72 minutes per day on their devices on the weekend, and 65 minutes during the week.

This additional time spent on the devices is in part thanks to their surprise popularity in China’s smaller cities, where people often have more spare time and buyer tend to treat devices as a cheaper alternative to a television or a sound system, Mr Jing said, although the company does not release regional breakdowns of sales data.

Users, like those in other countries, mostly rely on the devices for playing music, but China’s tech leaders are experimenting with adding additional functions, each playing to their individual ecosystems in an attempt to gain an advantage over rivals.

Alibaba, previously the leader in China before Baidu’s recent success, has also integrated screens and cameras to enable the devices to be used as phones or for providing remote services such as medical consultation, fitness training or language classes.

Xiaomi promotes its speakers as a command hub alongside its extensive range of other smart home devices, from projectors and fridges to air purifiers and vacuums.

Some of the rivalry to develop viable voice assistant businesses is taking place beyond smart speakers, with companies developing other channels for users to become accustomed to speaking to their devices.

Tencent’s Tingting smart speaker has sold only a tiny fraction of the number of smart speakers of Baidu, Alibaba and Xiaomi, but the company is trialing a voice assistant function for the over 1bn users of its WeChat messaging app.

Tencent has also partnered with automaker Changan Auto to include its platform in some models, while Baidu has a partnership with Geely to include its DuerOS voice assistant system in Boyue Pro models.

Baidu has been developing its content offerings via its video streaming subsidy iQiyi and also has the largest number of developer partners, as well as an advantage in providing news and answering queries due to its dominance in search, analysts said.

All these initiatives remain a way from being a major revenue source, however. “The market is still in a phase of educating, cultivating habits and trying to reach as many users as possible,” Beijing-based IDC researcher Sophie Pan said.

Using advertising is a no-go for voice assistant devices at this stage, because it has a major impact on user experience and damages adoption rates, Jason Low, a Shanghai-based analyst for Canalys, said.

Companies are struggling to move from subsidising to monetising the devices and “the revenue model is so far unclear. It’s a big challenge,” Mr Low said.