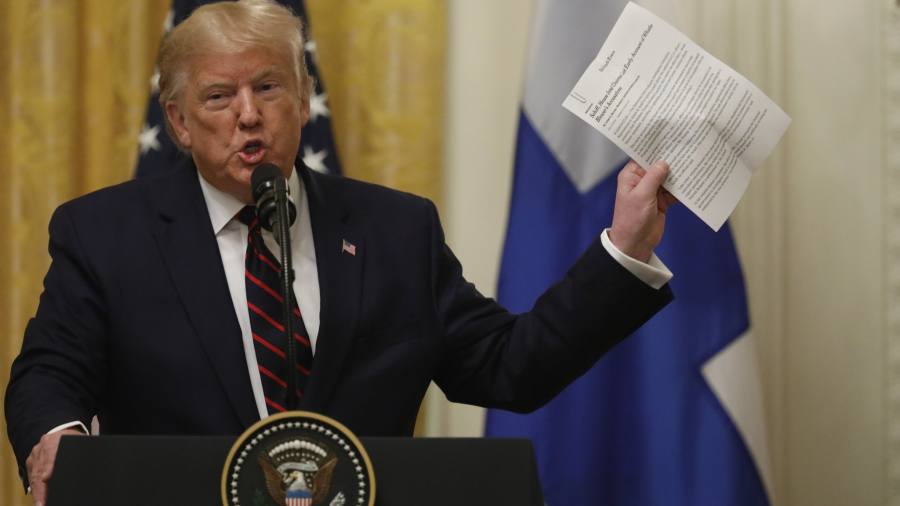 It is widely acknowledged that Donald Trump often accuses others of what he himself is guilty. Psychologists call this projection. The most common example is “fake news” — a term Mr Trump deploys against others with about the same frequency as he creates his own. The tendency to project one’s faults is a form of self-defence. It is more comforting to believe you are surrounded by liars and cheats than the alternative.

That is especially true for a US president facing impeachment for high crimes and misdemeanours. Mr Trump claims his Democratic accusers, and the deep state, are launching a coup against his presidency. In so doing, he is inverting the meaning of coup d’état, which is an illegal overthrow of a government, generally by violent means. Mr Trump faces no such threat. The right to impeach is embedded in the US constitution. It is a gradual process with no certain outcome.

Today’s reality allows for another kind of putsch — the “soft coup” carried out by civilian stealth rather than tanks in the streets. The days of army chiefs storming palaces are over. Almost every 21st-century regime change has taken place while keeping the trappings of electoral democracy. Hungary’s Viktor Orban and Russia’s Vladimir Putin are good examples of leaders turning party democracies into de-facto authoritarian regimes. With fewer levers at his disposal, Mr Trump is trying to pull off an American version.

His chief project is to investigate the investigators. As impeachment gathers pace, Mr Trump is sending cabinet officials abroad to hunt for material that could implicate the US federal government in a plot against him. His idea is that the rest of the west connived with America’s deep state to help Hillary Clinton’s campaign in 2016. After she lost, they supported an FBI probe into fake allegations that Mr Trump’s campaign colluded with Russia. Principals such as Mike Pompeo, the US secretary of state, and Bill Barr, the US attorney-general, have been enlisted. Mr Trump is marshalling his administration in a worldwide pursuit of a fringe internet conspiracy theory.

Few foreign governments would accept that their intelligence agencies plotted with the CIA and the FBI to hijack US democracy — let alone confess to it. Yet there is method to Mr Trump’s madness. The next time an American intelligence officer detects foreign interference, they will think twice about flagging it. Of course, they could raise the alarm and seek protection. But Mr Trump has made it clear he wants to know the identity of the whistleblower who alerted Congress to the call with his Ukrainian counterpart. How soon before someone in Congress leaks his or her name? Who will protect that person?

Mr Trump’s strategy does not hinge on hard evidence. Simply by declaring his theory to be true — as he was doing months before “Ukrainegate” erupted — he has two advantages. First, his claims are amplified by sympathetic outlets. Mr Trump often expresses envy towards autocrats such as Mr Putin and China’s Xi Jinping. But there is little to distinguish Fox News anchors and Sinclair Broadcast Group from the state-owned broadcasters in Beijing and Moscow. His claims are also spread, albeit more critically, by the non-sympathetic media.

That gives Mr Trump another edge, which is the simplicity of what he is saying. If truth is no barrier, you can paint as garishly as you like. Your opponents have no such luxury. The impeachment inquiry against Mr Trump is neither a coup d’état, nor is it likely to trigger a civil war, as Mr Trump has also suggested. But it does require Americans to keep up with an ever-denser thicket of facts. It is not obvious that a global celebrity with a strange theory will lose to a cast of politicians assembling a rough draft of reality. Americans occasionally envy the parliamentary system. Now is the time to rue the missing leader of the opposition.

In the meantime, Americans should prepare for a golden age of projection. On Wednesday, Mr Trump was asked what he wanted from his Ukraine call. He dismissed the inquiry as a hoax driven by the corrupt media. Those who lied about him were guilty of treason. His verdict leaves no middle ground. Either you believe Mr Trump, or you are corrupt. In an old-fashioned coup, the people kept their heads down. In the 21st-century version, public opinion is key to whether one can succeed.