Donald Trump is facing the most perilous crisis of his tenure after becoming only the fourth US president — after Andrew Johnson, Richard Nixon and Bill Clinton — to face an impeachment inquiry in the House of Representatives.

Over the summer, Mr Trump celebrated the conclusion of the two-year Russia investigation by special counsel Robert Mueller and hit Democrats for pursuing a “witch hunt”, even though he was not exonerated by Mr Mueller.

But Mr Trump has found himself facing a much more dangerous situation over a telephone call on July 25 — the day after Mr Mueller disappointed Democrats with his congressional testimony — with Ukraine’s president, in which Mr Trump urged his counterpart to open an investigation into former vice-president Joe Biden and his son.

Mr Trump has denied any impropriety and rejected suggestions that he withheld hundreds of millions of dollars in military aid to Ukraine in an attempt to pressure president Volodymyr Zelensky into co-operating. 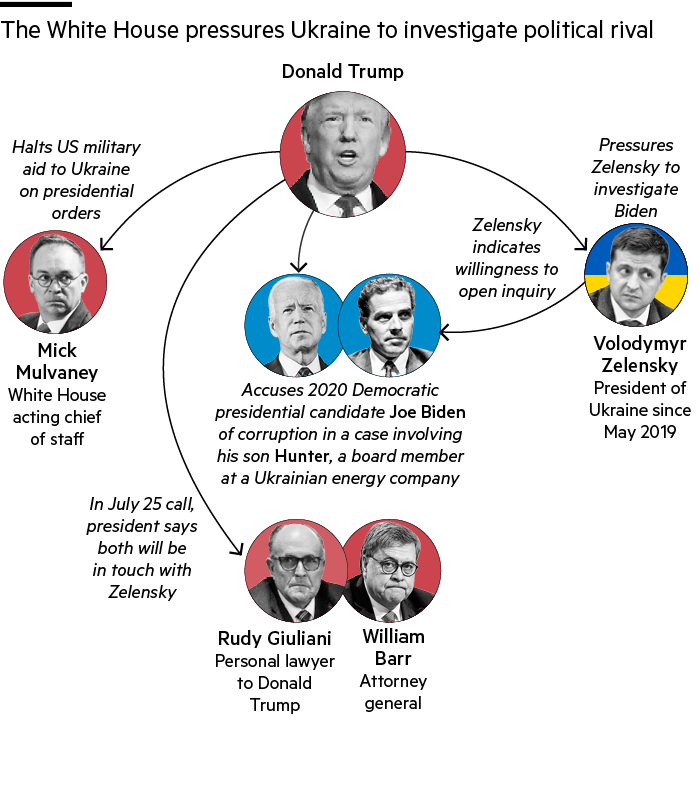 What to watch for:

But a non-verbatim transcript of the call released by the White House and the publication last week of the whistleblower report that sparked the crisis has shown that Mr Trump attempted to use the office of the president for his personal political gain.

Over the next few months, six committees in the Democratically-controlled House will pursue an investigation that many believe will result in the House bringing articles of impeachment against Mr Trump.

While the chances are high that the House would back the charges, Mr Trump is banking on the fact that 20 Republican senators — a large hurdle — would have to abandon the president to result in his conviction in a Senate trial. 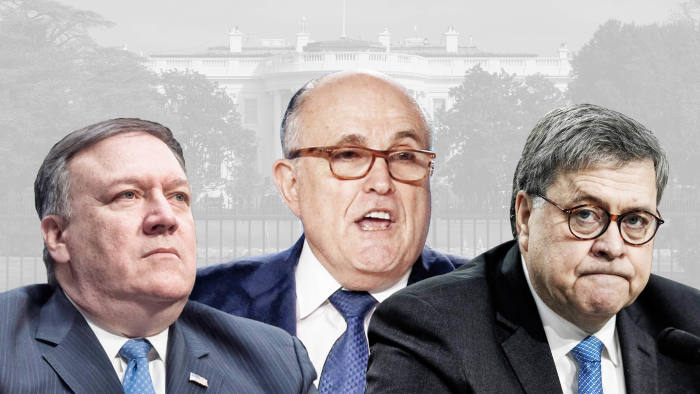 Former US secretary of state

In his time as secretary of state, Mr Pompeo had garnered a reputation for hawkish foreign policy instincts and being extremely loyal to the president.

His state department has now been dragged into the centre of the storm. House Democrats leading the impeachment inquiry have subpoenaed the state department for a broad range of documents linked to their lines of inquiry over Ukraine.

US media has reported that Mr Pompeo was among the administration officials who listened in on the July 25 phone call between Mr Trump and Mr Zelensky.

As Mr Trump’s personal lawyer, the former mayor of New York has taken a central role in the unfolding drama.

The whistleblower complaint describes him as the emissary for the president in his dealings with Ukraine, circumventing the traditional diplomatic channels of the state department and White House.

Mr Giuliani has since claimed that he only spoke directly with the Ukrainians at the behest of the state department.

Earlier this year, Mr Barr was criticised for misrepresenting the findings of special Mr Mueller’s Russia investigation when he said the final report cleared the president of wrongdoing. Mr Mueller himself accused Mr Barr of creating “public confusion” about the findings of the probe.

Since the Ukraine scandal broke, the White House has come under further pressure following reports that Mr Trump had asked Australian prime minister Scott Morrison to help Mr Barr with a review that Mr Trump hoped would discredit the Mueller investigation.

The Washington Post reported that Mr Barr met foreign intelligence officials from the UK, Australia and Italy to gather material for his inquiry. 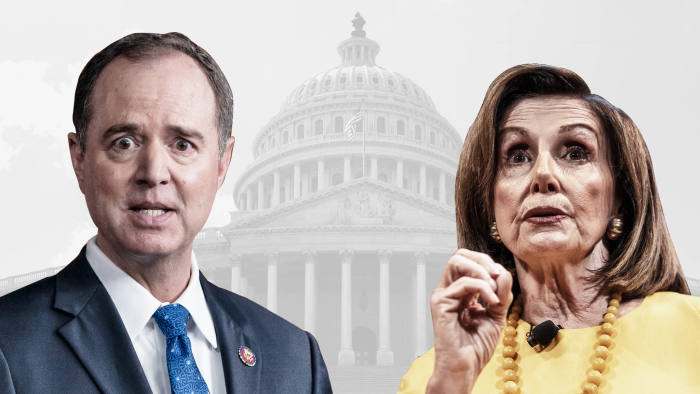 Chairman of the House intelligence committee

As the chairman of the intelligence committee, Mr Schiff will take on a pivotal role in the impeachment investigation as House Democrats look to use their control of key committees to hold Mr Trump to account.

Mr Schiff has already played an important part in moving the whistleblower’s complaint into the public domain and led the questioning of acting director of national intelligence Joseph Maguire on Capitol Hill last week.

As the top Democrat in the House of Representatives, Ms Pelosi announced at the end of September that the House would launch an impeachment inquiry into Mr Trump following the revelations about Mr Trump’s request that Ukraine investigate the Bidens.

The announcement marked a big shift in Ms Pelosi’s political calculus. She had previously argued there was no public appetite for an impeachment inquiry and feared that an inconclusive process could weaken the Democrats as they approached the 2020 election.

When she announced she would launch the impeachment proceedings, Ms Pelosi said the actions of the president had “seriously violated the constitution”, and that Mr Trump should be held accountable. “No one is above the law,” she said. 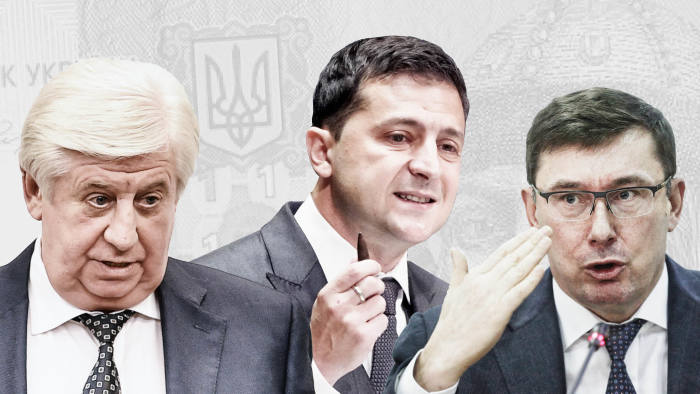 The recently elected ex-comedian has had to strike a tricky balance in his relations with Mr Trump, whose support as leader of the world’s most powerful country is key to fending off aggression from Ukraine’s neighbour, Russia.

As the transcript of the July call released last week reveals, the US president temporarily halted aid to Ukraine before asking Mr Zelensky to probe past activities in Ukraine by Mr Biden, a 2020 presidential contender, while he served as vice-president in the Obama administration. Mr Biden’s son held a board seat at Ukrainian natural gas company Burisma, which has since been investigated for corruption.

In his first face to face meeting with Mr Trump last week on the sidelines of the UN general assembly in New York, Mr Zelensky said “nobody pushed me” to investigate the Bidens, to which Trump interjected: “In other words, no pressure”.

Mr Shokin is a central figure in Mr Trump’s claims of wrongdoing by Mr Biden, his potential rival in next year’s presidential election.

Mr Trump and his associates claim Mr Biden threatened to withhold $1bn in financing to Ukraine while he was vice-president in order to force the ousting of Mr Shokin. Trump’s supporters claim this was because Mr Shokin was investigating Burisma, the Ukrainian gas company where his son held a lucrative board position. Mr Biden has claimed he wanted Mr Shokin fired because he was stonewalling corruption probes.

Mr Shokin has repeated his claims that the Bidens pushed him out in an interview and affidavit. The Bidens have denied wrongdoing.

Mr Lutsenko discussed the Bidens’ activities in Ukraine and alleged wrongdoing with Mr Giuliani on several occasions. Mr Lutsenko was removed from office by Mr Zelensky on the grounds that the prosecutor had allegedly ignored corruption cases.

Mr Lutsenko claims to have told Mr Giuliani that Hunter Biden did not violate Ukrainian law while on the board of Burisma, but that Kiev was ready to co-operate with a US investigation should a request be made.

Mr Lutsenko had previously settled a tax arrears case relating to Burisma on terms critics claim were favourable to the company. Other cases against Burisma are still being probed by Kiev’s anti-corruption bureau. 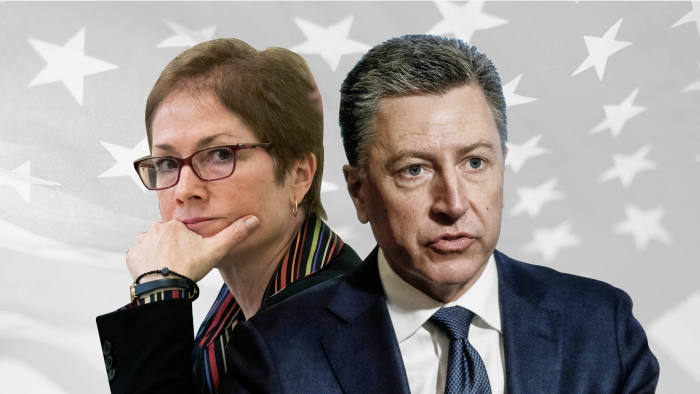 Expected to testify before a congressional committees as part of the impeachment inquiry, Ms Yovanovitch had irked Ukraine’s leadership while she was ambassador for supporting activists and criticising officials for their lacklustre anti-corruption efforts.

She was recalled to Washington several months before her mission was supposed to end. Mr Giuliani has accused her of supporting anti-Trump Ukrainian activists and other political forces. In the White House transcript of the July call, Mr Trump said she was “bad news and the people she was dealing with in the Ukraine were bad news . . .[We] will get to the bottom of it”.

The former envoy to Nato was at the centre of negotiations between Ukraine and Moscow to end a five-year proxy separatist war in Ukraine’s far eastern regions.

Mr Volker was deeply respected in Kiev, not least for his sharp criticism of the Kremlin during the years that MrTrump pursued a close relationship with his Russian counterpart Vladimir Putin. 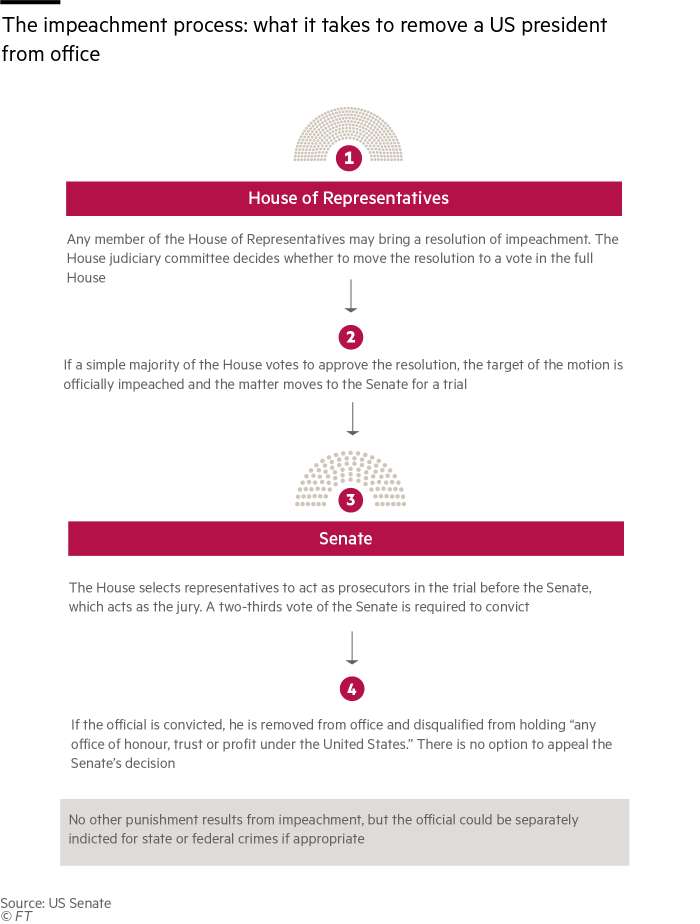 Mr Volker resigned days after the White House phone call transcript with Mr Zelensky was made public. He did not give a reason for his departure.

Mr Giuliani has claimed he engaged with the Ukrainian president’s adviser at Mr Volker’s behest — an unusual request, if true, given that the president’s personal lawyer was not a government official and therefore would not normally be involved in foreign policy.

The story so far:

Rudy Giuliani goes on Fox News and accuses former US vice-president Joe Biden of pushing for the dismissal of a Ukrainian prosecutor who was investigating a company linked to his son.

The Trump administration recalls the US ambassador to Ukraine, Marie Yovanovitch, from her posting, several months ahead of schedule.

Appearing on US news network ABC, Mr Trump says he would accept information on a political rival from a foreign government.

The Washington Post reports that Mr Trump instructed acting White House chief of staff, Mick Mulvaney, to hold back nearly $400m in military aid to Ukraine at least a week before the July 25 call, despite that money having been already approved by Congress.

A recently released transcript reveals that Mr Trump asked Ukraine president Volodymyr Zelensky for a “favour” during a phone call, asking him to look into corruption and to investigate the business dealings of Mr Biden’s son, Hunter Biden.

According to the whistleblower, White House officials were told to move the transcript of the call into an electronic safe usually only used for classified information.

US ambassador to the EU, Gordon Sondland, and US Ukraine envoy Kurt Volker allegedly advise Mr Zelensky on how to navigate Mr Trump’s requests.

Mr Giuliani meets one of Mr Zelensky’s top aides in Madrid to encourage the Ukrainian government to investigate Hunter Biden.

The intelligence community inspector general informs Congress of the existence of a whistleblower complaint. Three House committees — foreign affairs, intelligence and oversight — begin an investigation into whether Mr Trump had been using his position for political gain.

The White House releases military aid to Ukraine that it had been holding back for some months.

Mr Trump admits he did speak about the corruption allegations against Mr Biden in a phone call with Mr Zelensky.

Nancy Pelosi announces the launch of an impeachment inquiry.