Donald Trump said he was the victim of a “coup”, as the US state department watchdog requested an urgent meeting with lawmakers in connection with the impeachment investigation just hours after Mike Pompeo, secretary of state, tried to stall the inquiry.

“I am coming to the conclusion that what is taking place is not an impeachment, it is a COUP, intended to take away the Power of the People, their VOTE, their Freedoms, their Second Amendment, Religion, Military, Border Wall, and their God-given rights as a Citizen of The United States of America!” the president tweeted on Tuesday evening.

The dramatic assertion capped a tumultuous day in Washington as Mr Trump lashed out at the Democrats while several of his officials, including Mr Pompeo and attorney-general William Barr, came under scrutiny about their roles in the burgeoning scandal.

Since entering office in January 2017 Mr Trump has frequently accused the Democrats of pursuing a “witch hunt” and has often claimed that intelligence officials and other career bureaucrats were part of a “deep state” trying to undermine his presidency.

But Mr Trump has become even more assertive on Twitter over the past few days after the release of the whistleblower report which claimed that the president had abused his office for personal gain in trying to get Ukraine to interfere in the 2020 US presidential election by investigating Joe Biden, the former vice-president, and his son. 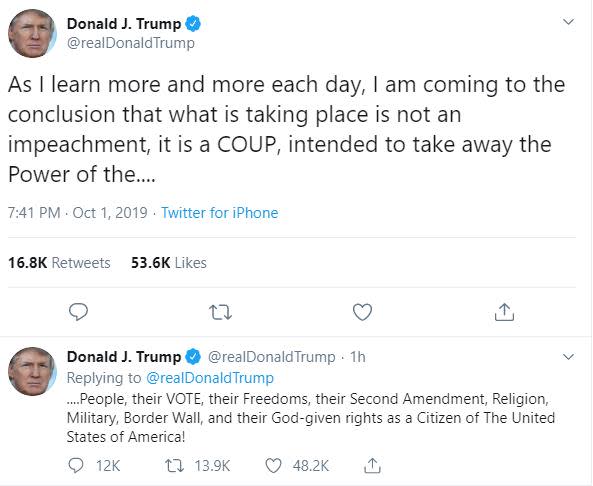 Hours after Mr Pompeo on Tuesday accused Democratic-controlled congressional committees of trying to “bully” state department officials, and hinting that he would try to block their appearances before Congress, Steve Linick, the state department inspector-general, requested an urgent meeting with lawmakers in the House of Representatives and the Senate.

Three people familiar with the situation said Mr Linick would on Wednesday share documents related to Ukraine, which is at the heart of the scandal that has led to Mr Trump becoming only the fourth US president to face an impeachment inquiry.

One person said Mr Linick would meet lawmakers in a special secure facility on Capitol Hill, suggesting that the documents he would bring to Capitol Hill were sensitive.

The impeachment inquiry in the House of Representatives was sparked when a CIA official filed a complaint with the intelligence community’s inspector-general that said White House officials were concerned Mr Trump had abused his office for personal gain in a July 25 call with his Ukrainian counterpart.

Earlier on Tuesday, Mr Pompeo, who was on a trip to Italy, accused Democrats of trying to intimidate state department officials, as he resisted demands for current and former officials to answer questions related to the impeachment inquiry.

Mr Pompeo on Tuesday pushed back against the request in a letter to Eliot Engel, the committee’s Democratic chairman.

“I am concerned with aspects of your request . . . that can be understood only as an attempt to intimidate, bully and treat improperly the distinguished professionals of the Department of State,” he wrote. “I will use all means at my disposal to prevent and expose any attempts to intimidate the dedicated professionals [at the department].”

The main House committees pursuing the impeachment inquiry were scheduled to question Marie Yovanovitch, the former US ambassador to Ukraine, on Thursday, and also Kurt Volker, the former special envoy for Ukraine who resigned last week.

However, following the back and forth between Congress and Mr Pompeo on Tuesday, a new arrangement was reached for Ms Yovanovitch to be deposed late next week.

The state department did not respond to a request for comment about the move by its inspector-general to request an urgent meeting with lawmakers.

In his letter, Mr Pompeo said the current and former officials were not obliged to appear without receiving formal subpoenas. He said there was “no legal basis” for the committees’ threat that failure to appear would amount to obstruction of justice.

The letter came a day after reports Mr Pompeo had listened in real time to the call between Mr Trump and Mr Zelensky. The state department has not denied the claim.

In a whistleblower report released last week, a CIA official said White House officials had “locked down” the transcript of the call due to the likelihood that “they had witnessed the president abuse his office for personal gain” when Mr Trump asked his Ukrainian counterpart to investigate the Bidens.

The committee heads — who included Adam Schiff, head of the intelligence panel, and Elijah Cummings, who leads the oversight panel — told Mr Pompeo that he was now considered a witness in the investigation.

“Secretary Pompeo was reportedly on the call when the president pressed Ukraine to smear his political opponent. If true, Secretary Pompeo is now a fact witness in the House impeachment inquiry,” the three chairs wrote. “He should immediately cease intimidating department witnesses in order to protect himself and the president.”

They added that any effort to intimidate witnesses or prevent them from appearing was “illegal” and would be “evidence of obstruction of the impeachment inquiry”.

Mr Barr has also come under scrutiny in connection with a phone call that Mr Trump held with Scott Morrison, the Australian prime minister, after officials restricted access to the transcript of their conversation.

The New York Times reported that Mr Barr had asked Mr Trump to seek help from Mr Morrison in connection with a review of the Russia investigation overseen by special counsel Robert Mueller, which Mr Trump has repeatedly dismissed as a “witch hunt”.

Over the past week many Republicans have tried to avoid having to answer questions about Mr Trump and Ukraine, while a few have said the issue raised serious concerns.

Writing in The Washington Post, Jeff Flake, a former GOP senator from Arizona and critic of Mr Trump, urged his colleagues to jettison their support for the US president. He said it was time for his peers to risk their career in favour of their principles.