Bernie Sanders, the Vermont senator running for the Democratic presidential nomination, has suspended his campaign after undergoing an emergency heart procedure, a development that could upend the race to challenge Donald Trump in 2020.

The Sanders campaign said in a statement on Wednesday that the 78-year-old self-described socialist was hospitalised on Tuesday evening after experiencing chest discomfort and ended up having two stents inserted to address a blockage in an artery.

“Senator Sanders is conversing and in good spirits. He will be resting up over the next few days,” said Jeff Weaver, a top aide. “We are cancelling his events and appearances until further notice, and we will continue to provide appropriate updates.”

Mr Sanders followed up later in the day on Twitter to thank well-wishers, using the setback to advocate for his Medicare policy. “I’m fortunate to have good health care and great doctors and nurses helping me to recover. None of us know when a medical emergency might affect us. And no one should fear going bankrupt if it occurs. Medicare for All!”

The campaign suspension comes just four months before the Democratic candidates face their first real test at the Iowa caucuses, which kick off party voting in the 2020 race, followed by the New Hampshire and South Carolina primaries.

Support for Bernie Sanders among Democrats. Joe Biden has 27% and Elizabeth Warren 23%

It also comes at a pivotal point in the Democratic presidential campaign as Elizabeth Warren, the Massachusetts senator whose campaign platform is similar to Mr Sanders’, eclipses the Vermont senator and starts to catch up with Joe Biden, the former vice-president who for months held a significant lead in polls.

Mr Sanders lost the 2016 Democratic primary to Hillary Clinton. But he shifted the centre of gravity in Democratic politics, paving the way for most of the 2020 contenders to move much closer to his positions on issues such as healthcare. 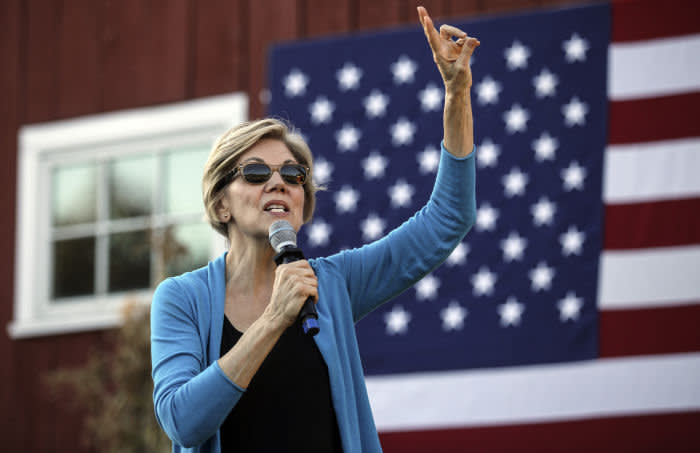 Larry Sabato, a University of Virginia politics professor, said the development could cause problems for Mr Biden, 76, whose age has been called into question by some. But he pointed out that Ms Warren, 70, was “no spring chicken either”.

“The greater danger for Biden is if Sanders drops out. Warren would get a big portion of his votes — not all of them by any means, but likely a plurality,” Mr Sabato added.

Speaking in Las Vegas, Ms Warren responded to the news about her fellow senator: “I know everyone here wishes him well, wants to see him strong and back on the trail as soon as possible . . . I’ve called, I’ve texted and I’ll send your best wishes.”

Mr Sanders hospitalisation came one day after his campaign said he raised $25m in the third quarter of 2019, a significant increase from his already impressive second-quarter haul of $18m. Mr Sanders was far ahead among the 19 contenders who have so far released their second-quarter funding numbers.

Pete Buttigieg, the South Bend mayor who is fourth in the national polls, raised $19m, a strong number but $6m less than his second-quarter total. Andrew Yang, the entrepreneur whose pledge to give Americans a basic universal income has raised him from obscurity, raised $10m, a big increase from his $2.8m haul in the previous period.

Mr Yang has 3.6 per cent support in the polls, just one point lower than Kamala Harris, the California senator who at one point was seen by some as one of the strongest candidates for the 2020 Democratic presidential nomination.

While the Democrats continue to reel in large fundraising totals, however, the Republican National Committee and Mr Trump announced this week that they raised $125m in the third quarter, underscoring how tough the political fight will be in 2020.