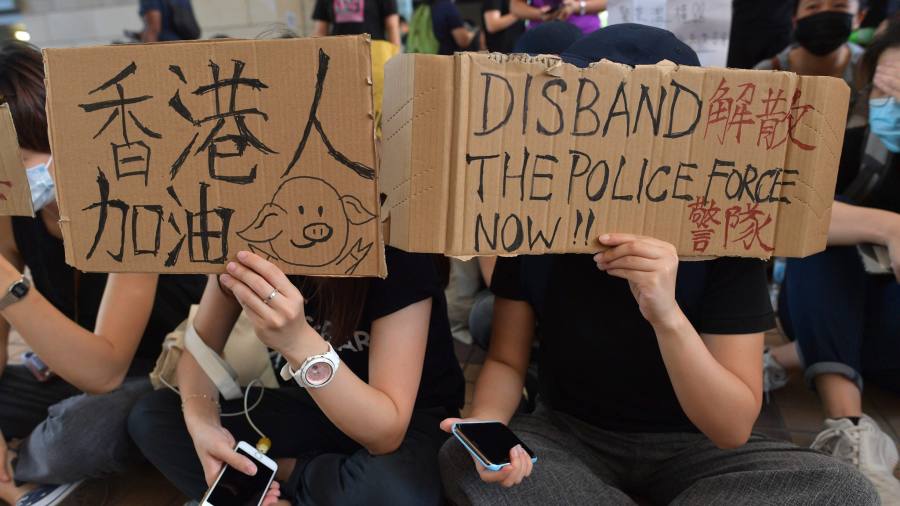 The Hong Kong government is facing growing calls from pro-Beijing politicians and police to invoke emergency laws to contain violent protests a day after the first shooting in the city’s four-month pro-democracy movement.

While protesters held peaceful rallies on Wednesday against the shooting of a teenage demonstrator, the Democratic Alliance for the Betterment and Progress of Hong Kong, a pro-Chinese government political party, called on the government to enact a colonial-era law that would give it greater powers to arrest suspects and tighten press controls.

The law was necessary to “safeguard residents and their property [and] to allow society to return to order”, DAB said in a statement. “This unfortunate situation stems from radical violent protesters’ . . . intent to create bloodshed to achieve their political goals.”

Protesters and police clashed across the Asian financial hub on Tuesday in demonstrations designed to coincide with national day celebrations in Beijing to commemorate 70 years of communist rule.

President Xi Jinping held the country’s biggest military parade to show off China’s military and international clout. But the festivities were overshadowed in international media reports by images of the shooting, in which a policeman fired his revolver at a teenage protester who was among a group attacking officers.

The incident drew condemnation from US senator Marco Rubio, who is pushing the Hong Kong Human Rights and Democracy Act, a proposed law that would place sanctions on Chinese officials who suppressed “basic freedoms” in the territory.

“As Hong Kong continues to violate the basic rights of its citizens the US [and] the world are watching,” he tweeted.

Mitch McConnell, the Republican senate majority leader, also took a swipe at China in contrast to President Donald Trump, who congratulated Mr Xi over the 70th anniversary on Tuesday.

“It is darkly fitting that on the 70th anniversary of the PRC [People’s Republic of China], its agents would be reduced to using force against protesters in Hong Kong who seek to preserve basic personal freedoms,” Mr McConnell said in a statement.

China accused the US and UK, which has criticised the use of live ammunition, of “double standards”. The Office of the Ministry of Foreign Affairs in Hong Kong added that it strongly opposes such “gross interference”.

But Stephen Lo, Hong Kong’s police commissioner, said the officer who shot the protester acted in self-defence. The 18-year-old, who is in stable condition, was among more than 200 people arrested on Tuesday for offences including rioting and unlawful assembly.

The city’s Junior Police Officers’ Association backed the calls from the pro-Beijing politicians for tougher powers, saying the force was fighting alone and needed the emergency law to help it end the violence.

But any attempt to enact Hong Kong’s Emergency Regulations Ordinance, which was introduced by the British colonial government in 1922, would probably provoke further outrage from the pro-democracy movement.

“He is only a kid [the teenager who was shot] . . . The shot has of course fuelled my anger,” a banker identifying himself only as Brian said on Wednesday. He was among several hundred office workers wearing suits who staged a peaceful demonstration during their lunch break in Hong Kong’s central business district.

Separately on Wednesday, 96 people, aged from 14 to 41, appeared in court charged with rioting following a protest on Sunday.

Hundreds of supporters crowded outside the court, chanting: “Regain Hong Kong, revolution of our times.”

The demonstrations have had a significant impact on retailers. In August, they suffered their worst month since records began, with sales falling 23 per cent year-on-year as protests deterred tourists and caused shops to close on weekends.

At several locations in Hong Kong on Wednesday night, protesters staged mostly peaceful demonstrations to express their anger at the shooting.

In Tsuen Wan, an outlying neighbourhood where the teenager was shot by police, thousands of protesters gathered holding signs that read, “don’t shoot our kids”.

As the night went on, large angry crowds spilled on to major roads, erected barricades to block traffic and lit fires in some locations. Other groups vandalised subway stations and ATM machines belonging to Bank of China.