Global stocks fell heavily on Wednesday, with the UK market having its worst day in more than three years, after poor US jobs data compounded weak manufacturing reports and geopolitical fears — a pile-up of risks that sets the stage for a rocky fourth quarter.

The UK’s benchmark FTSE 100 closed 3.2 per cent lower, the largest one day fall since January 2016 and exceeding the decline that followed the UK referendum in June 2016. The US S&P 500 fell 1.8 per cent, and the tech-heavy Nasdaq closed down 1.6 per cent.

The sell-off suggests the growth concerns that have been pumping up bond markets this year are belatedly leaking into global stocks — a shift that many investors would view as an overdue correction.

Equities have been “pricing in the least risk” from simmering trade wars between the US and China, UBS remarked in a note. “In contrast, bonds are pricing in higher risk, but we think they are more likely to be proven right than equities.”

Energy and financials were the worst performing sectors of the US stock market, both falling more than 2 per cent. Real estate and utilities, the safest corners of the market, fell the least. 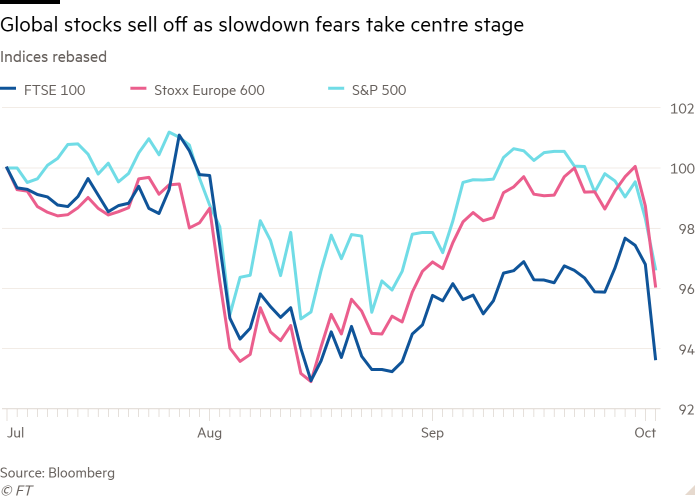 The shift shows that investors fear poor US jobs data could spill over into lower consumer spending, said Liz Young, chief market strategist for BNY Mellon Investment Management. “If the labour market starts to weaken and we start to see lay-offs, then the consumer will start to get nervous,” Ms Young said.

Private employers in the US added 135,000 jobs last month, according to payrolls processor ADP, compared with a downwardly revised 157,000 in August — the figure for that month had previously been recorded at 195,000.

The September figure was the weakest in three months, missing economists’ expectations for 140,000, according to a Reuters survey. On Tuesday, a US manufacturing survey showed its weakest reading in a decade, while a global measure of the sector showed contraction for the fifth month in a row.

“The market is grappling with this intellectual tug of war,” said Ron Temple, head of US equities at Lazard Asset Management. “On the positive side, the vast majority of the consumer data still looks pretty good. On the negative side, there is this global industrial slowdown.”

Stocks fell across Europe. The DAX index of German blue-chips shed 2.5 per cent, while the continent-wide Stoxx 600 was 2.6 per cent lower.

Sterling — the markets’ favoured barometer of Brexit risks — was unmoved on the day at $1.23, suggesting that the UK’s long-running political drama was not the key factor in the FTSE 100’s weakness. Investors are nonetheless watching negotiations with the EU closely. “The whole situation will get more volatile as we get closer to the October 31 deadline,” said Max Gokhman, head of asset allocation for Pacific Life Fund Advisors.

“If you were sitting around for some geopolitical good news to offset the softness in the macro data, that isn’t happening,” Mr Lafferty said. “Things are getting dicier for [US President Donald] Trump and impeachment. [Elizabeth] Warren is surging in the polls and Boris Johnson is continuing to threaten a hard Brexit.”

The benchmark 10-year US Treasury yield fell a further 4 basis points at one point on Wednesday, to 1.59 per cent, and futures markets indicated traders’ increasing expectations of another rate cut by the Federal Reserve at its meeting at the end of this month. Lower yields reflect higher prices for these safe haven assets.

“It seems like the manufacturing data really spooked people,” said Jon Hill, an interest rate strategist at BMO Capital Markets. “It was really bad. Then ADP today didn’t change the narrative. It confirmed the slowing pace of job growth.”