Manufacturing activity is contracting across advanced economies, according to a raft of data released on Tuesday that pointed to the impact of US President Donald Trump’s trade policies.

In the US, a key indicator measuring activity recorded its lowest level in more than a decade for September, while global data showed the sector was feeling the chill wind of recession amid fears that trade tensions will escalate further.

Output this summer was lower than a year earlier across all 36 advanced economies and sentiment indicators show that it is the most geographically widespread manufacturing downturn for seven years.

The global purchasing managers’ index in September recorded its fifth month below the 50 mark, the level that divides expansion from contraction. That was the longest period that indicator has been so low since 2012.

The PMI for the eurozone fell to 45.7 last month, down from 47 in August and its lowest reading since October 2012. The Institute for Supply Management index of US manufacturing activity fell much more than expected to 47.8, down from 49.1 in August, to its worst since June 2009.

“Rather than bet wrong on the policies of someone like President Trump, some companies are putting off investment decisions. Others are being forced to reckon with the consequences of higher costs,” he said.

Although manufacturing is only a small part of global economy, it is one of the most volatile sectors and often acts as a leading indicator of global swings in economic fortunes. 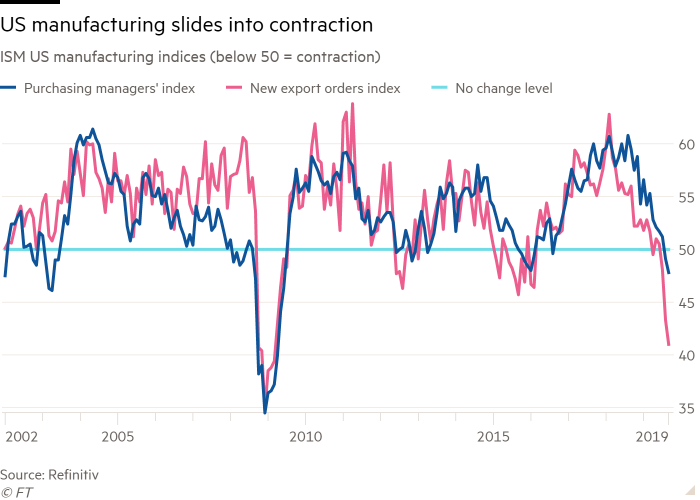 On Tuesday, the World Trade Organization more than halved its estimate for trade growth this year, blaming “escalating trade tensions” for the cuts which it said would leave world trade volumes growing only 1.2 per cent this year.

Roberto Azevêdo, its director-general, said the darker outlook for trade “heighten[s] uncertainty, which is leading some businesses to delay the productivity-enhancing investments that are essential to raising living standards”.

Ian Shepherdson, chief economist of Pantheon Macroeconomics, said the ISM drop in the US was “grim” and while the survey alone was not consistent with a US recession across the whole economy, “the warning signs here are clear enough”.

Similar concerns in financial markets sparked an equity sell-off. The US S&P 500 index was down more than 1 per cent at lunchtime in New York, having opened in positive territory before the manufacturing data was released. The yield on the benchmark 10-year US government bond dropped sharply. Mr Trump took to Twitter to blame the Federal Reserve for US manufacturing woes.

“As I predicted, Jay Powell and the Federal Reserve have allowed the Dollar to get so strong, especially relative to ALL other currencies, that our manufacturers are being negatively affected,” he tweeted.

“Fed Rate too high. They are their own worst enemies, they don’t have a clue. Pathetic!”

Manufacturing activity has been weakening across the world since Mr Trump began to ramp up trade tensions in early 2018 — regardless of currency movements.