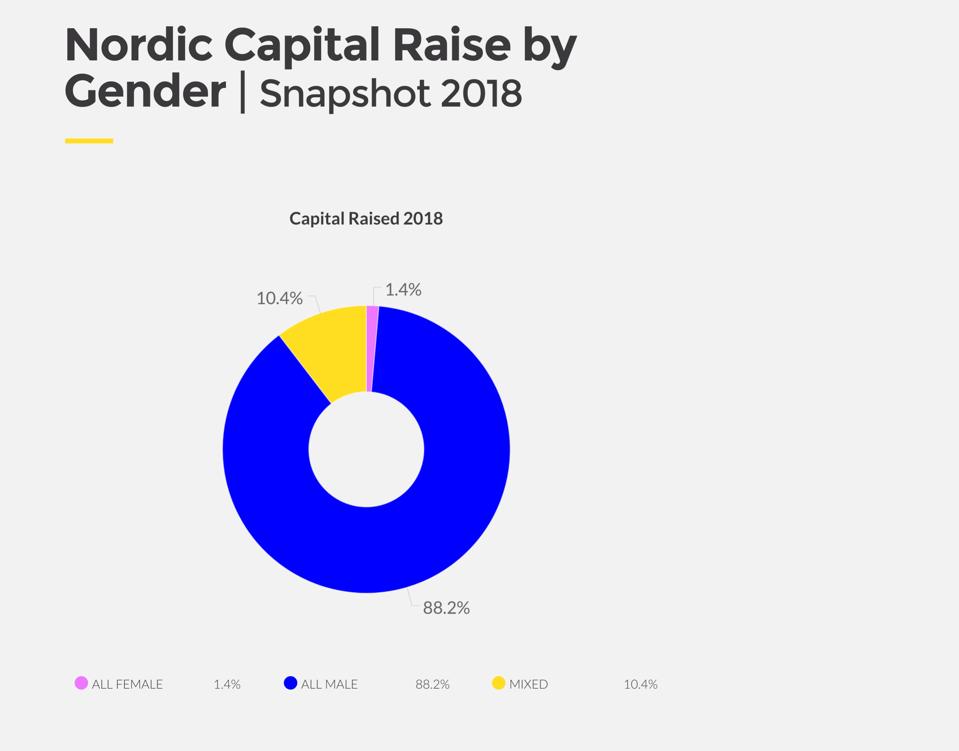 Even before living in Europe, I was in awe of the Nordics. I envisioned Nordic countries as magical places with women welcomed in boardrooms, working mothers supported with generous maternity benefits and childcare subsidies, and babies sleeping peacefully in boxes. Add in healthcare systems that provide high-quality care without staggering cost and good public education for all, and it’s easy to see why Nordic people are amongst the happiest in the world, despite the long dark winters.

My rosy worldview was cracked, though, after investigating the latest numbers on female founders. It turns out that like the rest of the world, the Nordics have some work to do to achieve true gender equity in the tech realm.

The Gap for Female Founders in Nordics Funding

A new report on female founders in the Nordics, led by Unconventional Ventures and Dealroom in partnership with Diversity VC, Backstage Capital, The Nordic Web, Jane VC and others launched last month. The report, “Nordic Startup Funding: Through the Lens of Gender Diversity,” found that the diversity numbers in the Nordics aren’t any better than those in the US. In fact, they are worse for all-female teams.

Even more concerning, while women land 6% of the deals in the Nordics, they somehow only secure 2% of the capital. Female founders in the Nordics who do raise capital tend to raise less per round than male and mixed teams, and must raise it more often. And female entrepreneurs in the Nordics must tap into a more diverse range of funding sources. Especially in Denmark, Sweden and Finland, women are raising disproportionately from corporates, angels and crowdfunding rather than venture capital funds.

But, the Nordics Are Female Friendly!

First of all, it’s important to remember that “the Nordics” does not designate one homogenous place. Technically, this is a term that describes the aggregate of several countries: Finland, Iceland, Norway, Sweden and Denmark. But these countries do share many similarities in terms of progressive views on gender equality.

Finland was the first country to grant the right to vote to women in 1906. And ever since then, the Nordic countries have had a reputation for being progressive in terms of gender equality. Just this year, Business Insider ranked Sweden the “best country in the world to live if you’re a woman” — knocking Denmark down to number two. The criteria for the ranking included scoring on things like human rights, gender equality, income equality, progress and safety. Sweden ranked a 9.8 on human rights and a 9.6 on gender equality, with a shout-out to the fact that 50% of the Swedish government’s cabinet is composed of women.

A New York Times article earlier this year detailed some of these numbers and lent color to why Sweden is such a progressive country for women to live in. When it comes to positions of power in Sweden, gender equity is the norm. And as The Times also notes, “These kinds of ratios of women in positions of political power are shared across Scandinavia, sometimes called the Nordic Nirvana by women’s rights advocates and experts.”

World Economic Forum’s Global Gender Gap Report, which ranks 145 global economies based on how well they’re leveraging their female talent pool, scores countries across nine indicators. Currently, Finland comes out on top, followed by Norway and Sweden. “These countries score highly in most categories,” explains the World Economic Forum, “and take the top spots in labour-force participation. Finland and Sweden have the highest scores for women aged 25-64 when it comes to higher education and the proportion of women in parliament.”

Norway, in fact, has had a law in place for a decade mandating gender equity on corporate boards. Well, near gender equity: technically, the rule is 40% of director seats for women. Norway was the first in a dozen European countries to pass such a law.

It’s an optimistic picture for Nordic women. And the Nordics — particularly Stockholm — are currently a hotbed of tech activity, including companies like Spotify, Klarna, iZettle and King. Which makes the report on VC inequity even more troubling.

The Next Steps for Women in Tech in the Nordics

Like every problem, the first step to finding a solution is acknowledging that there is a problem. With a proactive mindset, the Nordic and global tech communities can work together to bring the numbers into better alignment. The onus is, of course, largely on venture capitalists to actively source more diverse teams. This effort would be helped tremendously by having more female check-writing partners empowered to make funding choices.

Like other tech ecosystems, the gender split of VC decision-making partners in the Nordics is uneven. It’s a documented fact that VC decision-makers gravitate toward entrepreneurs that look like they do. One study by World Bank Group found that female partners invest in twice as many female entrepreneurs as their male counterparts. You can come to your own conclusions about the inverse situation.

Sara Wimmercranz and Susanne Najafi, founders of the Swedish VC firm BackingMinds, are quite familiar with the “psychological tendency of people to be attracted to others who are similar to themselves,” which they say “contributes to homogenous investing.” They’re committed to “backing great underinvested entrepreneurs.” These two founders won the Womenomics Entrepreneurship Award 2019 for their efforts to increase diversity in the Swedish startup scene.

Increasing the number of angel investors willing to invest in women is also important in the Nordics. The VC firm Atomico recently launched a progressive initiative, the Atomico Angel Programme, to “help activate a new generation of angel investors.” This initiative is being led by Atomico partner Sophia Bendz, an active Nordics angel who was an early employee at Spotify (based in Stockholm). Bendz is leading the effort to select and sponsor angels with a diverse perspective and unique networks. The initial list includes twelve angels, eight of whom are women.

Another way to move the needle on gender equity in the Nordics VC scene is more funds focused specifically on gender-lens investing. Unconventional Ventures and my company, Jane VC, are already doing this, but there’s room for many more.

I spent last week in Stockholm and found the tech ecosystem to be progressive and open-minded. Despite the numbers in this report, I came away feeling hopeful that if any place change the dynamic for female founders, the Nordics are a region to bet on. But it will take time. More initiative, more innovative efforts, and, bluntly put, more women in the VC tech scene.

Disclosure: my firm Jane VC was a partner in the Nordic Startup Funding report.