The Federal Reserve is looking at whether regulation played a role in the sudden rise in short-term interest rates that rocked markets last month, when the largest US banks, despite being flush with cash reserves, did not lend them out overnight as expected.

The central bank has indicated that it is focused on the concentration of reserves among a few banks and said it will consider the question at its next monetary policy meeting on October 29-30.

According to policymakers, traders and bank executives, that concentration contributed to the rise in two ways. Larger banks have to meet higher regulatory standards for cash, particularly for same-day liquidity that only reserves can provide. And larger banks have different strategies for their own reserve holdings, which may not include lending them out overnight.

In a speech on Friday, Patrick Harker, president of the Philadelphia Fed, said that some pipes in financial markets “might be rusty — or clogged”, and added that it was “worth asking if regulation might be contributing to any erosion or blockage that might exist”.

Fed data show large banks are keeping a disproportionate amount in reserves, relative to their assets. The 25 largest US banks held an average of 8 per cent of their total assets in reserves at the end of the second quarter, versus 6 per cent for all other banks.

Meanwhile, the four largest US banks — JPMorgan Chase, Bank of America, Citigroup and Wells Fargo — together held $377bn in cash reserves at the end of the second quarter this year, far more than the remaining 21 banks in the top 25.

We have plenty of liquidity, we are just choosing not to lend it out overnight to hedge funds

Since the financial crisis, large banks have been obliged to meet a liquidity coverage ratio (LCR) — a portion of high-quality assets such as cash reserves and Treasuries that can be sold quickly to keep the lights on for a month in a crisis. But regulations also require them to track intraday liquidity — cash they can immediately access — which does not include Treasuries. This additional requirement can vary depending on their business models, which in turn inform supervisors’ and examiners’ bank-specific demands.

Executives at several large banks say this puts a de facto premium on reserves that varies by bank.

“The [one-day] liquidity requirement is massive,” said a managing director at a bank on Wall Street. “There is no way banks can hold anything but cash for that.”

The Federal Open Market Committee has been working for several years to define “ample” reserves — enough so that banks will lend them overnight as a release valve to prevent rates from going too high.

But that estimate came with a warning. In a speech this year, Lorie Logan, interim manager of the Fed’s securities portfolio and a senior vice-president at the New York Fed, flagged the possibility that if reserves are not distributed efficiently among banks, that lowest comfortable level could be higher than the survey estimates.

Mary Daly, president of the San Francisco Fed, suggested bank officer surveys might have limitations as predictors. “People tell you what they’re willing to do,” she told the Financial Times, “but then when it really comes to it, they want to do something different.”

Reserves at large banks have varied over time, suggesting that reserve levels — and willingness to lend them — reflect not just regulatory compliance, but also business decisions.

“We have plenty of liquidity,” said the chief financial officer of a top-10 US bank. “We are just choosing not to lend it out overnight to hedge funds.” 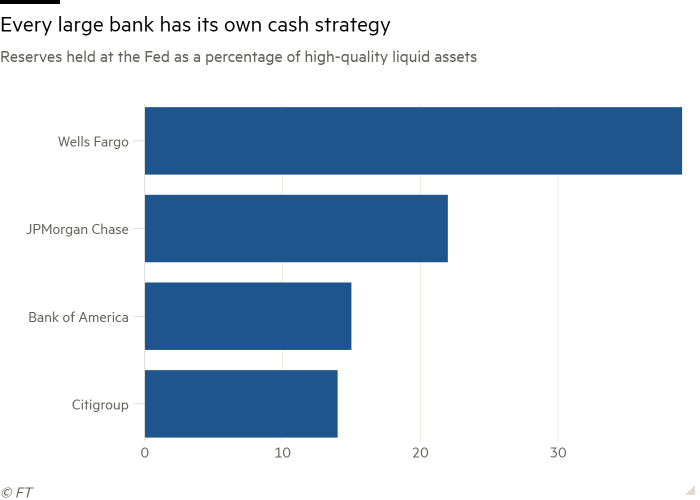 A 2019 paper from economists at the Fed found that more cautious banks held more reserves, but holdings also differed according to “differing business models, products and services, and unobservable, internal operating procedures”.

Second-quarter data from the four largest reserve holders show Wells Fargo held 39 per cent of its high-quality liquid assets in reserves. JPMorgan held 22 per cent, Bank of America held 15 per cent and Citigroup 14 per cent.

“If you have a very large concentration in a few institutions and you lose one or two on any day, then you are losing a major portion of your funding,” said Jim Tabacchi, chief executive at South Street Securities, a broker dealer active in short-term debt markets. “Rates have to skyrocket. It’s simple math.”