Global dealmaking has eased to the slowest pace in more than two years, as fears of an economic slowdown sap corporate confidence and a $200bn tobacco industry merger was abandoned due to shareholder criticism.

Total mergers and acquisitions activity has fallen 11 per cent so far this year to $2.8tn, with roughly $740bn of deals clinched in the third quarter, according to new figures from data provider Refinitiv.

Those sums have been supported by a wave of mega-transactions greater than $10bn in size, which have helped offset a broad decline in dealmaking among smaller companies as well as a slight drop-off in private equity buyouts.

The three months to the end of September proved to be the quietest quarter for announced takeovers since the middle of 2017, even as investment bankers in the US tried to tee up a mega-deal between tobacco groups Altria and Philip Morris International.

But that deal, like several before it, faced a critical reaction from shareholders — with the stocks of both companies declining after the two made public their talks — and ultimately collapsed last week.

“Today’s M&A market is driven by companies looking to become stronger to withstand periods of uncertainty,” said Chris Ventresca, global co-head of M&A at JPMorgan Chase. “There is increased worry that the status quo business plan may not be sufficient to withstand a harsh downturn or prolonged period of uncertainty.”

European dealmaking was down 32 per cent to $556bn compared to the same period a year ago, the slowest since 2017 as uncertainty surrounding Britain’s exit from the European Union weighed on activity. Activity in Asia was also off sharply, hit by a steep decline in Chinese acquisitions, which fell to a 12-year low. 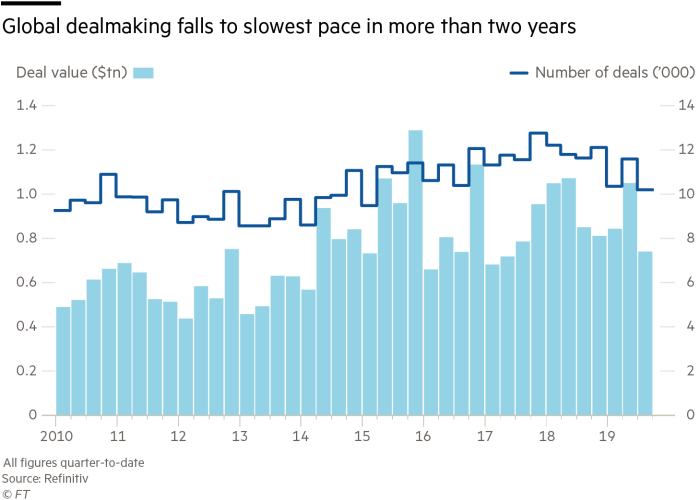 The drop off in Europe came even as investors have cheered a $27bn bid by the London Stock Exchange Group to purchase Refinitiv. The fate of that transaction will become more clear within the next two weeks as Hong Kong Exchanges and Clearing faces a deadline to make firm bid in its efforts to purchase the LSE Group and scupper the Refinitiv deal.

The third quarter saw a dearth of activity among the types of transactions that are critical for Wall Street’s profitability engine. The number of deals agreed this year worth less than $5bn have fallen 11 per cent, including a 24 per cent decline in transactions valued between $1bn and $5bn.

“So a lot of companies are in wait-and-see mode on strategic transactions until they have a better idea on how some of these geopolitical and economic uncertainties will play out,” he added.

Dealmakers admitted that M&A was entering into the final innings of what has been one of the strongest and longest deal cycles in history. But several said that there was still considerable room for expansion given low interest rates and the easy availability of cash on the market to finance transactions. 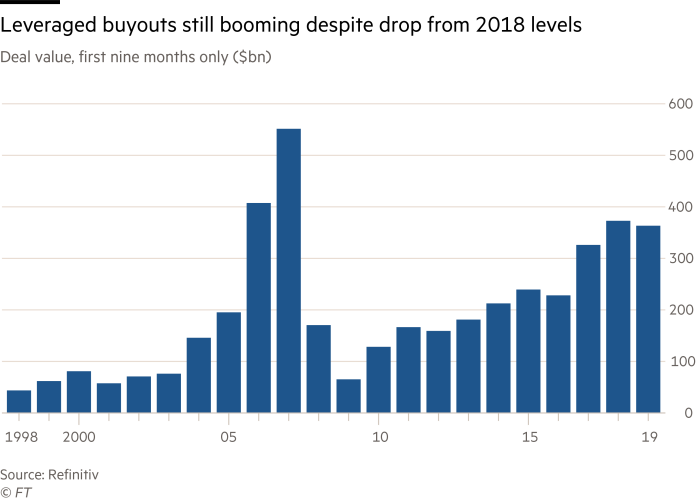 Without singling out any company, James Woolery, veteran dealmaker and head of M&A corporate at law firm King & Spalding, added that he expected many large groups would spin off units or sell assets in a bid to rationalise their portfolios.

This has been true so far this year for companies such as Pfizer, the US pharma giant that spun off its Upjohn unit and combined it with generics drugmaker Mylan to create an off-patent group with an enterprise valuation of about $50bn, as well as brewer AB InBev, which agreed to sell its Australian operations to Japan’s Asahi for about $11.3bn.

Pressure remains on corporate boards to spin-off slower growth units, with campaigns from activists like Elliott Management and Third Point contributing to M&A activity. Elliott, which is one of the most active hedge fund investors, has urged telecom and media group AT&T to sell a number of assets, including DirecTV and HBO. Daniel Loeb of Third Point has directed his efforts at Sony, pushing for the company to spin-off its “crown jewel” image sensor business.

Robin Rankin, co-head of mergers and acquisitions at Credit Suisse, said: “It’s fairly tough to announce deals as well as closing them once they are agreed but there are encouraging signs that things are going to get better.”

She added: “If the economy continues to grow, even at a slow pace, M&A activity should improve. What we are experiencing now is just short term challenges in part due to uncertainty, and disconnect between buyers and sellers.”

The drop in M&A activity is reverberating across Wall Street, which has become dependent on the very largest transactions. Those assignments can be incredibly lucrative, as evidenced by the $123m JPMorgan Chase stands to earn for its role in Botox-maker Allergan’s planned $63bn sale to US pharmaceutical group AbbVie. 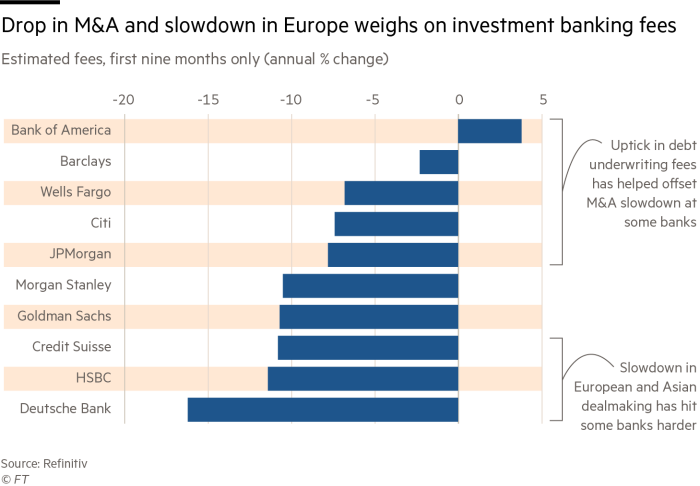 But failure — such as missing out on a big deal or working on one that collapses — can weigh heavily on an M&A department’s earnings. Overall, fees generated from advising on takeovers are down 11 per cent this year to $20.3bn, a five-year low.

Data from Refinitiv shows M&A fees earned by Morgan Stanley, Citi, Credit Suisse and UBS are all down at least 20 per cent so far this year. The majority of fees are paid out when a deal is completed.

The bright spot for many banks has been the surge of debt issuance by their corporate clients, who have sought to take advantage of the dramatic drop in interest rates. Bond underwriting fees have climbed 12 per cent this year to $25bn, the highest level since Refinitiv began collecting the data in 2000.

And despite a number of high profile initial public offerings this year, the number of new flotations has dropped significantly, pushing fees from equity issuance down 16 per cent.

Analysts are expecting a mixed picture when banks begin reporting third-quarter earnings on October 15. Morgan Stanley has warned that the business of listing new companies is “clearly much slower” than a year ago, Citigroup has said it will have lower investment banking fees, while JPMorgan Chase said its investment fees for the third quarter would be “about flat” versus a year earlier.