China is set to parade a massive line-up of its rapidly modernising missile arsenal through Beijing on Tuesday, in a message of deterrence to the US and a demonstration of pride for its own people.

Based on analysis of satellite pictures and photos from rehearsals and videos published by the People’s Liberation Army, the parade to mark the 70th anniversary of the founding of the People’s Republic of China will feature four missile systems that have never been publicly displayed and at least two known intercontinental ballistic missiles (ICBM).

Major General Cai Zhijun, deputy director of the office in charge of organising the parade, has described the event as the first demonstration of the “rebuilding of a strong army” — a key aim of Xi Jinping, China’s president, who ordered a sweeping military restructuring four years ago and has made it a goal for the PLA to become a “world-class military” within 30 years.

The military parade is part of elaborate festivities in which up to 100,000 people will participate, according to state media. It is designed to show off China’s national strength and invoke pride in the weapons Beijing says it developed on its own.

“If the parade’s weapons have a theme it is this: China has the missiles to scare Taiwan, Asia, the United States and the world,” said Rick Fisher, an expert on the PLA at the International Assessment and Strategy Centre, a Washington-based think-tank that does security research for the US government. “China understands that it is now in a missile race with Washington,” he added, in a reference to US plans to place new missiles in Asia after exiting the Intermediate Range Nuclear Forces treaty which barred such deployments.

Alexander Neill, a China specialist at the International Institute for Strategic Studies, the think-tank, said the mood will be markedly different from the last big parade four years ago. “There are lots of balloons and music — they are mainly trying to have a big military party,” he said. “It is very different from the last military parade held in Beijing in 2015 to commemorate the victory over Japan in the second world war, which was a rather solemn affair.”

We want to use this big killer to contain America. Although we have no way to compete with you, we are now developing some unique equipment so that America does not dare to go first against us

But despite the effort to create a festive atmosphere, the core of the military show is deadly serious. One of the crown jewels to be displayed is the Dongfeng-41, an ICBM capable of carrying up to 10 warheads which western defence experts until recently believed was still under development.

“We want to use this big killer to contain America,” said Yue Gang, a retired PLA colonel. “Although we have no way to compete with you, we are now developing some unique equipment so that America does not dare to go first against us.”

Apart from multiple warheads, the DF-41 can also carry decoys, devices designed to exhaust missile defence systems that will be unable to tell whether they are targeting real warheads.

Antoine Bondaz and Sté́phane Delory, two researchers at FRS, France’s leading strategic studies think-tank, have concluded from satellite pictures that more than one-third of China’s entire ICBM arsenal — estimated by the Pentagon at 90 missiles — will be shown at the parade.

Although US military power globally is still by far superior to China’s, America has lost its military dominance in Asia to China in the course of the past decade. At the heart of that change has been Beijing’s development of weapons that can target American warships and US military bases in other parts of Asia, most notably Japan. 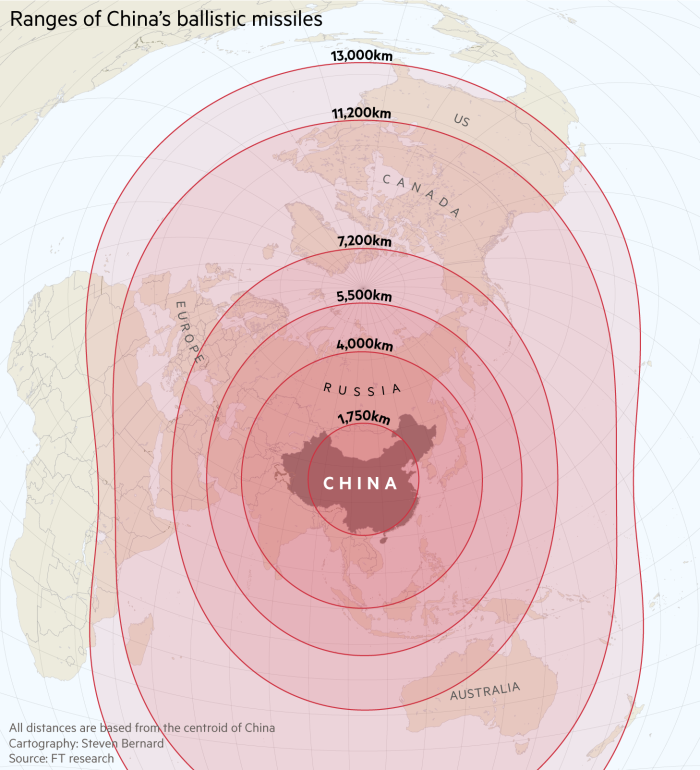 While the two missiles at the heart of that strategy, the Dongfeng 21D anti-ship missile and the Dongfeng 26 Intermediate-Range missile, were the stars of the 2015 parade, the PLA has moved far beyond that stage.

Despite the large number of ICBMs to be displayed, analysts said the most significant progress will be a flurry of new delivery techniques and reconnaissance gear that could allow the PLA to spy, target and attack much faster and more flexibly.

Among the weapons to be shown for the first time is the Dongfeng 17, a missile that can launch a hypersonic glide vehicle for the final attack. Such a vehicle flies at hypersonic speed closer to the earth than the ballistic missile itself, cutting warning times and making it much harder to intercept.

The DF-31, an ICBM known for many years, will appear on a new off-road capable launcher that will make it much more mobile and harder to target with enemy strikes. And a new version of the PLA Air Force’s H6 bomber is expected to come with an installation rack for an air-launched version of the DF-21 instead of its traditional bomb bay — a mechanism that will further extend the missile’s range and make its use more flexible.

Moreover, a range of unmanned systems are set to premiere at the parade: the Li Jian, or Sharp Sword, a long-range stealth combat drone, and the WZ-8, a supersonic or hypersonic reconnaissance drone.

In combination with the DF-17 and its hypersonic glider, the two FRS analysts believe, the WZ would enable China to “develop its conventional strike strategies into much more advanced models than those currently available, even in the United States”.