When Matt Radwell, a customer support officer for a small local authority in the UK, first started answering queries from the area’s residents, it was a frustrating and time-consuming business. If a resident contacted Aylesbury Vale District Council, 40 miles north of London, about an issue like housing benefit in which he lacked expertise, Mr Radwell might keep the caller waiting as long as 20 minutes. He had to find someone who could give him the relevant information.

Over the past two years, however, his job has been transformed. When a resident types a question into the council’s online chat facility, an advanced computer system starts reading it.

For around 40 per cent of inquiries, the system — which has been trained to recognise residents’ questions by using machine learning, a form of artificial intelligence — presents Mr Radwell and other customer support officers with a series of potential, pre-written responses. Each is labelled with an estimated probability of its being the correct choice. If one is appropriate, Mr Radwell clicks on it, satisfying the resident far more quickly and easily than before.

The council’s machine learning system — provided by Digital Genius, a San Francisco-based specialist in customer service systems — has put it at the forefront of a transformation under way in millions of white-collar jobs worldwide.

The relentless advance of robotics and AI in the workplace has focused attention largely on the impact on manual labour. In many of the parts of the developing world that have yet to see a wave of industrialisation and the employment boost that it can bring, there is a fear that they might have already missed their chance, given the growing use of automation in factories. 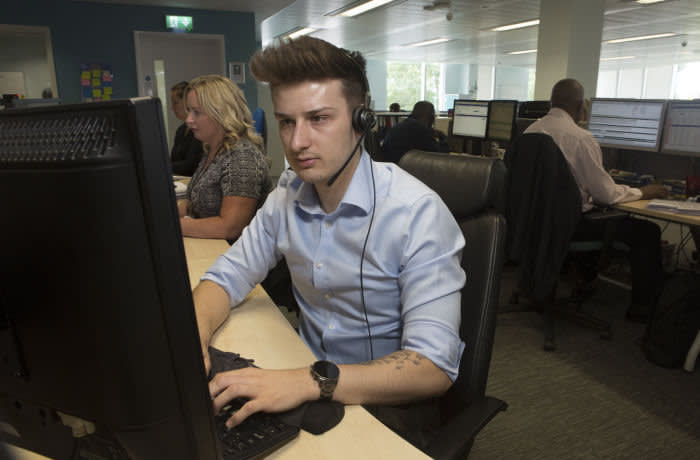 AI being used by Matt Radwell, a customer support officer at Aylesbury Vale District Council. His job has been transformed in the past two years © Tom Pilston

However, the growing power of software such as Digital Genius has opened up the possibility that new, intelligent systems will vastly improve the productivity of a range of office jobs from clerical to professional roles — which will reduce some of the drudgery involved in menial tasks but could lead to some people losing their positions.

In The Globotics Upheaval published earlier this year, Richard Baldwin, professor of international economics at the Graduate Institute Geneva, predicts that white-collar jobs will be swept away faster by digital change than in any previous economic transformation.

“The explosive potential comes from the mismatch between the speed at which disruptive energy is injected into the system by job displacement and the system’s ability to absorb it with job creation,” Prof Baldwin writes.

The potential impact goes beyond relatively basic customer service roles such as Mr Radwell’s, extending into professional services roles such as insurance and law that have seemed wholly reliant on humans’ judgment and understanding. Research last year by PwC, the consultants, found that 30 per cent of jobs in finance and insurance in developed economies were at risk of automation by 2029 and that in the same period 50 per cent of all clerical roles in the same countries were imperilled by automation. 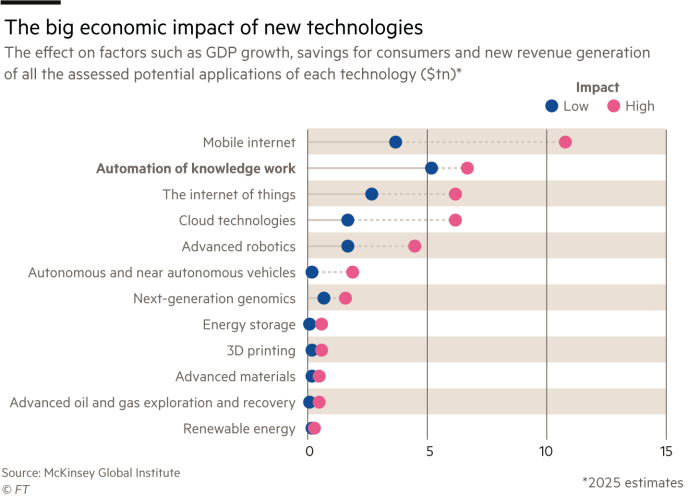 “Artificial intelligence will enable us to do . . . things that weren’t possible previously, or do things that are possible now [but] with far less effort and at lower cost and provide a better customer experience,” Mr Lewis says.

Yet a look around Mr Radwell’s still-busy open-plan office raises questions about how rapidly the changes under way will sweep through offices.

Digital Genius has allowed the customer service team to leave two roles on the team unfilled — it otherwise might have had to take on extra staff to handle the growing volume of calls from the area’s expanding population. But the team still employs eight people.

This experience backs up the arguments of Richard Freeman, an economics professor at Harvard University who studies the impact of technology on work. Prof Freeman predicts few companies would be able to make sweeping changes such as dismissing their accounting department wholesale and leaving only a couple of people to manage the computers.

“I think the disruptions are going to be slower than people are claiming,” he told a seminar held by the Oxford university Business and Economics Programme in July.

You are still going to need people. The skillsets they deploy and what they actually do will change

Mr Radwell rejects the idea that the introduction of Digital Genius threatens his future employment prospects, saying it has made the team “smaller but more versatile”.

“We can take more stuff on and there are fewer people here,” he says. “I wouldn’t say it’s put my job at risk — it’s made my job better.”

There are undoubtedly fields where machine learning systems, which are trained to analyse and quickly spot patterns in pools of data too big for humans to detect, have given employers extraordinary new capabilities.

Engage Talent, a start-up based in Charleston, South Carolina, analyses recruitment and retention patterns at companies, tracking thousands of public data sources, such as companies’ ratings on Glassdoor, the employment site, analyst ratings, share price movement and regulatory action. It uses the information to advise clients on questions such as when might be a good time to approach staff at a rival.

Matt Pietsch, Engage Talent’s chief revenue officer, says its models flagged up in advance a series of redundancies at Tesla, the electric carmaker. Signs from its model of unhappy staff had been “spiking” months before Elon Musk, the company’s chief executive, tweeted about its restructuring plans in June, according to Mr Pietsch.

“If I’m a recruiter and I have the data from our system and I want to recruit people from Tesla, I’d want to target individuals on April 1 versus when the announcement is made and 6,000 other recruiters are targeting them,” Mr Pietsch says. 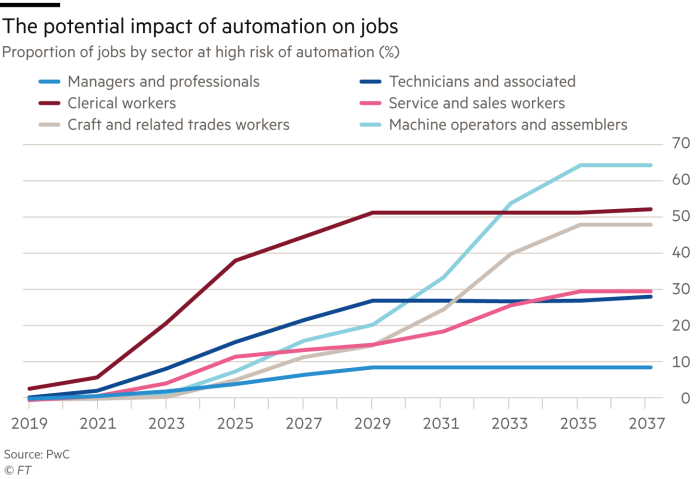 It is a far bigger challenge, however, to fit machine learning into existing roles where employers and customers have become used to the strong sense of intuition and flexibility of human staff.

The issues are clear in the low-rise glass block housing the Swindon offices of Zurich, the Swiss insurer, which handles everything from the processing of insurance claims to back-office functions such as human resources. Staff at the office 85 miles west of London have seen some significant benefits from robotic process automation or RPA, a relatively simple form of automation that takes over some predictable clerical tasks.

Among the benefits of RPA have been that human resources staff no longer spend three days at the start of every month reconciling ledgers of the scheduled deductions from staff’s pay packets with the actual deductions the system is due to make. The RPA software does the reconciliation itself and flags up only apparent errors for humans to solve.

RPA has reduced the number of staff needed in parts of Zurich’s businesses, although the company says it seeks to redeploy those affected, often by training them in automation.

“The team know exactly which ledgers they need to investigate,” Dan Humeniuk, an automation consultant for Zurich, says of the HR staff. “They go and speak to the team members and investigate, without having three days from hell at the start of every month.”

It is less clear, however, that machine learning is poised to take over more complex analytical and sorting work, such as the assessment of insurance claims for car crashes or burglaries. Alastair Robertson, Zurich’s head of continuous improvement and automation for the UK, is one of many in the field to express doubt about whether current systems are up to the task.

When Zurich ran a pilot scheme three years ago using machine learning to sift claims, humans had to override the computer’s decision too often for the technology to be worthwhile. 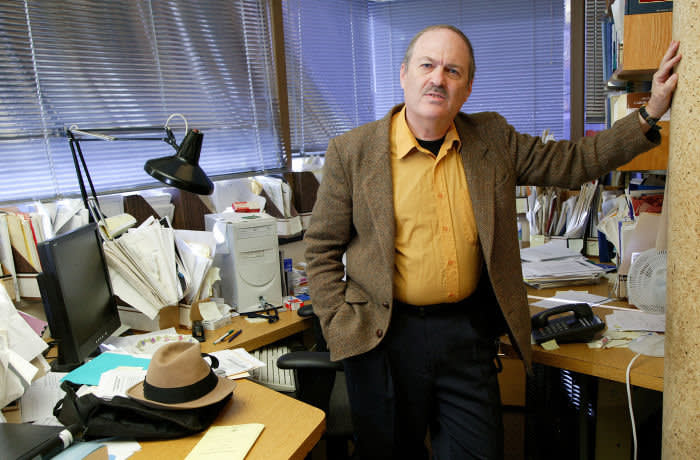 “While it could give a there-or-thereabouts picture, the individual was still having to step in,” Mr Robertson says. “We’ve piloted it. We’ve found out what the software can do and what it cannot do. So it’s not something we’ve rolled out.”

The claim that machine learning is unable to match the reliability and accuracy of human staff is a widespread one. Ben Allgrove, head of global research and development for Baker McKenzie, the law firm, says that, in insurance, only operators dealing with high volumes of routine, low-level claims have so far found the technology useful.

A number of insurers — including Japan’s Fukoku Mutual Life — have said they are handling routine claims processing to machine-learning systems. Walmart, the US retailer, uses the technology to handle personal injury claims.

“What is common about those two fact patterns is high volume, highly standardised,” Mr Allgrove says. “Yes, you can automate. How much you can automate probably depends [on what standard you want to achieve].”

Even for organisations that have enjoyed success with machine learning, there has been considerable cost and effort. While Aylesbury Vale District Council is confident that Digital Genius has paid for itself in reduced salaries and improved service to local residents, the council faced a huge challenge feeding the system with sufficient data about residents’ needs.

Maryvonne Hassall, the council’s assistant director for digital transformation, says it was only after four months of pilot programmes that the system started to show enough understanding to be a useful tool. “You need to work with it to help it to learn,” she says.

“People [are] figuring out where is it that the investments make sense when the legal industry is so fragmented and segmented that those business cases are so hard to come by,” he says. “Finding the main use case that makes economic sense at the moment is not easy.”

Instead, workers are likely to find evolutionary new technologies being gradually introduced beside them. Mr Allgrove compares the process to how typing pools have disappeared from offices but many personal assistants are still employed by senior executives.

“Individual jobs will change with the organisations,” he predicts. “But you are still going to need people. The skillsets they deploy and what they actually do will change.”

Finance and insurance jobs in developed economies at risk of automation by 2029, according to PwC

Prof Freeman told the July seminar in Oxford that people often expected rapid introduction of new technologies in white-collar environments. They saw them as similar to blue-collar roles, where a robot could often be inserted into a process without disrupting the wider system.

But that misunderstood how white-collar roles fitted into most organisations. “If you’re bringing in the latest accounting software, the company has to change the way it’s doing reporting, controls, to do a lot of stuff,” he said. “It’s actually a much slower process of adjustment.”

Some participants are confident that improvements in machine-learning technology will eventually bring tasks such as assessing insurance claims within reach of automation. Zurich’s Mr Robertson acknowledges there is software available that is “starting to go on that track”, although his company is not yet ready to deploy it.

But, for many involved, the experience of automating knowledge work has reinforced not only the potential of new technologies but also the many, continuing advantages of dealing with intelligent, flexible humans.

Mr Allgrove acknowledges that lawyers increasingly rely on machine-learning systems capable of scanning huge numbers of relevant legal cases to assess their chances of a success in a given case. But he insists the best lawyers’ judgments and their relationships with clients still trump such software.

“The litigators who are most trusted in the market say, ‘We probably only have a 50-50 chance of winning but this is a case we must fight’,” he says. “We feel that the world has changed; social positions have changed slightly; the nature of the bench has changed’.”

Echoing the views of people in many white-collar sectors, Mr Allgrove insists that the ability to exercise such nuanced judgments remains a “high-value skill”.

“I think for the foreseeable future — by which I mean five to 10 years — that’s still there,” Mr Allgrove says.