The whistleblower at the heart of the impeachment inquiry into Donald Trump has agreed to appear “very soon” before members of Congress, a top Democratic lawmaker said on Sunday, tightening the screws on the US president in the unfolding Ukraine scandal.

As White House aides and Republican allies struggled to contain the political fallout from the case, Adam Schiff, the chairman of the House intelligence committee who has taken a leading role in the impeachment inquiry, told ABC News that his panel would be receiving “unfiltered testimony” from the whistleblower.

Although a date had not been set, the meeting would happen as soon as security clearances had been secured for the whistleblower’s lawyers, and logistical arrangements had been made to protect his identity, Mr Schiff said.

The deal to allow the whistleblower to speak directly to US lawmakers further increases the heat on Mr Trump, who is facing the biggest threat to his nearly three-year-old presidency after the anonymous official said the US president pressured Ukraine to investigate former vice-president Joe Biden and his son Hunter.

Democrats have seized on the whistleblower’s account, and a record of a call between Mr Trump and Volodymyr Zelensky, the Ukrainian president, on July 25, to launch an impeachment inquiry into Mr Trump, only the fourth such action against a sitting US president.

“I intend to hold the president accountable. And I intend to do a thorough investigation,” Mr Schiff said. He added that “what we have seen already is damning” given Mr Trump had tried “to coerce that leader to manufacture dirt on his opponent and interfere in our election”.

Mr Biden is a top contender for the Democratic nomination to challenge Mr Trump in the 2020 presidential election. Compounding suspicions about Mr Trump’s actions, the US president withheld aid to Ukraine as he made the case for help from Mr Zelensky.

Stephen Miller, a top adviser to Mr Trump, dismissed the allegations against the US president as a “partisan hit job” in an interview with Fox News on Sunday morning, and attacked the whistleblower as a “deep state operative, pure and simple” who was “close to” being a spy.

“You have a group of unelected bureaucrats who think that they need to take on this president,” Mr Miller said. 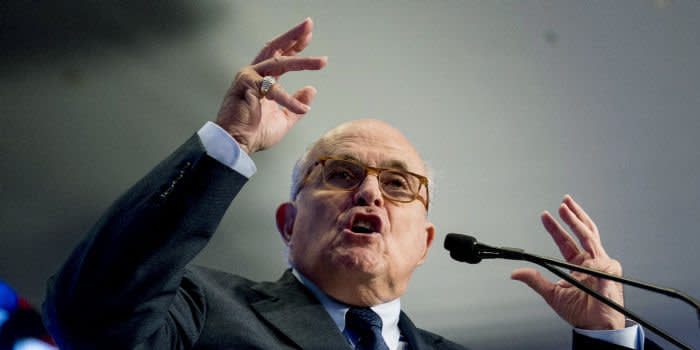 Rudy Giuliani, whose own role in Ukraine as President Donald Trump’s lawyer is under scrutiny, said he would consider testifying in the impeachment probe © AP

Top Republicans on Capitol Hill, with few exceptions, have mostly defended Mr Trump since the Ukraine scandal erupted and the impeachment inquiry was launched. For Mr Trump to be removed from office as a result of the proceedings, at least 20 Republican senators would have to support the decision, meaning the political hurdle is very high. “I have zero problems with his phone call,” Lindsey Graham, the Republican senator from South Carolina, told CBS News.

The furore is unlikely to abate as quickly as other scandals Mr Trump has faced. Not only are Democrats investigating the allegations surrounding the president’s interactions with Ukraine, but they are also looking into moves by other top administration officials — from Mike Pompeo, the US secretary of state, to William Barr, the attorney-general — in support of Mr Trump’s actions, including by shielding them from public view. Nancy Pelosi, the House speaker, has argued that there has been a “cover-up of the cover-up” in the case.

Mr Schiff said Congress would also be seeking records of some of Mr Trump’s conversations with Vladimir Putin, the Russian president, in connection with the scandal.

“I think the paramount need here is to protect the national security of the United States and see whether in the conversations with other world leaders and in particular with Putin that the president was also undermining our security in a way that he thought would personally benefit his campaign,” Mr Schiff said.

Mr Trump has accused Mr Biden of putting pressure on Kiev during Barack Obama’s second term to fire a top prosecutor in the country in order to protect his son Hunter, a board member at a top Ukrainian gas company at the time, from an investigation, even though there has been no evidence of wrongdoing.

In a highly unusual move, Mr Trump dispatched his personal lawyer, Rudy Giuliani to discuss the matter with Ukrainian officials. The former New York mayor said on Sunday he would “consider” testifying in the impeachment probe. “I have to be guided by my client, frankly. I’m a lawyer. It’s his privilege, not mine. If he decides that he wants me to testify, of course I’ll testify, even though I think Adam Schiff is an illegitimate chairman. He has already prejudged the case,” he said.