To 33-year-old entrepreneur Sahra Nguyen, a career jump from the arts to the world of food and drink wasn’t really a jump at all. “Vietnamese and American food culture have always been a thread in my media, film, and community work,” she says. “Increasing visibility and representation for marginalized communities and telling stories about my experience as a first-generation Vietnamese-American [has always been the focus of my work].”

A graduate of UCLA (with a double major in World Arts and Cultures and Asian-American Studies) and the daughter of Vietnamese immigrants, Nguyen made her foray into the hospitality industry in the form of a Vietnamese-American fast-casual restaurant in New York, where she had moved in 2013. A few years later, she parted ways with Lucy’s Vietnamese Kitchen, which eventually closed, and in November 2018 established her very own Vietnamese coffee import and supply company: Nguyen Coffee Supply.

Discussing the origins of her business concept, Nguyen recalls a 2016 trip to Cambodia she had organized to work on a five-part documentary series called Deported, about “the global fight to end deportation.” Nguyen decided to make a pit stop in Vietnam to visit her family first. 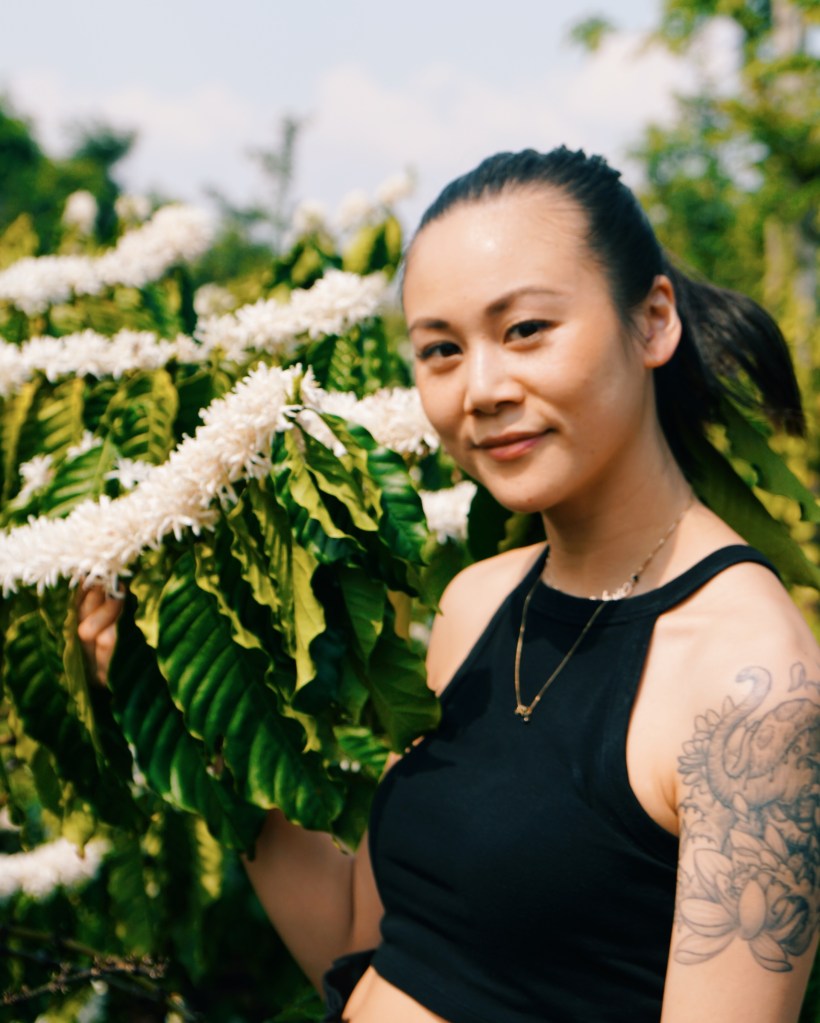 While there, recurring thoughts about the lack of properly prepared Vietnamese coffee in an American society that champions the import of beans from a variety of countries kept nagging at her. After asking family and friends about locals with a farm who would be willing to export beans to the U.S., Nguyen was introduced to Mr. Ton. “My aunt used … to work with him,” Nguyen says. “So we took a plane to go to Da Lat [a city in Vietnam] to meet him, and from then on, it was a lot of research and development.”

The dearth of properly brewed Vietnamese java in the States is still something that propels Nguyen’s business acumen: “Vietnamese coffee as a beverage was popping up on all these different menus in restaurants and cafés,” she says. “However, when I looked into it, a lot of times they weren’t even using Vietnamese coffee beans.”

The entrepreneur is quick to note that although the U.S. is the second largest importer of Vietnamese coffee in the world, only 15% of consumers associate the origin country with the product, a fact that doesn’t surprise her. “Walk into any Whole Foods right now and look for a single-origin Vietnamese coffee bean. It doesn’t exist,” Nguyen says. 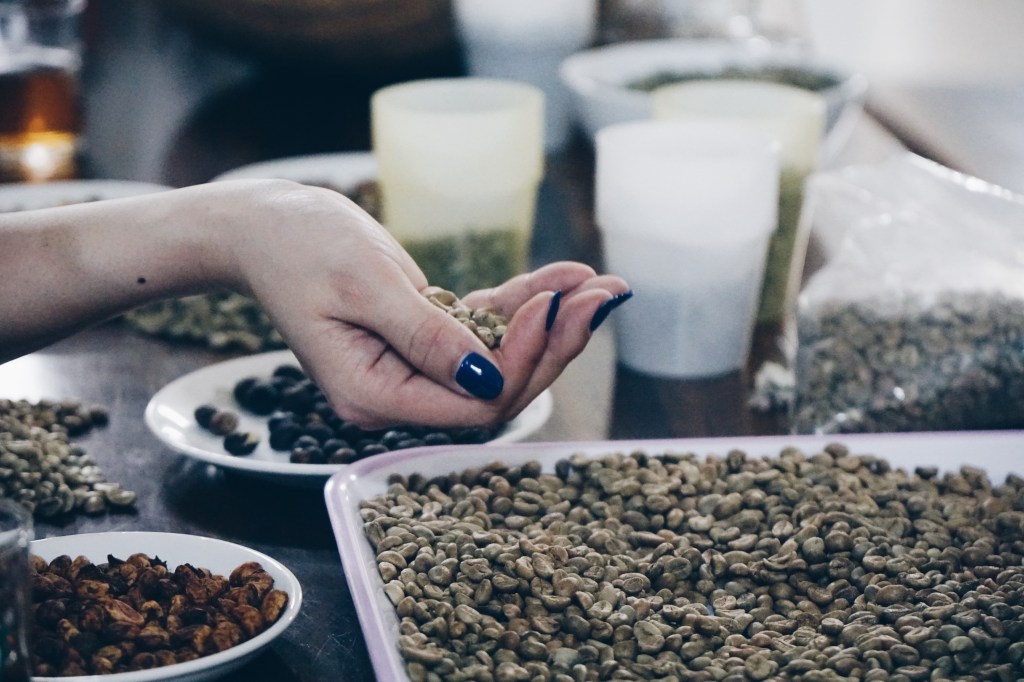 American-born Nguyen, the daughter of Vietnamese immigrants, uses beans grown in Vietnam and roasts them in Red Hook, Brooklyn.

“The go-to brand in my parents’ generation and in a lot of these really old-school Vietnamese restaurants is Café du Monde,” Nguyen notes about the New Orleans–based brand. “It’s not a specialty roasted coffee, and there’s actually not a lot of transparency about where those beans are from, but I’m going to guess it’s a multi-origin blend of maybe South American beans.”

Hence her dedication to the celebration of Vietnamese coffee producers, a concept that Nguyen believes begins with transparency, which she finds to be as important to the marketing of the product as the actual quality of said product.

Today, Nguyen imports green beans—which have been harvested, processed, and are ready to be roasted—from Mr. Ton’s farm in Da Lat. “His practices are certified organic in Vietnam, which means he uses microbiological fertilizers and avoids all toxic chemical fertilizers,” Nguyen says.

After importing the beans, she roasts them herself at a shared roasting facility in Red Hook, an industrial neighborhood in Brooklyn, New York. Although cagey about the amount of beans she roasts and therefore sells each month, Nguyen explains that her company currently offers two blends: One is made with 100% arabica beans, and the other is a 50/50 blend of robusta and arabica. 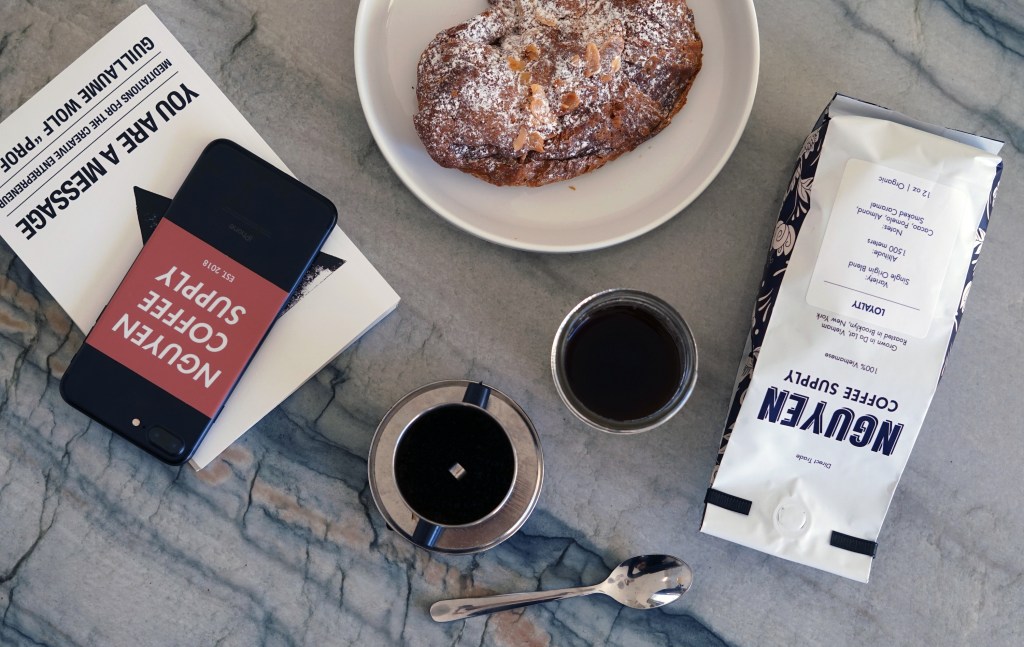 “Robusta beans have 60% less sugar and 60% less fat than arabica beans,” Nguyen explains. In terms of flavor profile, the robusta variety boasts nearly two times the caffeine content of its counterpart and gives off a nutty, full, dark, chocolaty taste. Most important, she notes, “in terms of production, robusta beans are [grown] at a lower elevation, so from an environmental standpoint, they are considered a more sustainable option for the future.” The company is planning on rolling out a 100% robusta coffee variety in the coming months.

In terms of preparation, the entrepreneur suggests that drinkers develop their “own cup.” “There is no right or wrong way to drink [it],” she says, listing French-press makers, espresso machines, and percolators as some tried-and-true options.

Nguyen’s focus on clean coffee mimics a rising trend in Vietnam that locals refer to as cà phê sach, which roughly translates to “pure coffee.” 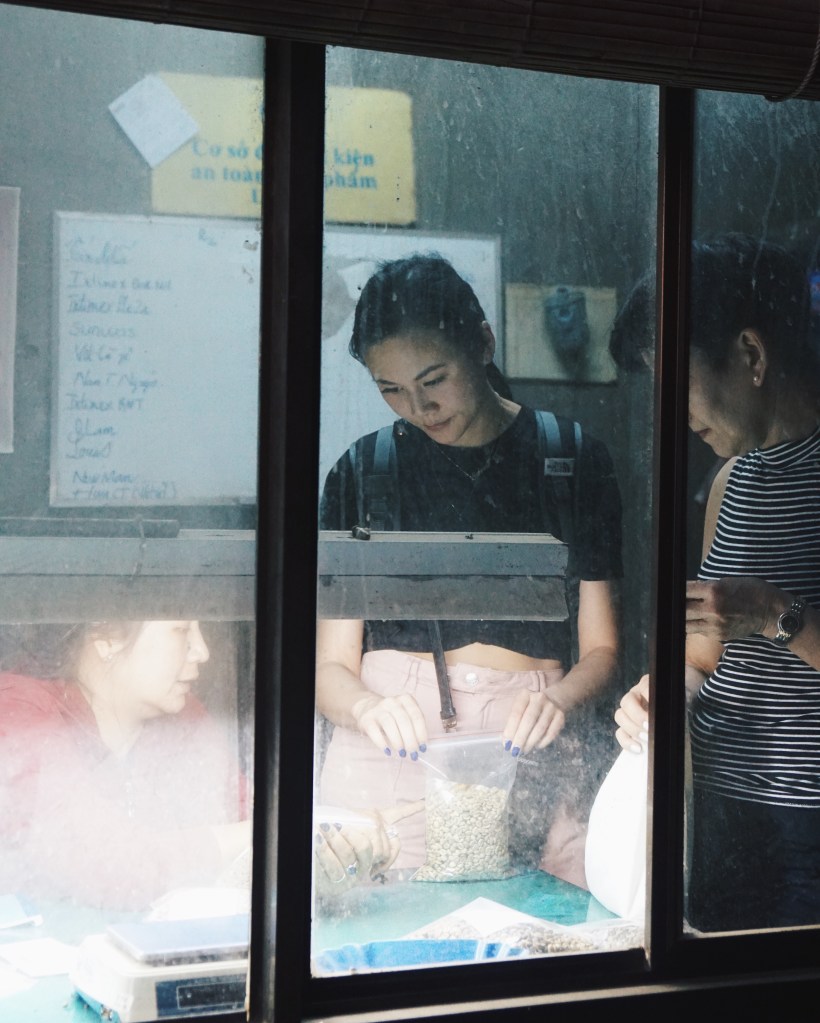 While delving into her plan, Nguyen also mentions Cafe Phin, a coffee pop-up that took over downtown New York for four months in 2019 to showcase the versatility of Vietnamese coffee to the masses. “The experience really showed me that a brick-and-mortar [location] is very necessary to continue growing the conversation, education, and cultural awareness [surrounding] Vietnamese coffee,” Nguyen replies when asked about her plans for the business.

Is that future tainted by the politics of immigration and nationalism that have consumed the U.S. in recent years? Although conversations about sustainability, inequality, and representation certainly stray toward the political, Nguyen says, the way those discussions are presented is what mostly piques her interest: “Are we framing [the producers] as foreign labor or people in the community? Are they just producers of coffee, or are we also celebrating them as producers of culture? I get to talk a lot about these things, so I feel like the world of coffee has been an amazing platform.”

—A new distillery tells the true—and often untold—origin story of Tennessee whiskey
—The celebrity-branded liquor market is oversaturated
—Craft breweries are going hyper-local to source ingredients
—Some of California’s most famous wines came from a science experiment
—White Bordeaux wines are picking up steam. Here’s what you should know

Follow Fortune on Flipboard to stay up-to-date on the latest news and analysis.