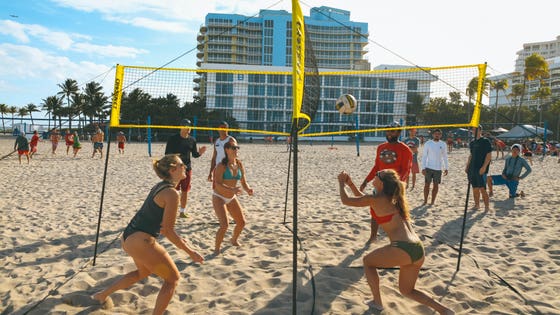 Chris Meade used to wake up on Monday mornings dreading his job as an account executive for a rideshare service in New York City.

“I was cold-calling nonstop,” says Meade. “I was tired of the daily grind of going to work, commuting from Bushwick, Brooklyn to Chelsea.”

Meade could have resigned himself to the situation but instead decided to do something about it and become his own boss. One night Meade, now 26, got together with his brother, Gregory, 25, and their childhood friend Mike Delpapa, 25, to brainstorm a product they could invent together. That was a little over two years ago.

“We sat up all night,” Meade recalls. One thing all three shared was a passion for sports. When they noticed the volleyball highlights on ESPN, they started feeling inspired.

Suddenly, they hit on their idea a four-way volleyball game that merged traditional volleyball with the ball game four square. By dividing the court into four quadrants, rather than in half, they envisioned a game that would be “insane,” in a good way, says Meade.

Even better, when they typed the idea into a search engine, they found no one was offering something similar. Soon they were off and running in turning their idea into a product.

That game is basis for their company CROSSNET, which they started in Sept. 2017. The profitable firm is on track to hit $2 million in revenue this year, with a holiday “stretch goal” of $2.5 million, according to Meade.

Meade has now left the nine-to-five behind. He lives in Miami, where he skateboards to a co-working space when he needs to get things done. Delpapa works from Connecticut, where he lives, and Gregory is in the midst of a three-month trip to Vietnam and living as a digital nomad.

CROSSNET is among the growing number of nonemployer businesses—those with no employees except the owners—that are breaking $1 million a year. The three founders split profits evenly and together own 100% of the company, with no outside investors.

So how did these three founders build a successful company with only a few years’ of work experience and limited resources? Here are the strategies they used:

Find a way to fit a startup into your life. Most people can’t quit their day jobs to start a business and work on it full-time. Meade and his co-founders were among them, so they started the business on the side. Meade, for instance, would work at his full-time job from 9 to 5:30 or 6 p.m., do some work on the subway back to Brooklyn and then work in the evening until 11 pm or midnight every night for about eight months. “ I came home every single night and worked on this bad boy,” says Meade.

That’s not easy to do, day after day, but they were committed. Meade says that some of the motivation he and his brother have comes from the experience of losing their father seven years ago. “We’ve always had the drive and hunger to make things better,” says Meade.

Meade was finally able to quit his job by January 1, 2018–and then it was full speed ahead.

Create a prototype. To make sure their idea was marketable before they invested a lot of money, the partners bought a couple of volleyball nets from Walmart and set up a very rough prototype. “We made up a set of rules: Every man for himself in a free for all,” Meade recalls. Each person would try to eliminate everyone else.

After testing their idea among themselves, they found a manufacturer in China on the giant ecommerce marketplace Alibaba to make a real prototype, which cost them $250. They also patented and trademarked the idea.

Make the most of online advertising. To measure interest in the marketplace, the trio began advertising the product on Facebook, Instagram and Twitter, taking pre-orders for the product through a simple e-commerce site they set up. “We got some good interest right away,” says Meade.

Running ads there not only allowed them to gauge customers’ interest, but also to conduct experiments that guided them on decisions like pricing.

Seeing that the game was moving quickly when they advertised it for a $100 retail price, the founders raised the price to $150. “Customers were just as receptive,” Meade says.

Don’t try to do every task yourself. One common thread among million-dollar, nonemployer businesses is that when the founders need help with tasks they don’t have the time or expertise to handle, they don’t try to do it all themselves. They turn to freelancers and contractors, found through their networks or on freelance platforms.

CROSSNET took the same approach, saving many hours of time for the founders to focus on bigger-picture tasks. Often, these folks revealed multiple talents. One example: “The guy who created the box for our product also created a pamphlet for it,” says Meade

Look for multiple places to sell your wares. CROSSNET’s founders didn’t rely on ecommerce alone as a sales channel. Meade began reaching out to stores, too, finding that the sales skills he’d picked up at his job came in handy. One of the first chains he approached was Scheels, a sporting goods chain in the Midwest. When Meade sent an email to the buyer, he was pleasantly surprised to get a response.

The buyer picked up the product in two stores. Soon they heard back from him. “It sold out overnight,” the buyer told Meade. “I don’t know what happened.”

The retailer ultimately decided to carry it in 22 stores nationwide, providing an opportunity for rapid growth to the fledgling game startup.

Know when to outsource. After the deal with Scheels, Meade could have simply soldiered on as the company’s main sales rep, trying to win each retail account on his own. However, when Spreetail, the distributor for Razor Scooters, got interested in carrying CROSSNET, the trio realized that teaming up would speed the growth of the company, even though there are costs associated with using a distributor. Spreetail is an official Amazon, Target and Walmart distributor, which opened the door to major new sales channels for the young company.

That advantage keeps growing. Soon, for instance, CROSSNET will be sold in Macy’s as a result of this relationship.

“They have a full ecommerce team there,” says Meade. “They’re able to fulfill orders almost the same day. We’re able to offer free shipping for our product. Normally costs $20 to ship. We’ve seen our sales go up really, really nicely.”

CROSSNET has also branched out to selling to schools and teams that want to teach volleyball. It has already sold its nets to 1,500 schools.

Invest in yourself. Many would-be entrepreneurs never bring their ideas to fruition because they are reluctant to risk any of their own money on their ideas.

The founders of CROSSNET didn’t have millions of dollars to spare but they were willing to self-finance the business using savings from their jobs. “You have to have the faith and confidence to take that risk,” says Meade.

Still, they paced themselves. During the early months, they only invested about $2,000 in product development but otherwise kept spending down.

“Always spend within your means,” advises Meade. “It took us 12 months to develop the product.”

The trio put more cash into the business gradually, as orders rolled in, but still took a measured approach to spending. “We didn’t stack up on inventory or things we didn’t need,” says Meade.

Ultimately, Meade estimates that startups costs were about $25,000, but because the founders spent the money so slowly, they never exhausted their personal resources.

Build a brain trust. Looking back at the growth of the business, Meade says one of the most valuable strategies the co-founders used was turning to their personal and professional network for answers when they needed to tackle an unfamiliar task.

“There are lot of learning curves,” says Meade. “My suggestion to other entrepreneurs would be to reach out to friends or other entrepreneurs who are in the same boat as you or have gotten past that step. I have a lot of friends who have been able to mentor me. People love telling their story if they’ve had success with it.”

Diversify your revenue streams. Meade doesn’t bring in all of his income from CROSSNET. He has also bought a warehouse in Connecticut that handles shipping for about 15 different businesses. That company, Shiposaur, brings in six-figure revenue, according to Meade. One of Meade’s friends runs daily operations so it doesn’t take much of his time. This business, though smaller, gives Meade added income as he and his partners grow CROSSNET. Shiposaur currently rents out space to CROSSNET, but the game company will be moving on Oct. 1. CROSSNET has expanded so quickly it needs more space, he says.

Managing all of this takes focus but to Meade, it’s worth it. He and his brother were able to help their mother relocate to Miami, where she found a job in the hotel industry. She enthusiastically promotes CROSSNET on Facebook and, as a ride share driver, to her passengers. “My mom is stoked,” says Meade. He and his co-founders were also in a position to donate to hurricane relief when Miami was hit two years ago.

On a professional level, Meade’s change of career has been fulfilling, too. When Meade talks to his friends, he finds, “Everyone is so unhappy with their 9 to five day jobs. They’re regretting Monday.”

Meade was once among them but has learned from his own experience that it’s very possible to turn things around. Today, Meade looks forward to the start of the week. “I’m eager to go back to working on my businesses,” he says. That’s a great place to be.